I’m slightly embarrassed to admit that I hadn’t visited one of South Africa’s most beautiful regions — the Midlands Meander in KwaZulu-Natal — until recently. Before I continue I’m posting a few more photographs below so that you can see just how beautiful this region is. We spent Thursday through to Sunday at Brahman Hills, exploring Nottingham Road Village and the stretch of the R103 that makes its way towards Howick (it’s worth visiting Howick Falls too). 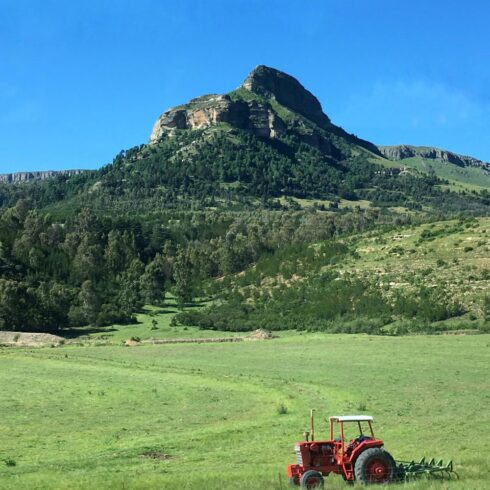 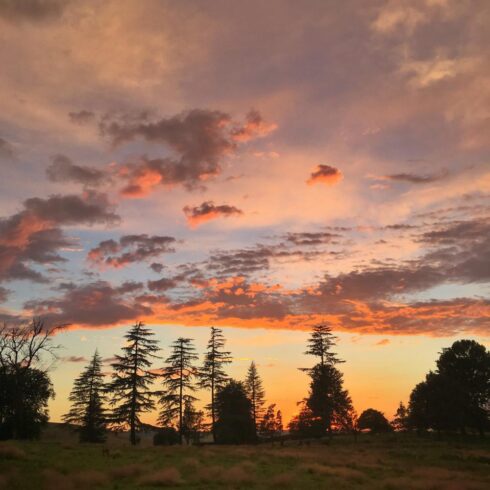 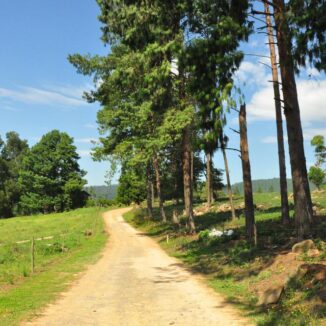 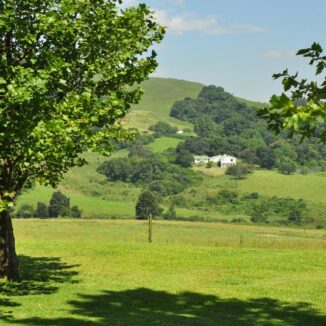 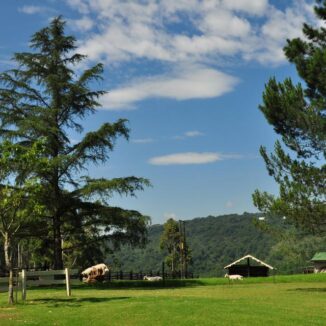 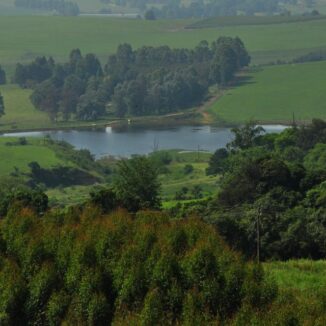 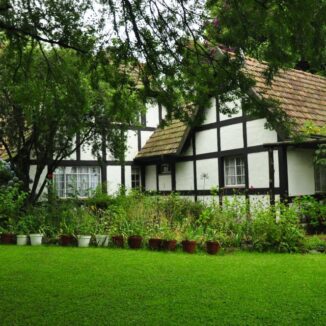 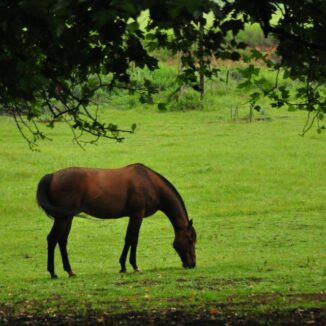 What to do along the Midlands Meander

There are a number of self-drive routes though the Midlands Meander that you can explore at your own pace. You could probably spend anything from two to three days along the length of Nottingham Road, especially if you were to stop at every attraction on the way.

But if you’re only passing by on your way to Durban and only have time to stop at one attraction it has to be the Nelson Mandela capture site. This was the furthest point we visited (in the direction of Durbs). Then we slowly made our way back to the Midlands Meander along numerous other stops. 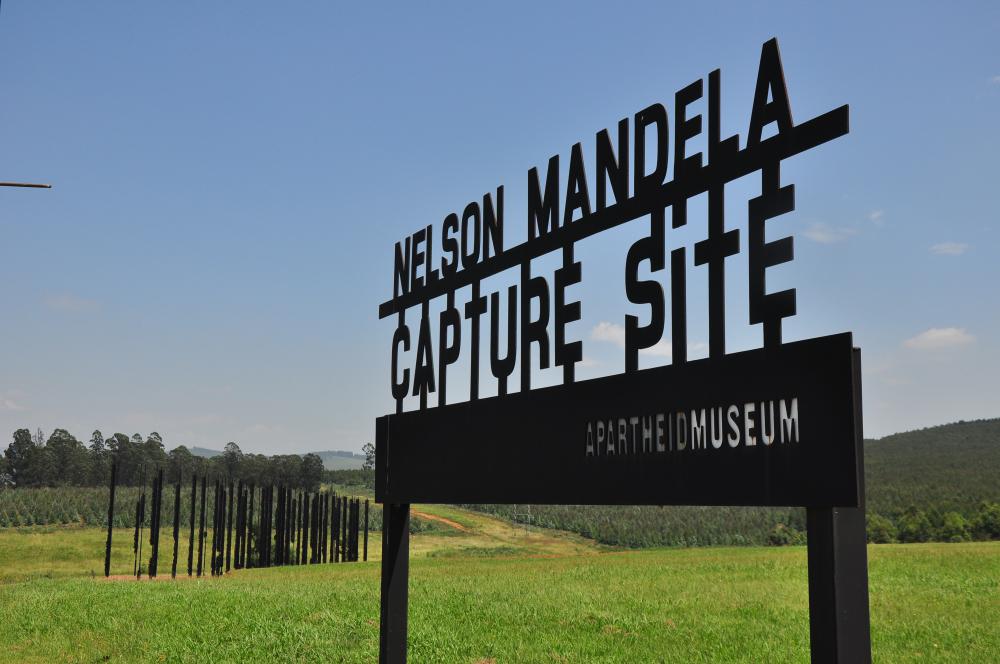 This is the spot where Mandela’s car was pulled over by the police on the 5th August 1962. It’s where he was arrested on charges of leaving South Africa without a passport and calling for a workers strike.

Here are some extracts about that moment from his autobiography Long Walk to Freedom.

“Cecil and I were engrossed in discussions of sabotage plans as we passed through Howick, 20 miles north-west of Pietermaritzburg.

“At Cedara, a small town just past Howick, I noticed a Ford V-8 filled with white men shoot past us on the right… I knew in that instant that my life on the run was over; my 17 months of ‘freedom’ were about to end.

“When our car stopped, a tall slender man with a stern expression came directly over to the window on the passenger side. He was unshaven and it appeared that he had not slept in quite a while. I immediately assumed he had been waiting for us for several days.

“He [Sergeant Vorster of the Pietermaritzburg police] asked me to identify myself. I told him my name was David Motsamayi. He nodded, and then, in a very proper way, he asked me a few questions about where I had been and where I was going.

“I parried these without giving him much information. He seemed a bit irritated and then he said, ‘Ag, you’re Nelson Mandela, and this is Cecil Williams, and you are under arrest!’.

“Cecil and I were locked in separate cells. I now had time to ruminate on my situation. I had always known that arrest was a possibility, but even freedom fighters practise denial, and in my cell that night I realised I was not prepared for the reality of capture and confinement.

“I was upset and agitated. Someone had tipped the police off about my whereabouts. They had known I was in Durban and that I would be returning to Johannesburg.” 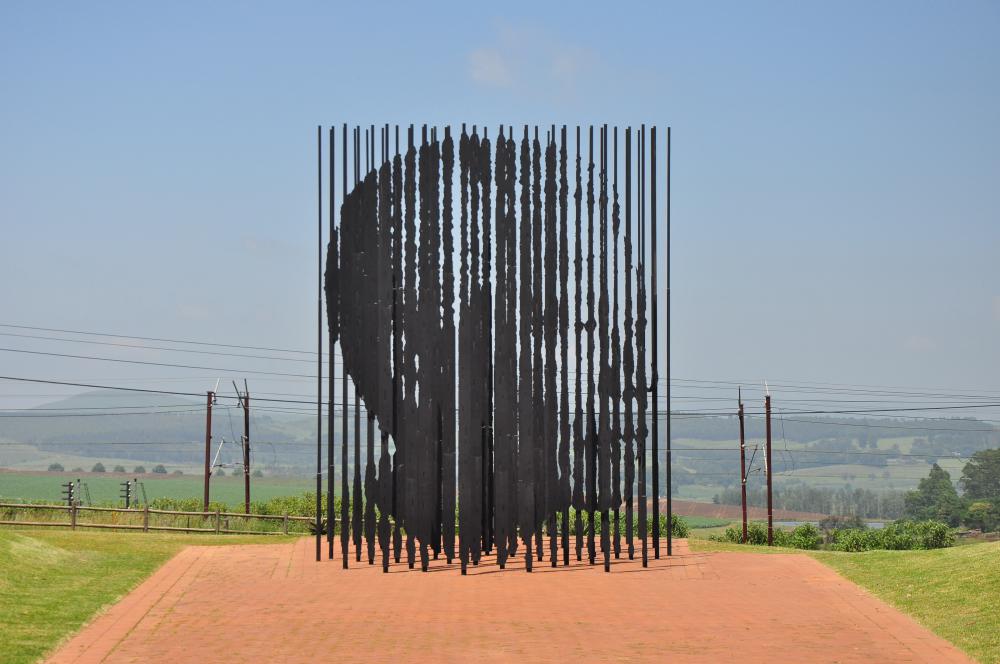 The site is now part of the Apartheid Museum. Entrance to the sculpture and exhibition hall are free, although they accept donations. As we walk along the pathway (which symbolises Mandela’s long walk to freedom) 50 steel poles come together to reveal his face. It’s an interactive artwork that allows us to walk between the poles, which were erected in 2012 to commemorate the 50th anniversary of his arrest. 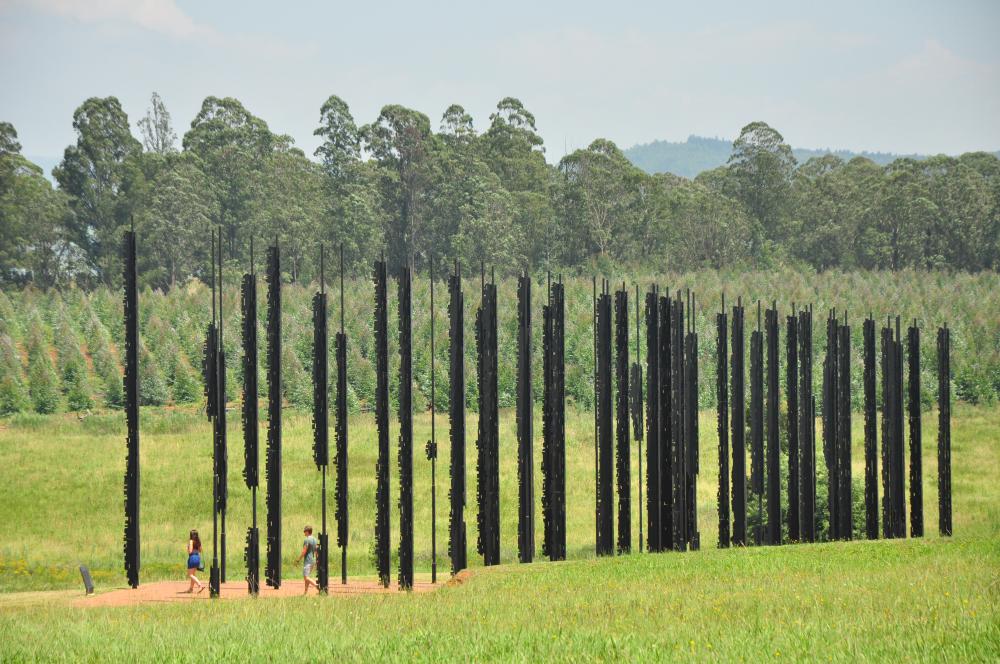 The Patchwood Elephant is less than three minutes up the road (since you’re already here). It’s run by Scottish Lyn Hansen, who we found tending to her garden. They have seven cats and three dogs, which will come out to greet you when you arrive. Lyn takes me on a bit of a walk about. There’s a guinea pig palace (as she calls it) and a little farmyard complete with a pond for the kids. If you’re an antique hunter and love hoarding bric-a-brac then this is heaven. There are crocheted and knitted items, flower vases, kitsch figurines, handmade costume jewellery as well as little bits and bobs that will make for good souvenirs. 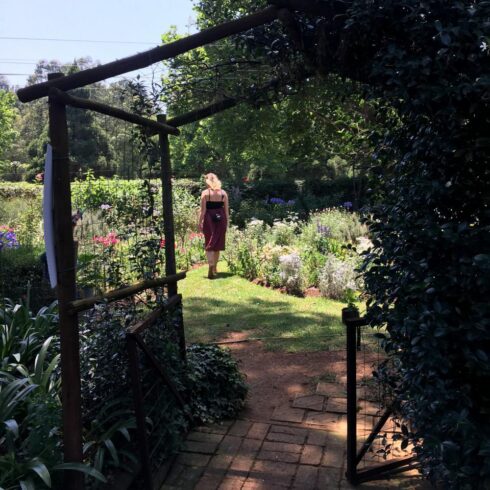 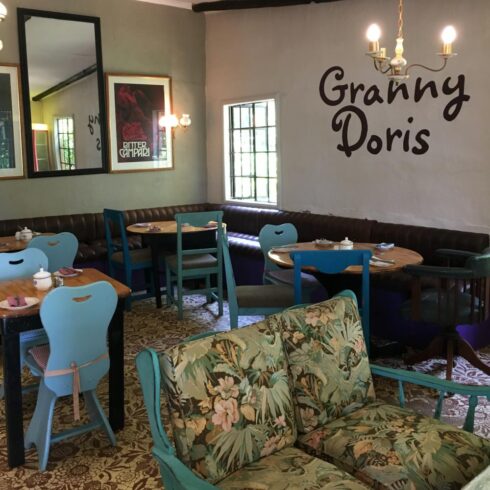 The adjoining Granny Doris cafe and restaurant recently received The Sunday Tribune Cafe Society 2017 for being one of the top 100 places to stop for a cuppa in the Midlands. Sit at a table outside beneath the shade of the trees, as you sip on a cup of Terbodore (more about them later).

Heading back towards Nottingham Road Village you’ll see Mohair Live on your right hand side. Here we watched mohair fleece being spun into yarn. South Africa is the world’s largest mohair exporter. Next door is a waffle house — don’t say I didn’t warn you. And further along you’ll find the Tsonga factory shop on your left, as well as Piggly Wiggly (a kind of strip mall out in the open — not really my style as I prefer the little shops along the road, but hey the kids will probably love the zip line). 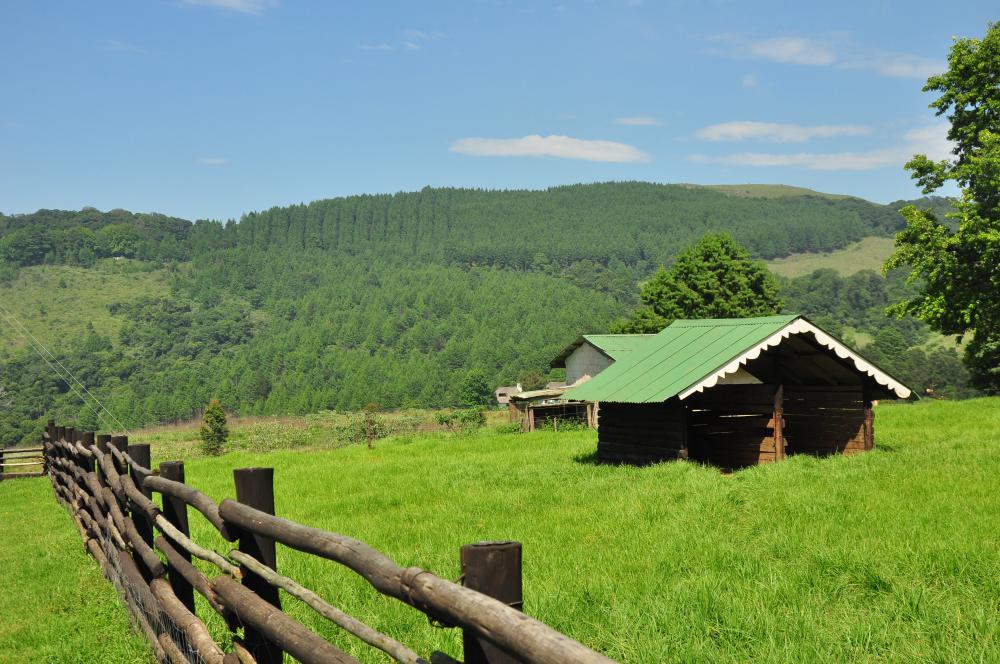 If you’re a cheese lover, like myself, then you must visit Swissland Cheese for their free cheese tasting, which will probably be followed by a spontaneous picnic — they cater for those too. Expect that after you try all their cheeses, from three kinds of chèvre to their cream cheeses, Isinyani (between a Gouda and Cheddar), Pecorino, goats’ milk Brie and their signature St Maure Camembert, you’ll take up their offer to hire their blanket, cutting board, cutlery and multi-coloured plastic cups and buy a selection of cheeses, preserves, crackers and desserts. They make a strawberry cheesecake and various flavours of ice-cream too. Sit on the grass in the shade of the pines with views of the meadows to the sounds of bleating goats and mooing cows — it is a working farm after all. And don’t forget the wine — that’s the most important thing, really. They have a selection of local varietals lined up on their shelves. Beauty Zuma, the shop assistance, will help you pair each cheese with a wine. 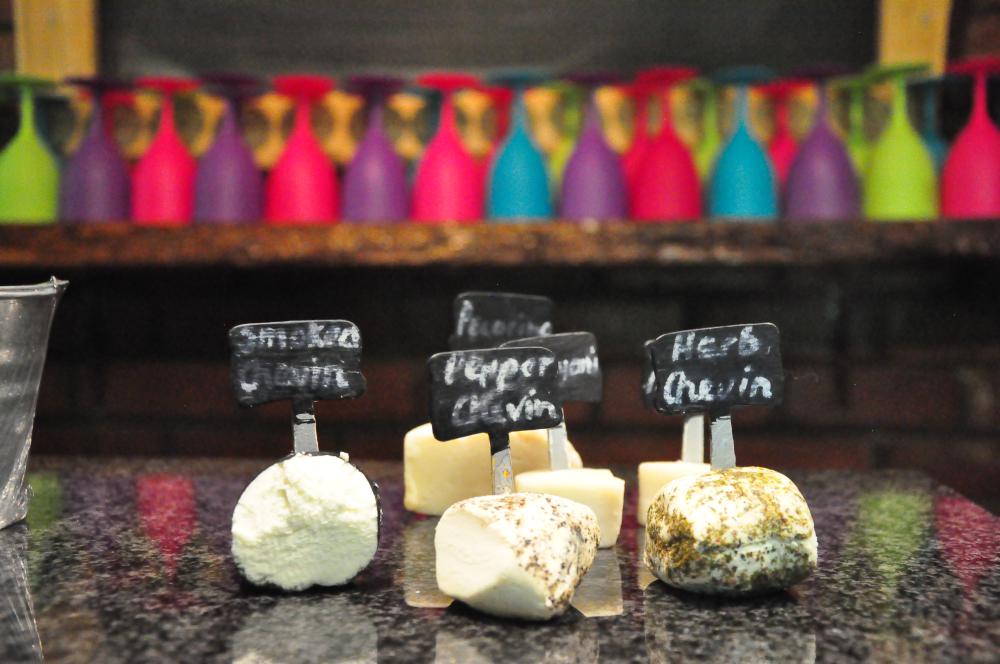 I don’t drink coffee, but my parents both swear by Terbodore Coffee’s Africa Blend. I never realised they were along the Midlands Meander until I walked in and recognised their packaging with Sultan (their Great Dane and mascot) on the front. It’s been rated as the best coffee in the region, and their Rooibos late was good too. They converted the old shed into a cafe and there are tables in the garden too. 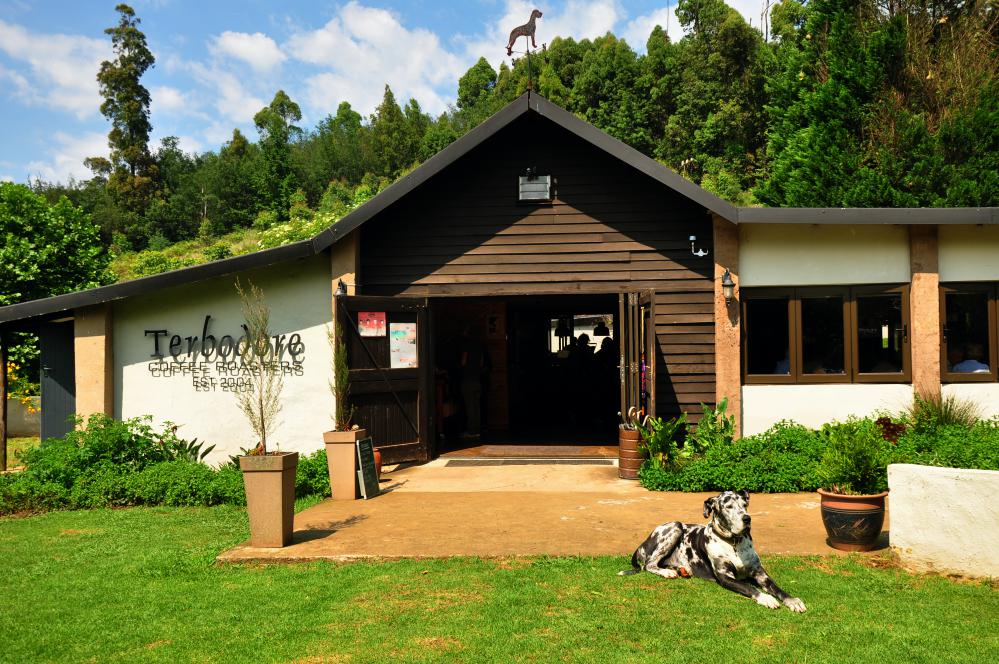 Where to stay along the Midlands Meander

Brahman Hills is located in the tranquil 1 000-hectare Blue Crane Nature Reserve, where Brahman cattle and wildlife roam free. Each morning I awoke to panoramic views from my window and zebras grazing near our wooden deck. We did an 11km walk followed by a champagne picnic at the top of the hill. Bring your mountain bikes and fishing rods too.

They offer 30 double hotel rooms, each with their own small private garden, near the restaurants, as well as rustic, self-catering cottages (where we stayed) within the reserve. Our three-bedroom cottage looked out onto a dam, had a lounge, dining area and large wooden deck with a Jacuzzi. They are fully-equipped and serviced every day, so you can really feel like you’re on holiday, even if you’re cooking for yourself.  This is an idyllic country escape for any time of the year, especially when you hear that each cottage has a fireplace. Guests can stay on a dinner, bed and breakfast rate, and can choose to cook for themselves of have a chef do so in their cottage. 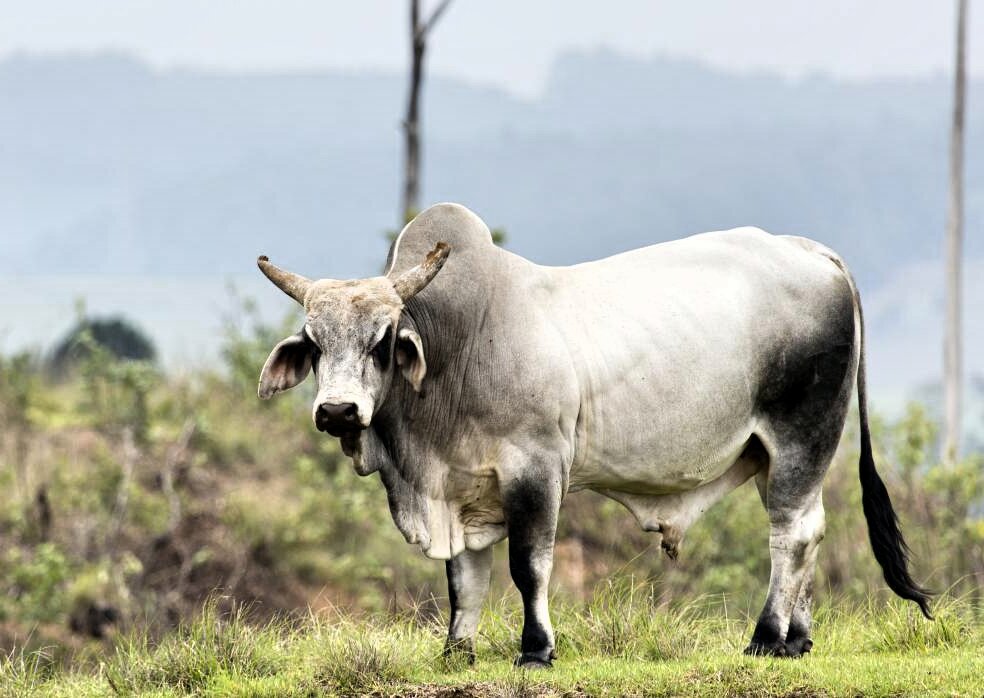 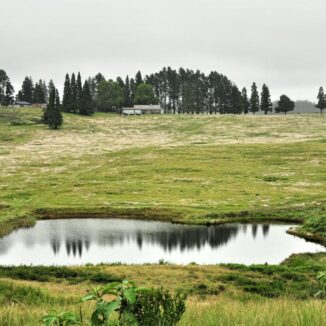 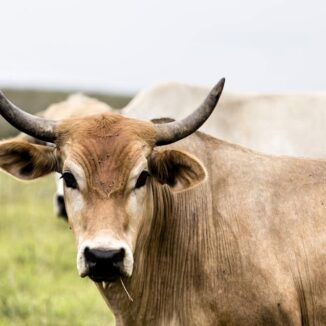 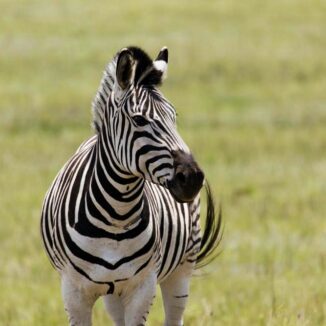 Where to eat and drink at Brahman Hills

You’ll seldom hear me wax lyrical about food, so at least you know that when I say the food at Brahman Hills was the best I’ve had in a long time you know I’m being genuine. I requested a menu low on sugar, carbs and starches. Executive chef Stacy White really outdid herself. Not only were all the dishes delicious, but they were Instagram worthy too, with edible flowers were sprinkled on top and the plates were decorated with colourful vinaigrettes. 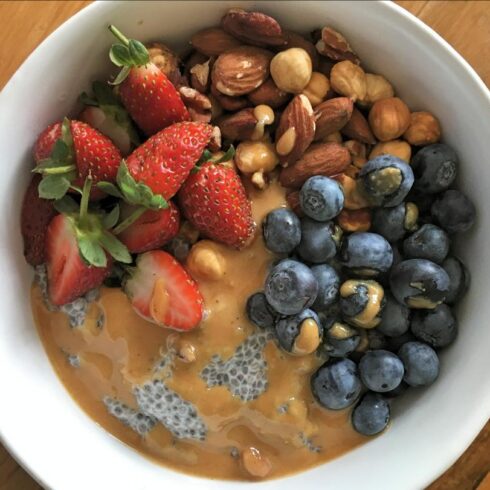 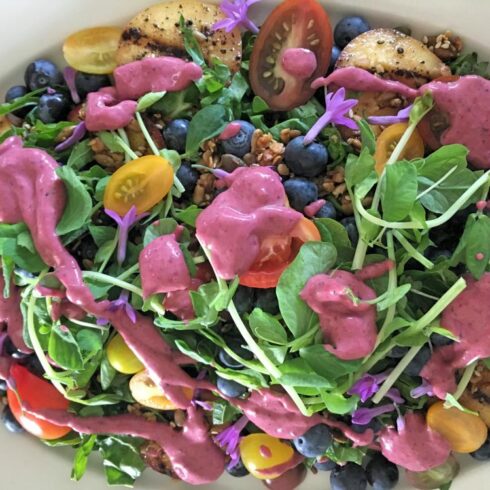 Grab a quick coffee on the go at Cappuccino. This relaxing space is flooded by warm sunlight and an inviting aroma. Plus it’s open all day long.

Open for breakfast, lunch and dinner, Brahman Cafe overlooks the rolling hills of the property. They also prepare private picnic baskets with bubbles, like the one we had after our 11km hike. 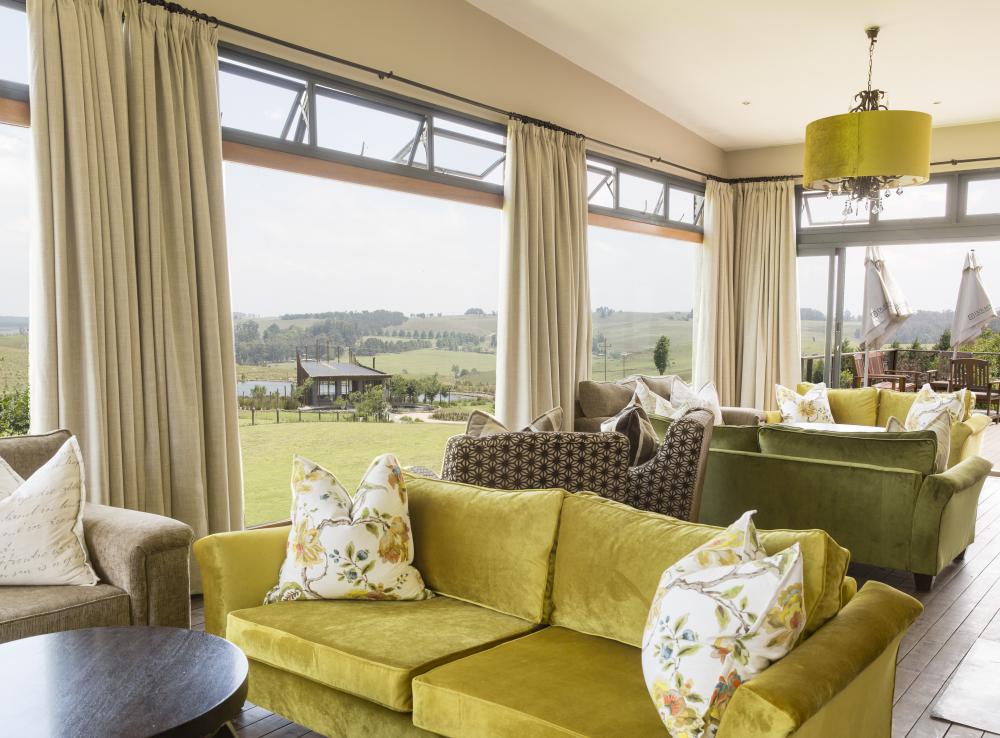 The underground bar, Copper, is decorated in rich coppery hues, which complement its exposed brickwork walls. Along with the regular drinks menu it offers a wide selection of  fine wines and whiskeys. 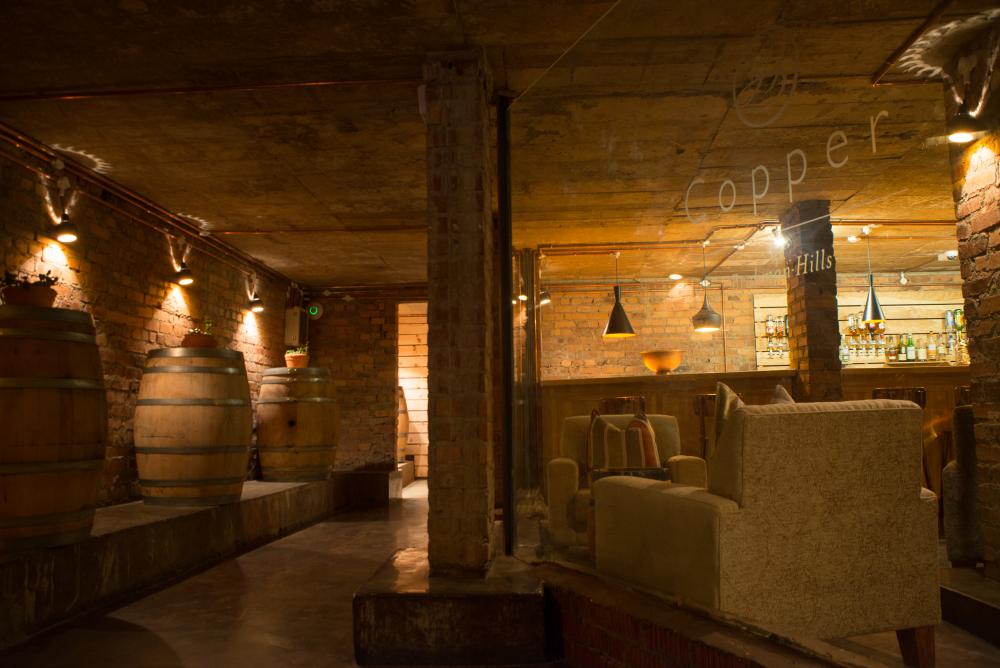 For a truly exceptional experience, we descended below the stairs to 89 on Copper, which neighbours Copper Bar. This sumptuously decorated dining room isn’t too big so it doesn’t get too crowded. Here we indulged in a three-course, wine-paired menu. 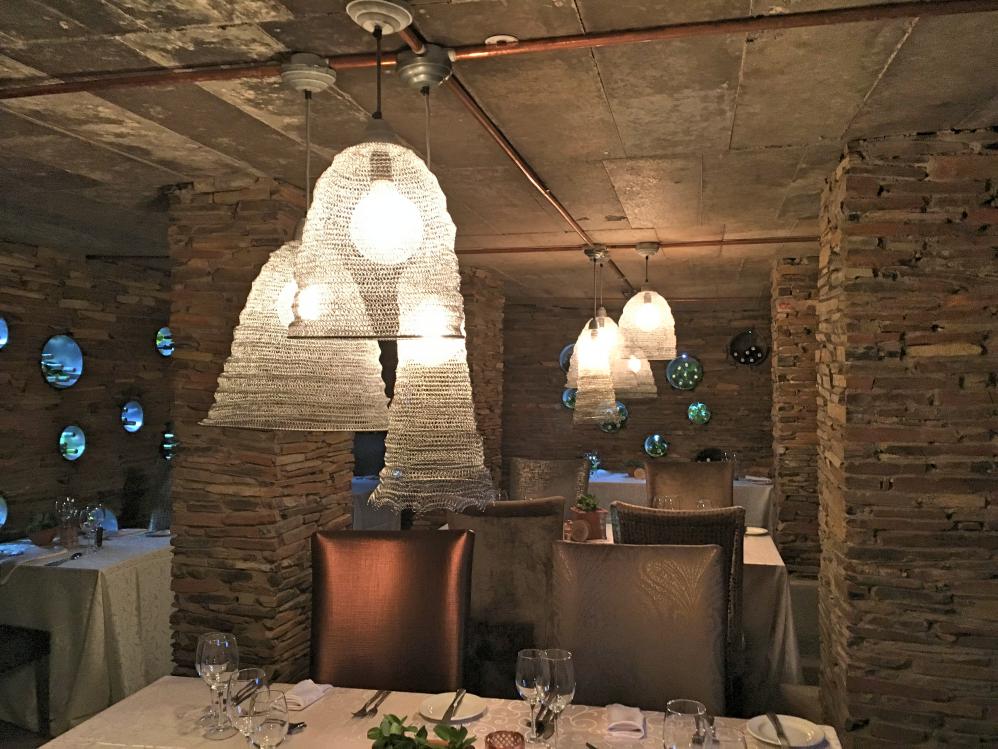 Blue Crane Nature Reserve also has a conference venue, close to the spa. Here we had freshly made juice as well as a selection of sweet and savoury, hot and cold breakfast options. The open floor-to-ceiling sliding doors let in the morning breeze and show off views of the surrounding luscious hills.

We decided to stay in one night and drink wine in the Jaccuzzi. For dinner we had Stacy as our very own private chef. As always she blew us away with her flavour and choice of healthy meal options. 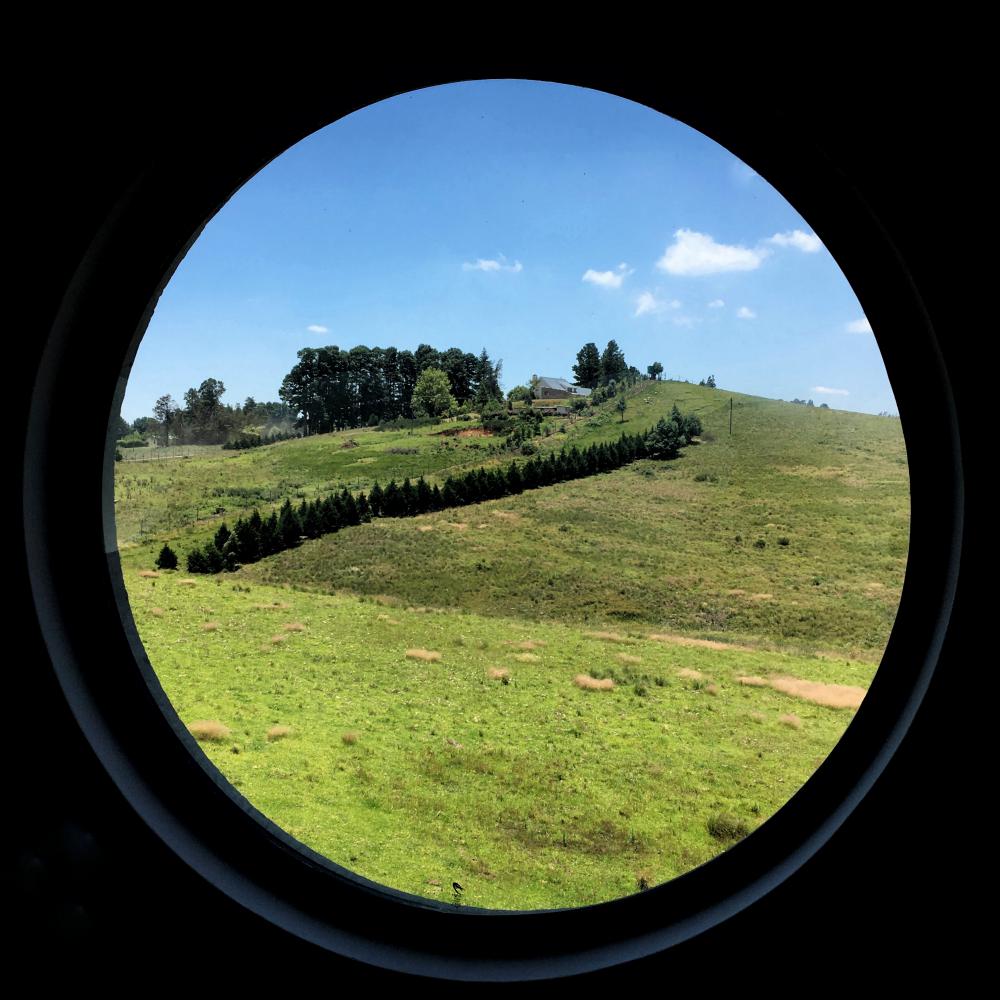 Can you say spa?

I’m not much of a spa kinda gal, as I prefer to save and spend my money on travel, although after an indulgent, half-day treatment at Brahman Hills’ Spa, I may have to change my mind. We were treated to a champagne gourmet lunch followed by a full-body exfoliation and a soak in a bathtub sprinkled with our bath salts of choice.  Then I relaxed during an hour-long, full-body massage and chose to have a pedicure in the colour of Smarties. The spa also organises treatments for bridal parties.

Have you driven through the Midlands Meander? What was your highlight?

This post was written in partnership with Brahman Hills and AccommoDirect, which lists a number of hotels, self-catering apartments and B&B along the Midlands Meander, in South Africa and around the continent. I maintain full editorial control of all content published on this website, but you already know that! ;)