Croatia: Land of a Thousand Islands

Many Croats will tell you that it was in 14th century Croatia that poet Dante was inspired to pen Inferno and after a visit you’ll understand why: the pride of the people for their culture, the sloth that overcomes you on the beaches of its coastline, the way you’ll overindulge in freshly caught seafood and homemade grappa, and of course the lust, that yearning to return.

In Croatia it puts you in good stead to be in the company of a skipper, and if you’re not then it shouldn’t be too difficult to befriend or hire one. Around 1,185 islands and islets are dotted along the 5,800-kilometre-long coastline, making it the new Riviera and a playground for holidaymakers, especially those who appreciate sun, sand and sail.

Sailing allows you the freedom to take on the Adriatic Sea, in a vessel of your means, and offers you the opportunity to tailor-make your trip. You choose the pace and duration, which cities and islands to visit and for how long, and where to anchor for the night.

At a length of 10.7 metres, a mast of 3.6 metres and six berths, you wouldn’t necessarily call Paulina small, although other sailing yachts outdo her in size. We chose to sleep aboard the fully-furnished yacht – that’s why we had hired her in the first place – but those who prefer terra firma can sleep on the islands. With Wi-Fi, an iPod dock, power point, fridge, stove and hot water, most easily mange a week or two onboard. But first we explored our departure point of Pula. 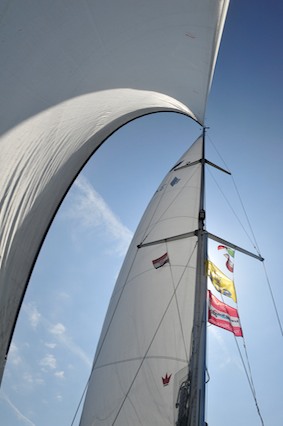 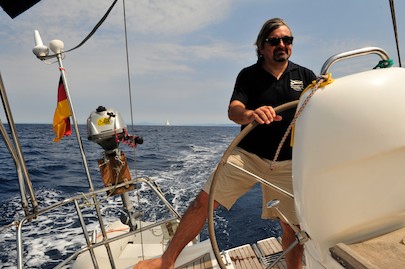 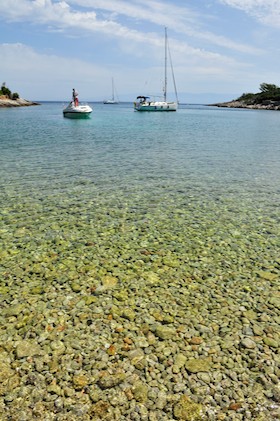 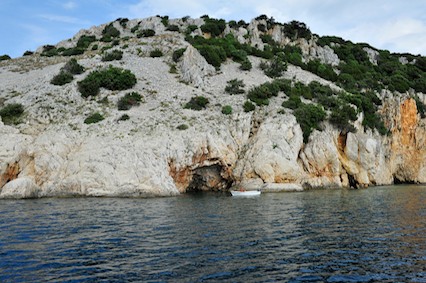 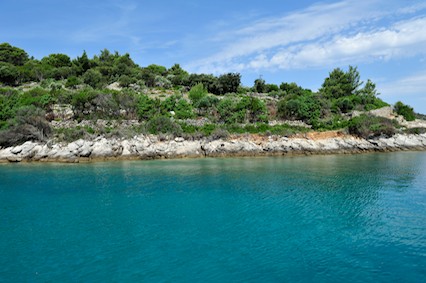 Three-thousand-year-old Pula is best known for its Roman Amphitheatre, which is one of the six largest in the world and was constructed in 1AD – even before Rome’s Colosseum. Once the site of gladiator fights, today it’s an open-air stage for concerts, and film festivals that can accommodate 5,000 people. Although it’s located outside the old city walls and can be explored by the hop-on hop-off bus, we wandered around the historic centre and between the main attractions, which are all within walking distance.

Enter the old city through the Golden Gate – also known as the Triumphal Arch of the Sergi family, who were prominent at the time of its building – and amble along the cobbled alleyways of gelaterias, twirling postcard stands and mementos. The town square, onto which the Temple of Augustus casts its shadow, is the ideal place to delight in the country’s coffee culture or fresh oysters and mussels, which are still cultivated old-school style. Otherwise, buy fresh produce from the farmers’ market two blocks away.

The 17th century star-shaped castle atop central hill overlooks the port and is well worth a visit, especially since it’s been converted into a historical museum of Istria province. From here we looked out onto the waters we would navigate for the next week. 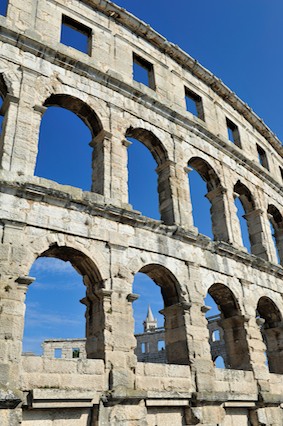 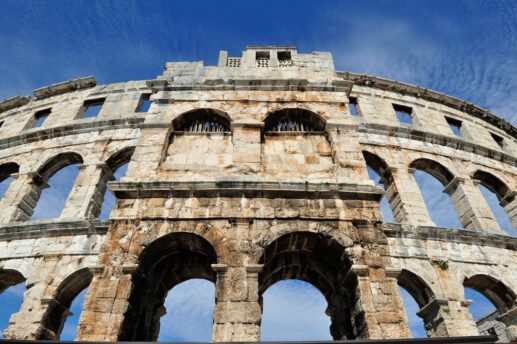 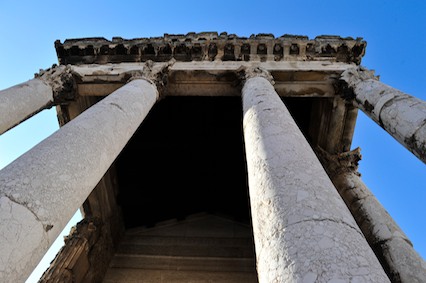 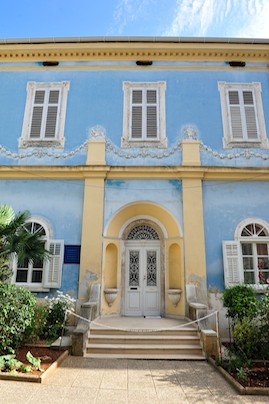 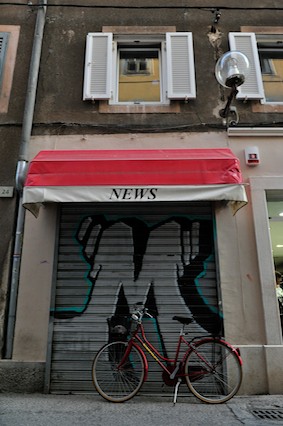 The favourable wind speed and direction, and the expertise of our Italian friend and skipper, Daniele Franceschetti, meant that we sailed 21 miles in three and a half hours after leaving Veruda Marina in Pula. We anchored in one of the many bays off Unije Island, just in time to watch the sun melt into the sea. Night brought with it silence and a firework display courtesy of the heavens.

Church bells awoke us as Unije wiped sleep from her eyes and stretched; a few late risers tiptoed in through the closed church doors. There were no signs of cars, only roads that had been carved into the rock of the island. Binoculars revealed couples sitting at al fresco cafes looking out onto the gently rocking boats.

After breakfast we were given a sailing 101 and taught the art of knot tying – the Alpine Butterfly Loop, the Bowline, the Figure 8 Knot – and then Daniele threw himself overboard so we could practice what we’d learnt in the eventually of man overboard. I forwent showering for snorkelling in the azure waters that necklace the island and sighted a seabed covered in black sea cucumbers and a variety of shy fish. 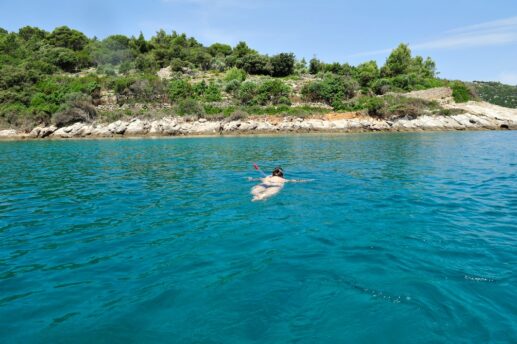 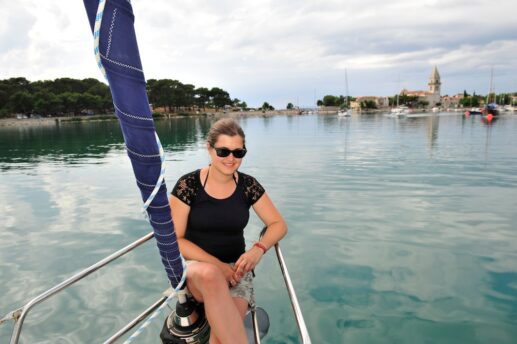 Over the following days we explored many islands and bays. The radiant seaside town of Mali Losinj on Losinj Island is the biggest island town in the Adriatic Sea. I walked along the promenade and sat on a bench, next to a greying man, to eat a pastry I had bought from a street side vendor. I looked across the waters of the c-shaped bay onto the other side of the island. The man – Luka, I later learnt – threw his crumbs to the gulls and fish. “Mali Losinj was at its peak in the 17th century. It had the largest merchant marine in the Adriatic, greater than Rijeka, Trieste and even Venice,” explained Luka, his pursed lips could barely contain his pride.

Today, the island is famed among international tourists for its brightly painted buildings, seafood restaurants with views of the port, beaches and walking trails in Cikat Forest. I walked away from the city centre, up stairways with front doors that open directly onto the stairs, to the Nativity of the Virgin Mary Church that guards the city of 7,000 residents from above. It’s also a lookout point, like a ship’s crow’s nest.

Back in the city centre, an aproned restaurateur flicked her cloth at a man who scurried away with smiling eyes. Two seated onlookers heartily laughed and winked at me with knowingness that even though he’d forgotten his wallet today, he’d still pay the bill at some point. I sat at the neighbouring table and ordered grappa as laundry, in the colours of Himalayan prayer flags, fluttered overhead. It was here that I leant of Croatian hospitality. “Everyone knows everyone, we are all family here,” said the younger of the two men. 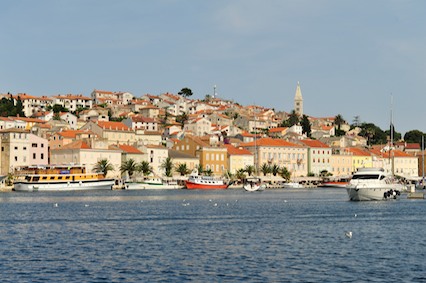 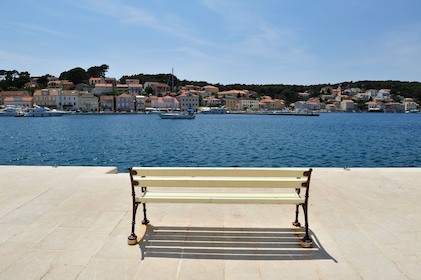 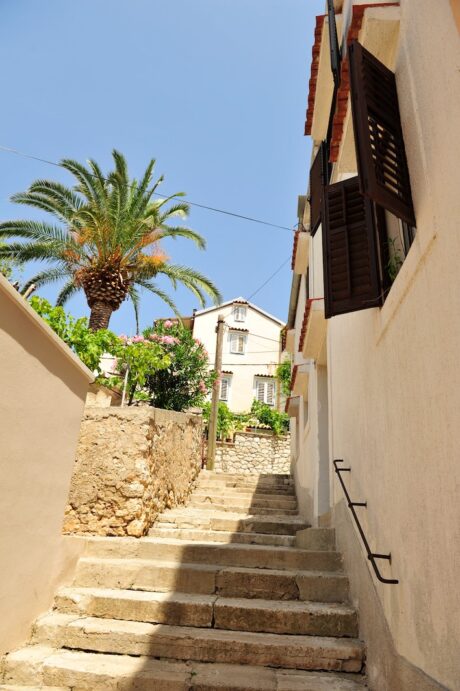 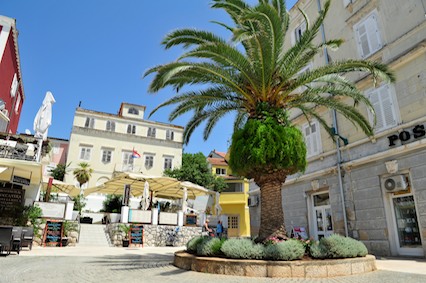 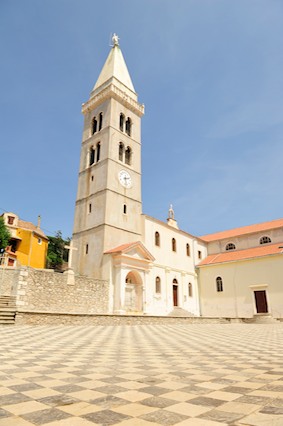 I was sitting on the yacht’s bow, with my hair dancing in the wind, as we neared Olib. As with many of the islands that float along the Croatian coastline, one can leisurely walk from one end of Olib to the other. It’s a pastoral island with no more than 100 houses. Unlike Mali Losinj, it doesn’t see too many tourists and that’s one of its greatest charms. While exploring the surrounds, I passed a red painted, cast iron gate with the date 1978 inscribed on it. Indeed, it seems that Olib tranquilly resides in a bygone time. Derelict houses have been abandoned, only to be inhabited by Mother Nature.

I counted the number of restaurants on a single hand. The wall of one rectangular, wooden restaurant opens like an awning window to offer views of the shallow waters less than 20 metres away. Bread is served for starters alongside olive oil and olives from the plantations we meandered between en route to the beach on the eastern shore. Similarly, vegetable patches grow along footpaths to front doors and houses are encircled with walls of one limestone rock balanced atop another. The painted, wooden window shutters make the houses seem to be a manifestation from a children’s storybook.

While I may have already forgotten how to tie the Alpine Butterfly Loop, I’ve been taken with the lust to return and will surely perfect it on my next island hopping visit. 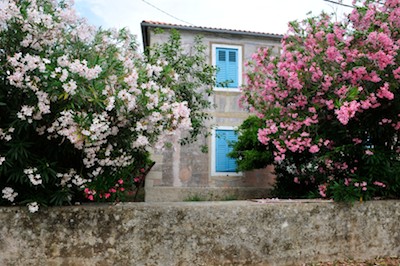 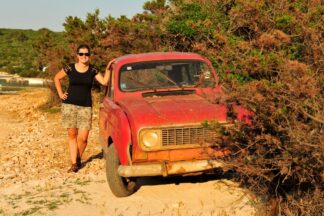 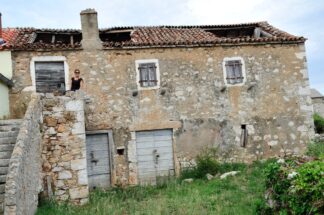 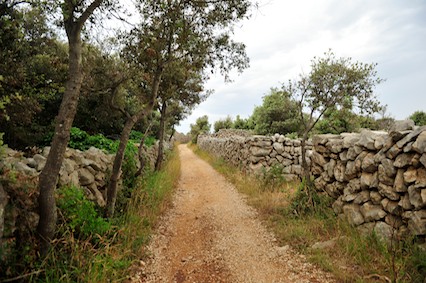 Have you ever been island hopping? I’d love to hear about it in the comments below.