How to celebrate Polish Easter (plus my favourite Easter cake recipe)

How do Poles celebrate Easter? With a number of beautiful religious traditions that also involve heaps of mouth-watering food being shoveled on your plate by well-meaning family members, who really only want to show their love by slaving away in the kitchen for days and then feeding you, sometimes against your will, while pinching your cheek and asking when you’ll be married. Well, the latter part usually applies when you’re a woman (especially, one over the age of 30). Then, they’ll moan a little about the leftovers and how food shouldn’t be wasted (and rightfully so, we’ve had a hard history, but that aside just don’t do it) and so I am compelled to grab another plateful. And all this before dessert is served.

But in all seriousness. I was in Poland just two weeks ago, and it was wonderful to see all the preparations for Polish Easter coming together. Especially since Poland is largely a deeply religious country, with about 87% of the population being Roman Catholic. We try to celebrate Holy Week and Polish Easter (Wielkanoc) in South Africa, much like the Poles in Poland do.

I’m sure I’m biased, but Poles take Easter egg decorating to a whole new level. As a child, during Holy Week, my mother would hard boil chicken eggs in red onion skins or beetroots, so as to dye them a maroon colour. Then we’d reach for the paintbrush. The motifs vary from geometric shapes and patterns (which are the most common) to paintings of animals or flowers. These days the eggs are also covered in candle wax to create a batik-like effect, others are etched using a sewing needle or decorated with sheets of stickers. Some artists paint wooden eggs, which are then reused over the years.

Palm Sunday, which signals the start of Holy Week, is known for taking palm fronds to church to be blessed and then placed in the home to bring prosperity to all its inhabitants and visitors. Though as you know, the central European nation doesn’t count Raffia Palms among its indigenous plants and so the branches of willow trees and grasses were used instead. Over centuries they have became more ornate and these days they’re colourful, bouquet-like batons of dried out flowers, grasses and plants that have been dyed and tied with ribbon. The hand-held ones are around half a metre in length, while those that stand independently in town squares and church courtyards can be a few metres in height. Decorating styles vary from region to region.

You can easily buy an Easter palm from the local market, florist or even supermarket. I spied these at a local green grocer in my home town of Bielsko-Biała for 1zł (R3 or around $0.20). 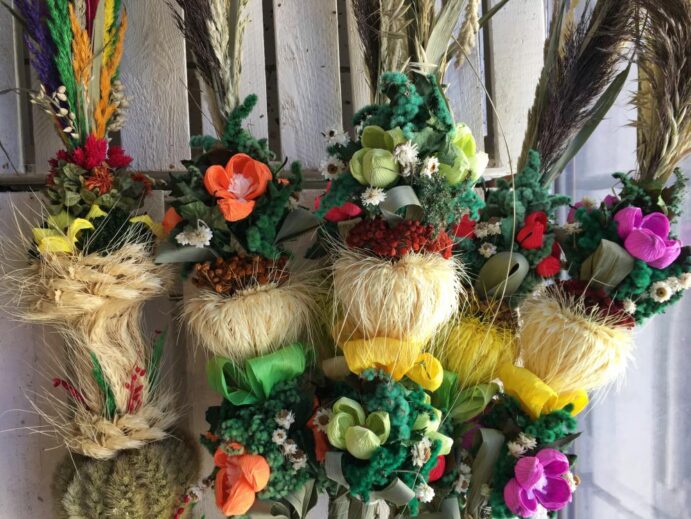 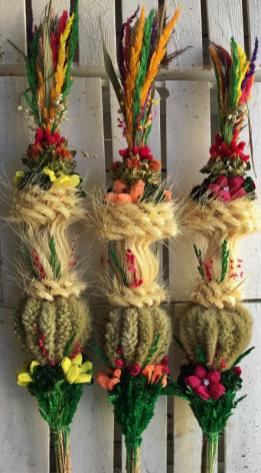 This is by far my favourite part of Polish Easter traditions, well, this and the part where we get to douse each other with water (more about that in the next point).

Święconki baskets are covered in white lace and filled with food symbolic of our various beliefs: rye bread symbolises the body of Christ; the pisanki represent resurrection and new life; salt (used as a natural food preservative), well you can image what that stands for; horse radish represents the bitterness of Jesus’ death; as well as the Easter Lamb, which is a symbol of Jesus. If you bring along a small empty container, you may also have it filled with holy water.

Swięconki (plural of święconka) are usually wrapped in flowers, especially as Spring always coincides with Easter in Poland and the northern hemisphere. They are blessed with holy water at Easter Saturday mass and eaten at breakfast on Easter Sunday. Below is ours. 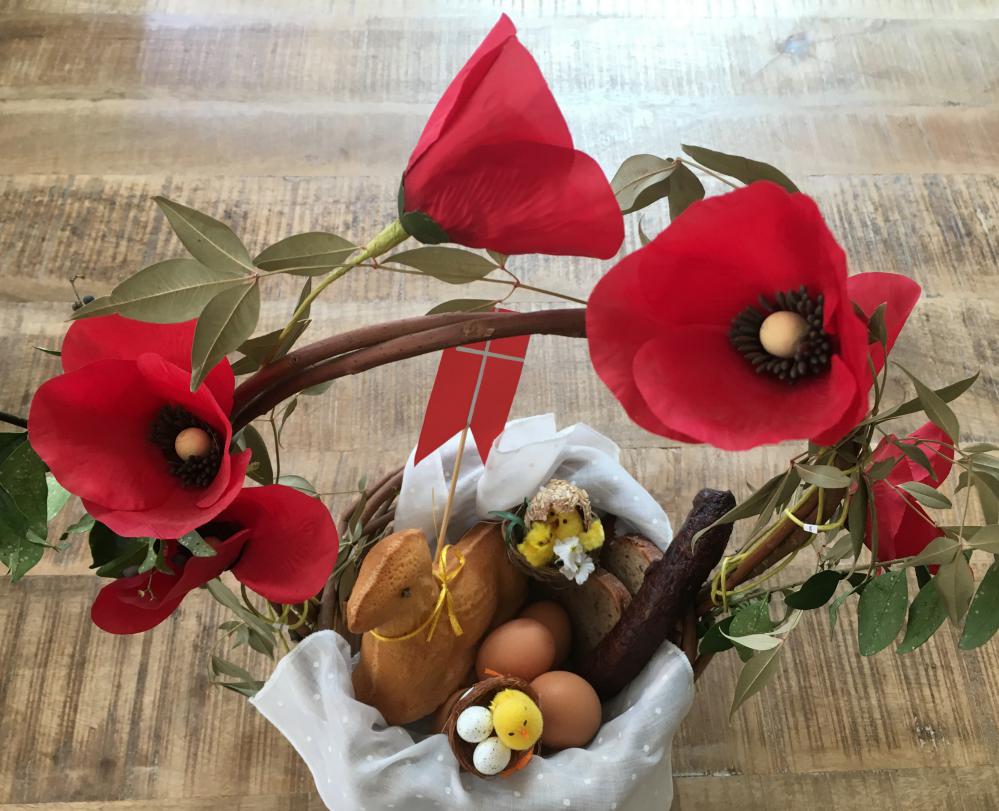 Placed in the centre of a Polish Easter table setting, you’ll probably find a lamb of some sort, whether it’s made from babka (a kind of yeast cake), bread, butter or flowers, anything really. The lamb symbolises Jesus and his sacrifice, and is usually accompanied by a red banner with a white cross. Below is the lamb from our święconka.

On the morning of Easter Sunday, after mass, the feasting begins after 40 days of fasting during Lent. The table is laden in cold meats, sausages, salads, rye bred, hard-boiled eggs (the pisanki) drenched in mayonnaise and spring onion, and surrounded by family members and friends. And there are usually no fewer than three cakes for dessert. 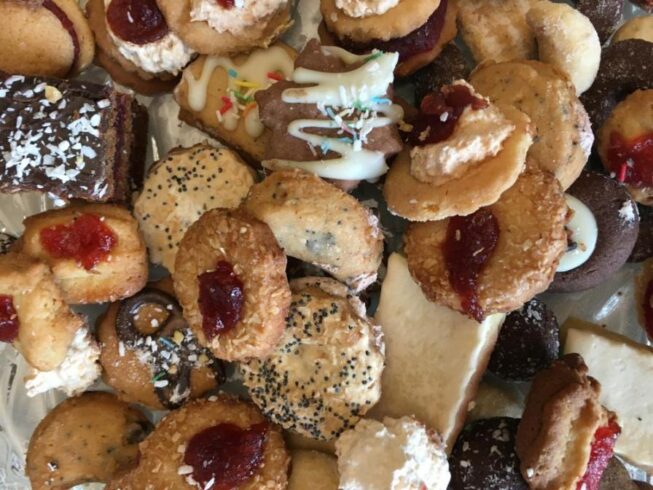 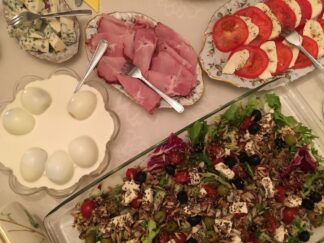 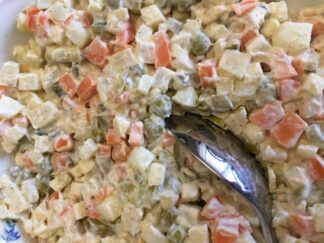 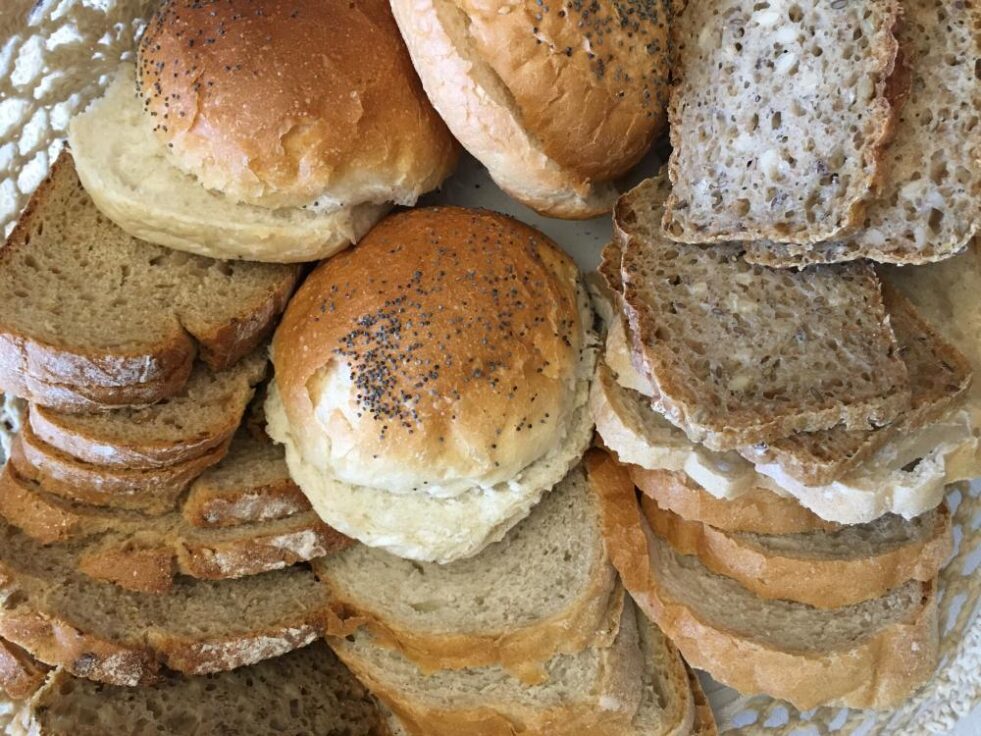 Here’s a recipe for Mazurek Wielkanocny cake, by Ania from In Ania’s Kitchen, which is traditionally eaten at Easter time around Poland.

On Easter Monday we pour water on each other. While not environmentally-responsible (as some will point out), Śmigus-Dyngus, or lany poniedziałek, which means “Wet Monday” in Polish, involves pouring water over each other, using a spray water gun, a cup or bucket. Back in the day, it involved boys spraying the girls and tickling their ankles and legs with blossoming branches. The girls had to pay the boys to stop and would get their revenge the following day. Some old wives tales mention that the more a girl is sprayed the higher her chances of getting married. Many believe that this tradition is symbolic of Christian rebirth and baptism, some claim it has pagan roots, either way it’s a good way to burn calories after all that over indulgence.