This year I was hoping to participate in the fifth Put Foot Rally, perhaps I’ll go next year. My cousin, Pawel Motylski, and his team, The Polar Bear Express, won ‘Best Crew 2014’ and they told me all about their adventures. As seen in the June issue of Juice Magazine.

The Polar Bear Express crew drove a 1984 Suzuki half loaf across five Southern African countries – beginning in Cape Town and ending in Malawi – to put shoes on children’s feet. They started the 8 000km Put Foot Rally with faulty brakes, survived on baked beans and chakalaka, shared a tent and had to extinguish four fires along the way, but returned with the title of best crew. 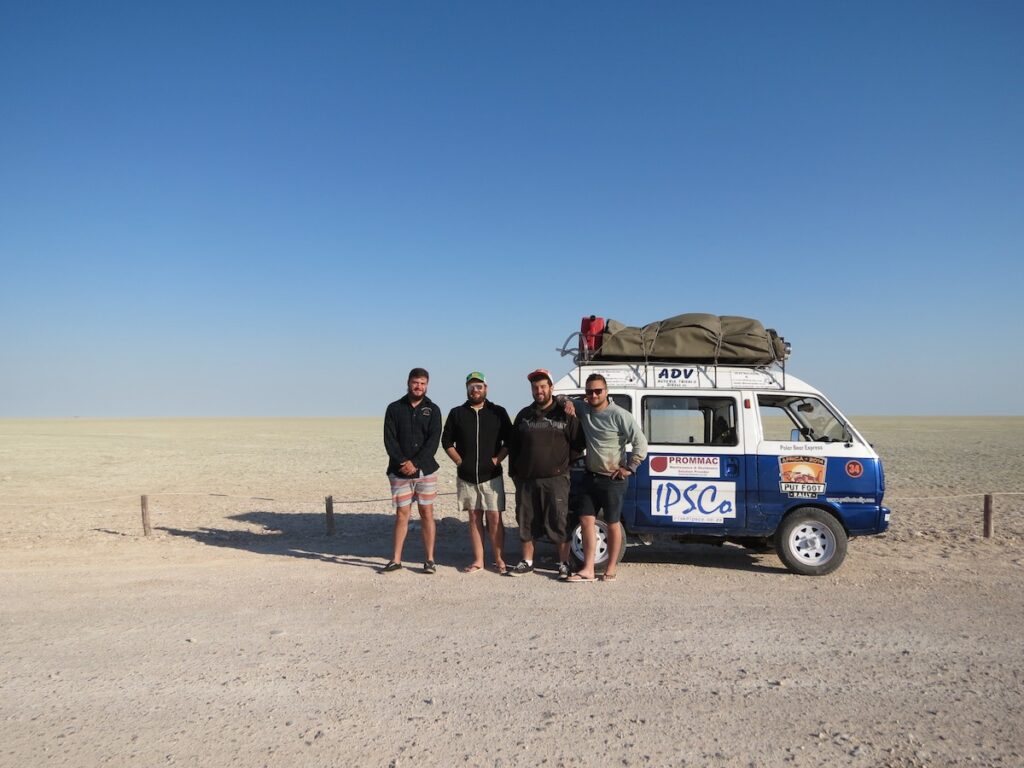 Daryn Hillhouse is the founder of the Put Foot Rally, which is in its fifth year. He based the expedition on the Mongol Rally. Similarly, it’s a test of endurance for both driver and car, where camaraderie comes standard with a mixture of sweat and engine oil, topped off with a well-tempered adventurous spirit. Crews navigate through South Africa, Namibia, Zambia, Zimbabwe and Malawi. The dodge pot holes and wildlife, donate school shoes along the way then jul the evenings away. Crews sign up knowing that anything could go wrong – it’s not for sissies as there’s no support team. 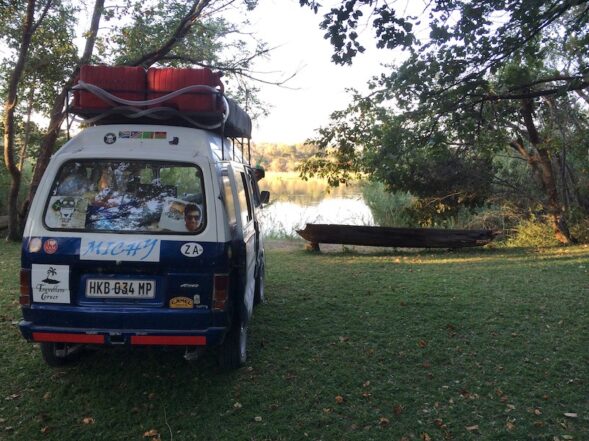 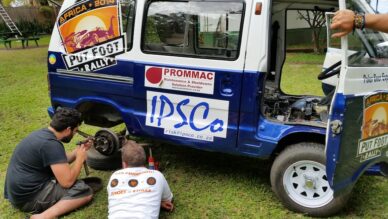 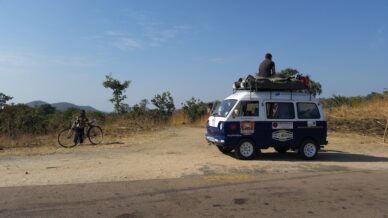 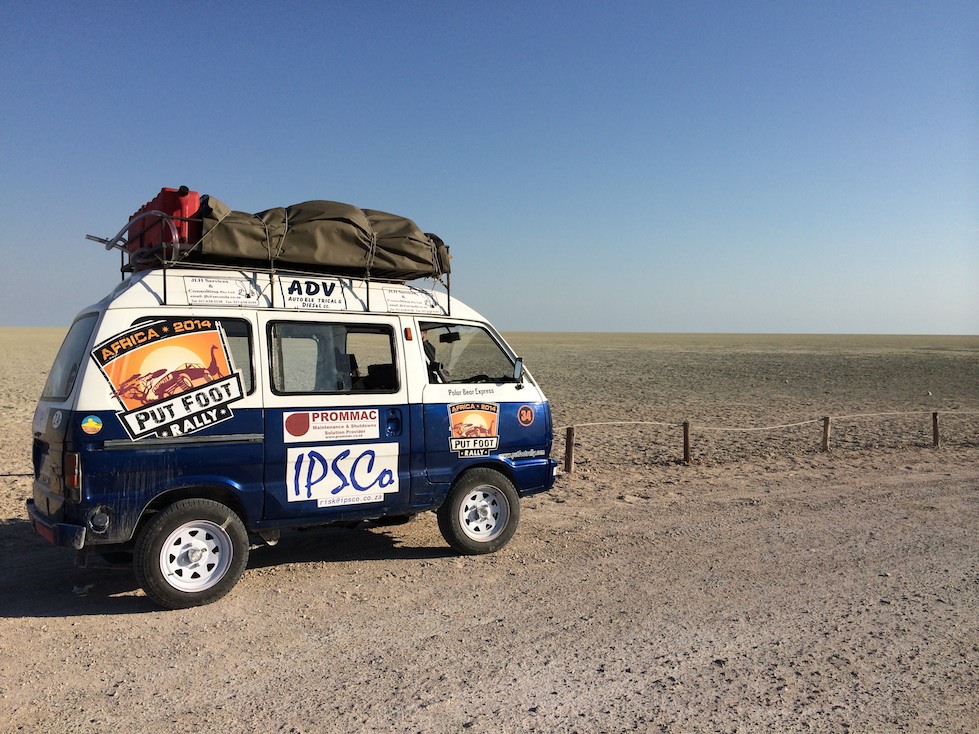 This year’s rally is the biggest yet as 65 crews, of up to four people each, follow in the tyre tracks of the Polar Bear Express crew, namely Pawel Motylski, Reuben Walter, Daniel Laia and Gareth Williams from Mpumalanga. Last year the crew entered the vintage car category. They found a 1984 Suzuki half loaf listed for R30 000, the owner agreed to R25 000, but in the end they bought it for R20 000 after they took it for a test drive. With money from sponsors, they installed a new gearbox, a Nissan 1500 engine, pop doors and the rear seats of a Land Rover Defender, which brought their pre-departure spend to R60 000. “We get to the starting point in Cape Town on day one, we have no brakes and our back wheel comes off! A couple of days later the accelerator cable snapped and at some point the starter motor packed up. We finished the entire trip, 10 000-odd kilometres later (from Mpumalanga and back again), with a car in a better condition than when we started,” says Reuben. “When we drove in Cape Town, the guys in the back had their doors open and when we had to brake they ran out the car and stopped it from the front,” adds his close friend, Pawel.

They named the car Michy in honour of Daniel’s late cousin. “I honestly think God was looking after us because there were some parts in Zambia and Zimbabwe where I thought, ‘This is the end.’ I was praying, ‘Please God just get me home.’ The road was the worst I’d ever seen in my life. There were potholes, it was narrow, there were cows, sheep, baboons, and buses flying by at 120km/h around a corner. On a mountain pass. With no lights,” says Pawel.

Even though the half loaf was older than any of the Polar Bear Express crew members, it certainly wasn’t the oldest car to complete the journey. That title goes to the 1935 Bentley, whose private support crew was following in a Chevrolet bakkie, but had to head home after their axel snapped.

For Pawel a highlight was the people they met along the way. “During the trip we noticed that there are still good people out there. When we stopped in Vereeniging a lady asked, ‘What are you doing?’ We said, ‘We’re doing a charity rally’ and she sponsored our breakfast at her restaurant. In Colesberg the mechanic opened his shop just for us, even though it was a public holiday,” he shares. But the crews do their fair share of good too. Besides the crew participation fee – $1 600 this year – each crew has to raise $400, which goes to the Thula Thula Rhino Orphanage and the Put Foot Foundation to buy school shoes for children. The shoes are delivered at the designated drop-off points along the route. “School shoes have an enormous impact on young children. Often we hear of children who avoid going to school because they’re embarrassed that they don’t have shoes. There are hundreds of thousands of children who walk barefoot, sometimes up to 10km a day, to school and back. Shoes give a child hope, pride and dignity,” says Daryn. Once crews fit the children with shoes, it’s time for a soccer game, dancing and singing. 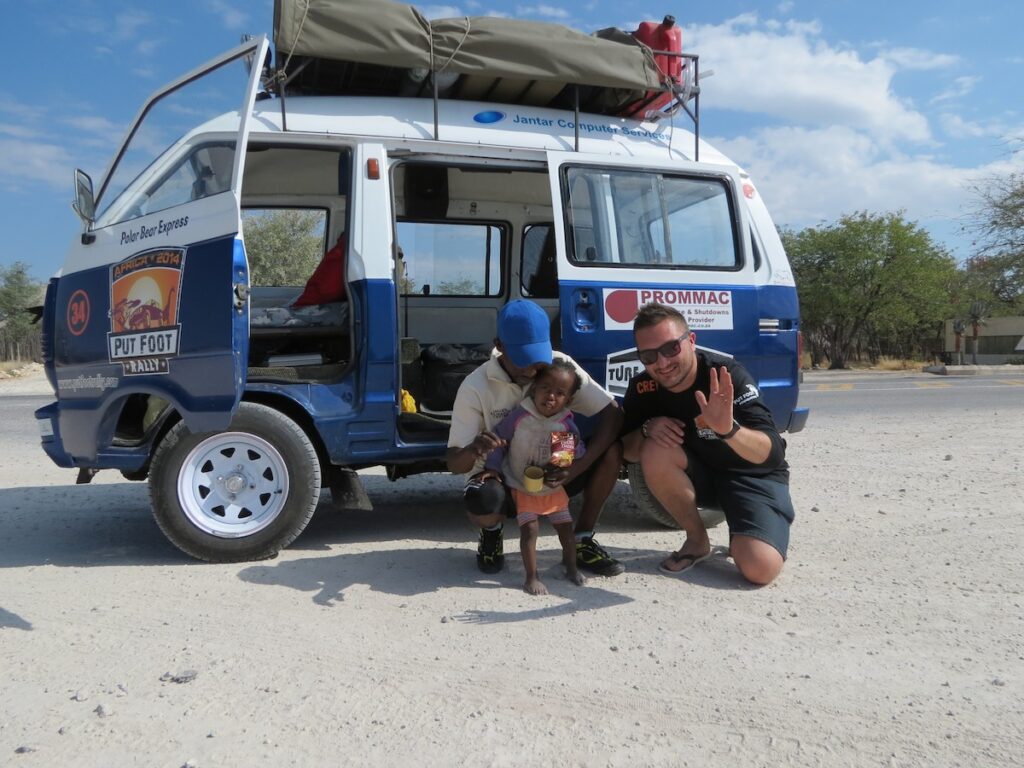 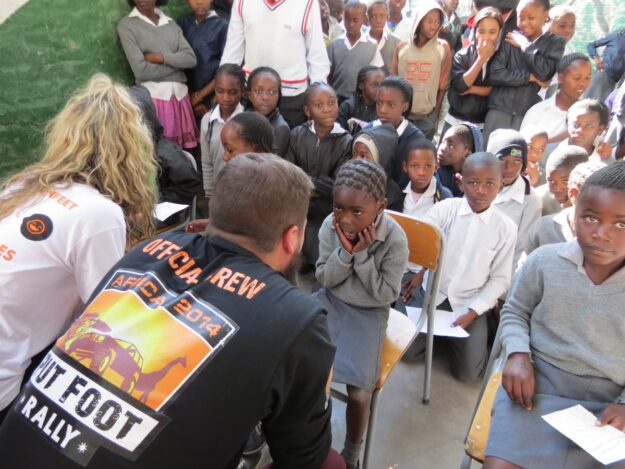 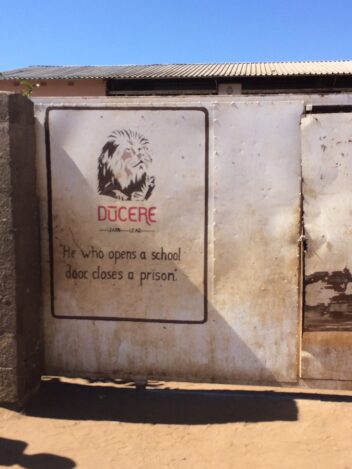 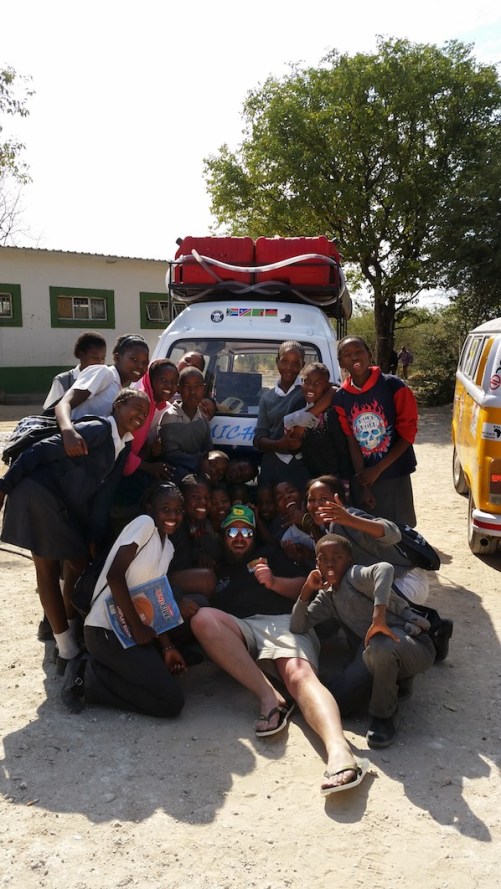 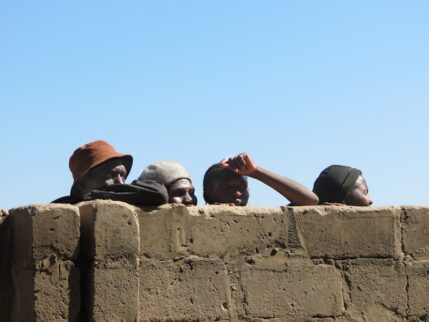 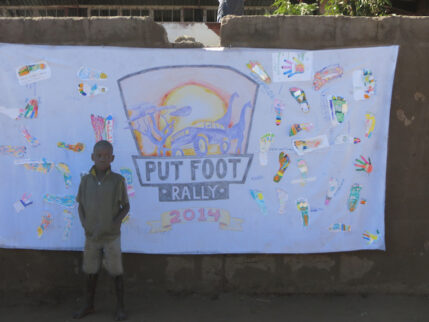 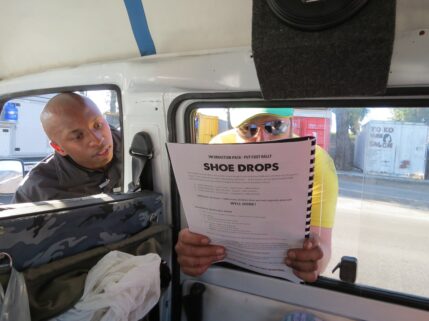 Daryn urges participants to embark with an open mind and to leave preconceived ideas about Africa at the Namibian border. The Polar Bear Express crew did just that: “It’s a lot easier to travel in Africa than you were made to believe, no 4x4s are required,” says Reuben. Pawel adds: “People say Africa is so far behind, it’s not! There are ATMs everywhere and shops like Spar and Checkers. When we left we thought we’d struggle to find food and have to ration, but there weren’t any problems at any of the places we visited. We were paying with our cards, withdrawing money, there was wi-fi, everything.” Their biggest surprise was Zimbabwe as they couldn’t find any signs to support its bad reputation. They recount the story about how they were stopped in a road block at 2am and fined $25 for a faulty registration plate light, and the policeman still asked for a pair of shoes. This year’s rally however will bypass Zimbabwe to finish off along the golden beaches of Mozambique.

Pawel’s best advice is this: “Bring more money than you expect you’ll need because you don’t know what will happen. Prepare, but don’t over pack. Donating shoes is a great idea, but take notebooks and pens as there are many kids sharing one book and pen, and bring soccer balls.” And Reuben reminds crews to: “Take a portable fridge to keep the beers cold and the cheese fresh. Use a vehicle that’s easily mendable and most importantly have a crew member who knows how to fix a broken anything.” After four years of doing the rally, Daryn thinks about some creature comforts: “Take hand moisturising cream, wet wipes and nail clippers. These are three critical things you’ll never appreciate until you’ve been on the road for 18 days.”

The bike category has been re-introduced this year and one crew, a family, is taking an old Bedford Army truck. While there’s no prize for the first team that reaches the final checkpoint – it’s about the experience and not a race – I was curious as to what it takes to be voted the best crew by fellow participants. “We won because we were at all the parties and reached all the checkpoints. We did the rally in the original category and we were legends – eating beans old-school style. I think we also won because we interacted with the other crews and always helped if the organisesrs wanted any help,” says Pawel. So, would they do it again? Reuben doesn’t hesitate: “In a heartbeat, without a doubt it was one of the best experiences of my life.” And whatever happened to Michy? She is up for sale in Secunda, awaiting her next adventure.