My two dear friends, Christina and Matthias, hosted me in Vienna for  just over a week. So often capital citifies and popular travel destinations become synonymous with photographs of their must-see landmarks. In this post I hope to present Vienna’s from a different perspective, not merely through those well-known establishing shots that grace the covers of guide books. 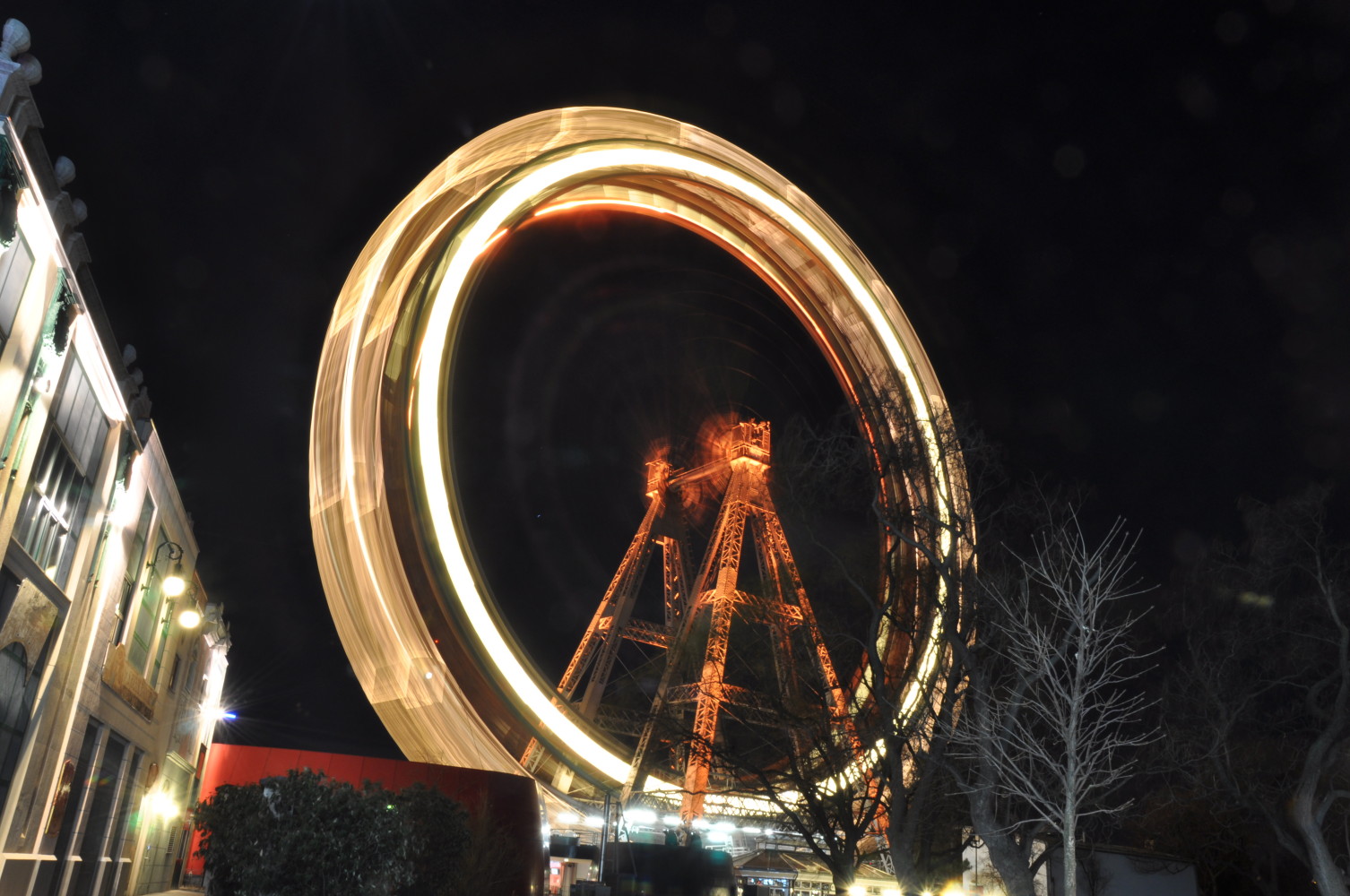 It may not be the biggest ferris wheel in the world, however the Riesenrad certainly receives the title of being one of the oldest continually functioning ferris wheels – not just in Austria, but in the world. Riesenrad was built in 1897 in celebration of Franz Joseph’s golden jubilee (he was Emperor of Austria from 1848 until 1916, if you recall). It is iconographic of nineteenth century Vienna and has become a prominent feature of the Viennese skyline. You may have seen it in the film, Before Sunrise; if you’re more of an action movie kind of person, rather than the romantic comedy  type, you may remember it in the 1987 James Bond movie: The Living Daylights. Riesenrad is located within Prater amusement park, which much like a public park is open 24 hours a day, seven days a week. Entrance is free (yes, you read right!) and you pay per ride, which range from €1.50-5. Riesenrad is found amidst cafes and restaurants, live performance venues and other crowd-pleasing attractions. The Prater amusement park is just as busy during the day as it is at night – rides start at 10am and end at 01am.

Many families, with fingers sticky from cotton candy, roam between the lanes, a new surprise awaits them from behind every corner. They are pleased that it was not destructed in 1916, as intended, due to a lack of funds. Over the centuries the Riesenrad has interesting stories to tell and has seen its fair share of breathe-taking stunts: a woman hung from one of the cabins by a rope in her mouth: she wanted to draw attention to her family’s financial situation and that of so many others. And a circus horsewoman made an entire revolution while on the back of a horse, which was atop one of the cabins. Sadly, the ferris wheel burnt down in 1944, however since then has been rebuilt and modernised. 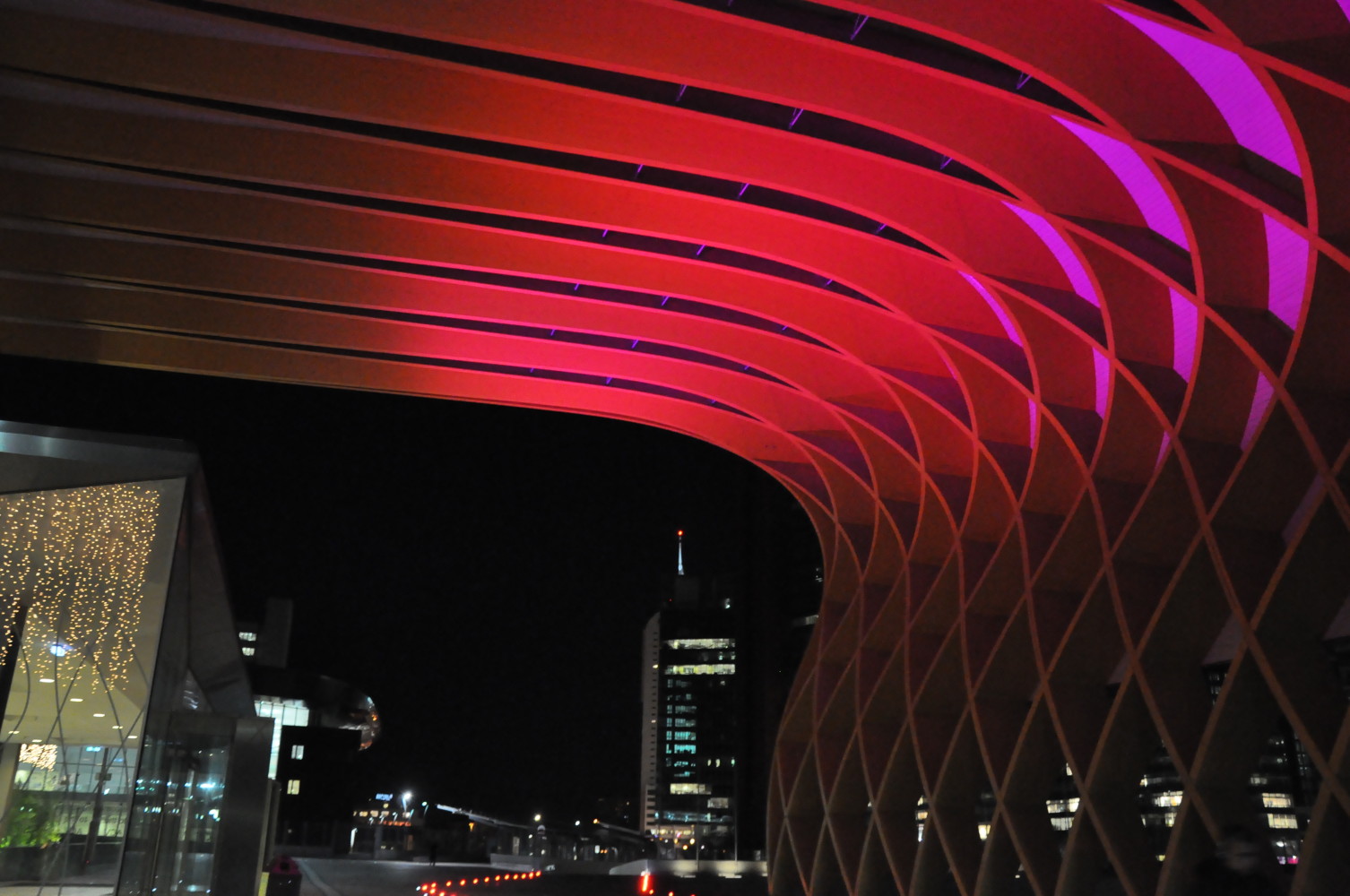 Situated on the banks of the Blue Danube, the Vienna International Centre boasts a contemporary setting and plays host to the Austrian United Nations headquarters. Tourists can take a number of daily guided tours around the facilities, which provides insight into the inner workings of the United Nations though various exhibitions about upcoming projects and campaigns. The Human Rights tour and the Arts tour are particularly popular, and you can also attended lectures. UNO city, as it is commonly known, is home to commercial service centres as well as the headquarters of numerous local and international organisations. Because of its location, it offers superb views of the surrounding cosmopolitan. You can freely walk around  the outside of UNO city, as I did when I snapped this photograph. At night the surrounding buildings are brightly illuminated and the colours change every few seconds. UNO City is that it is classified as an ‘extraterrestrial district’ and is exempt from local laws and jurisdictions. Do you agree that the architecture is reminiscent of Bladerunner or some other futuristic Sci-Fi flick? 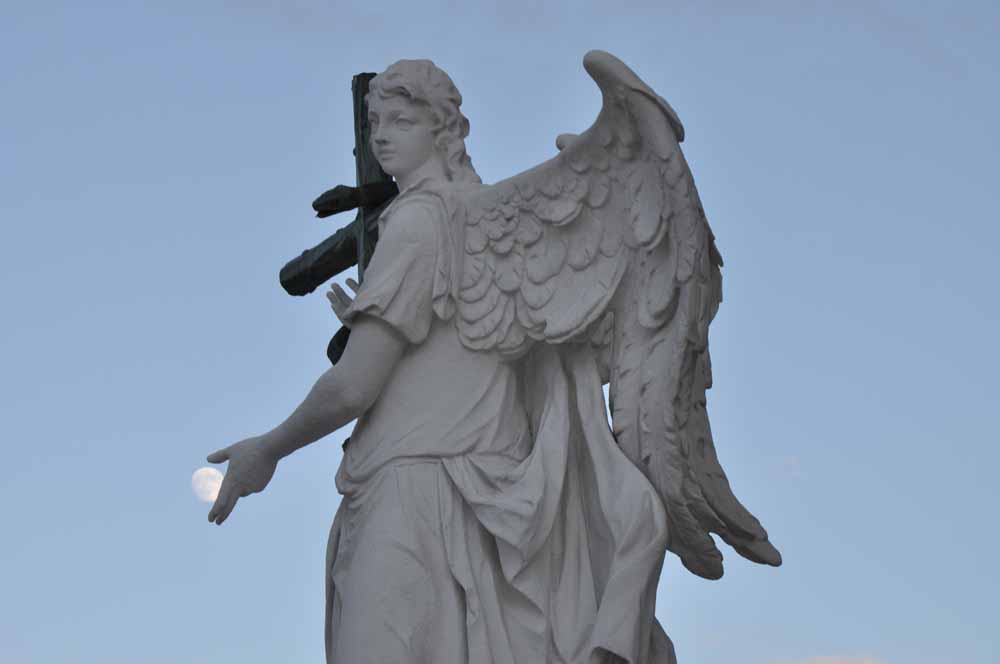 Vienna’s greatest baroque church is flanked by two angels at its entrance: one from the Old Testament and another from the New. When I arrived at dusk the angles were handing out ‘lunar pennies’. She allowed me to take this photograph just moments before I graciously accepted her penny. I still carry it with me!

It’s interesting to note that St Charles Church is the result of an architectural competition that was held by Charles VI – as the Holy Roman Emperor, he wanted a church for his namesake patron saint. After the winner, Johann Bernhard Fischer von Erlach, died his son, Joseph Emanuel, completed it, but not before making a few changes to his father’s plans. 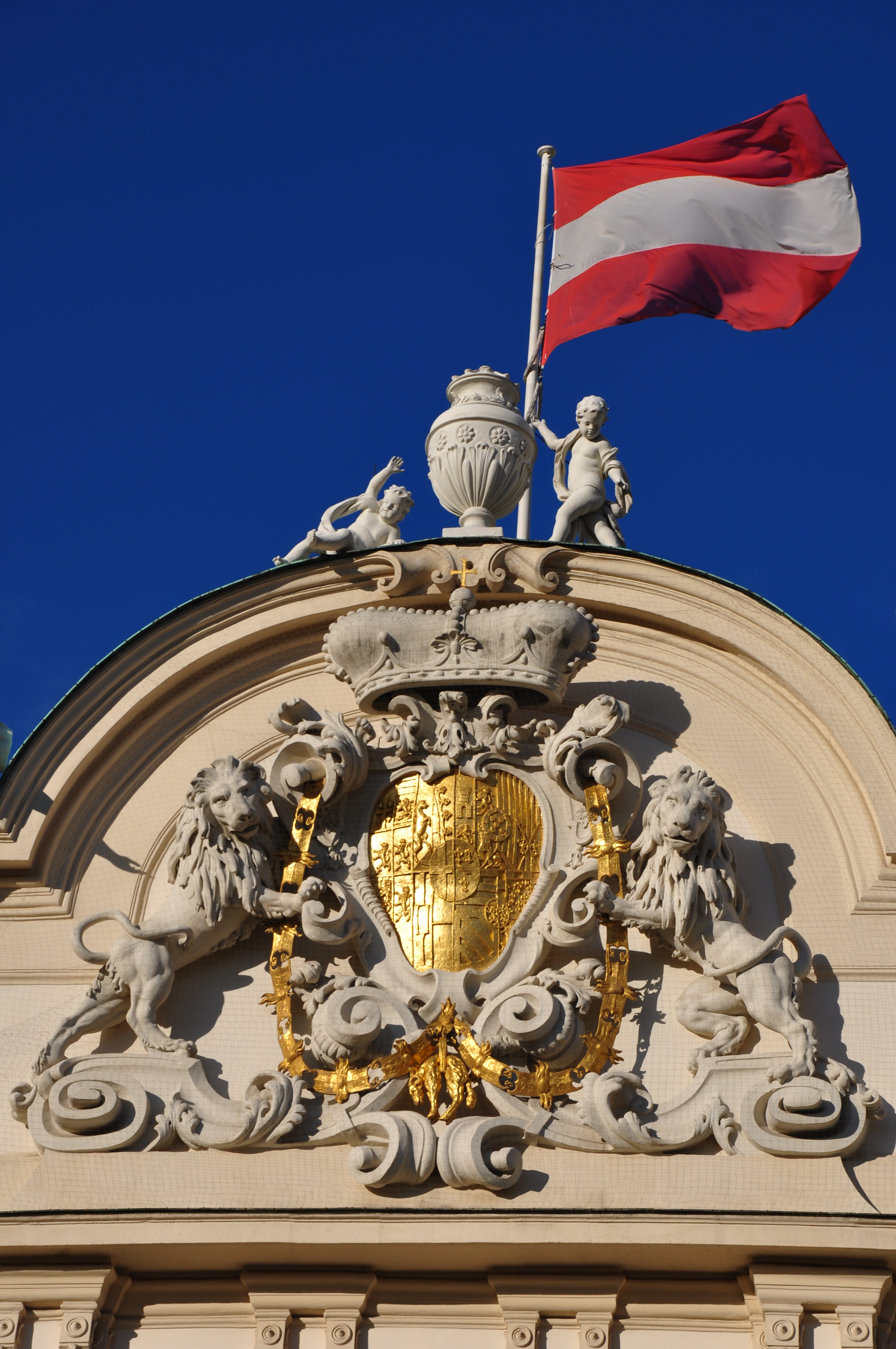 Here’s the Austrian flag as seen fluttering on the top of the Belvedere Palace, which also hosts numerous art exhibitions throughout the year.

What struck me about Vienna was that it is an exceptionally culturally with it capital city. Art exhibitions are not just for those that are slightly greying on . And even on weekend nights. I spent quite a few hours at the Gustav Klimt exhibition, this permanent exhibition is the world’s largest collection. I’m always fascinated by architectural details and this coat of arms is a fine example. 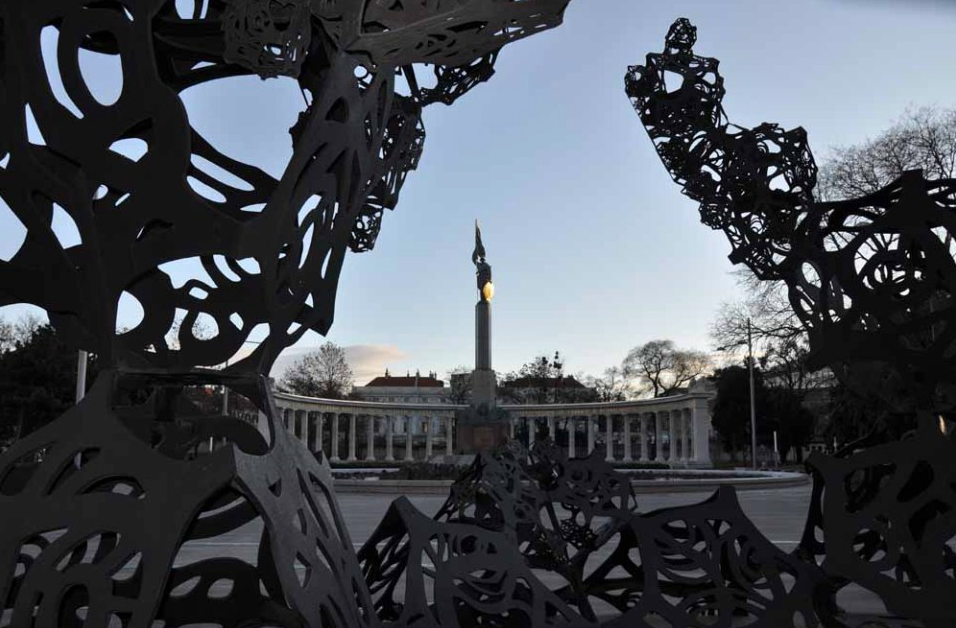 The memorial, which is situated at Schwarzenbergplatz, was erected in 1945 to commemorate the 17,000 soviet soldiers, who lost their lives during the ‘Battle for Vienna’ during Soviet Russia’s occupation of Austria. It has been vandalised frequently and has been on the receiving end of a great deal of criticism after the City of Vienna assigned money for its refurbishment. Although many prominent, right wing Austrians have called for it to be demolished (along with the demolition of similar monuments in former Soviet satellite states in Europe) this has never come to pass. Vladimir Putin, who was then the acting Russian Prime Minster, paid his respects to the Soviet  relic during his visit in 2007. He thanked the Austrian people for allowing it to remain. The monument’s supporters claim that it is a necessary reminder of Austria’s and Europe’s past. Here it is pictured from inside a modern art exhibition that is located on the square. Even though the sun was setting it illuminated the soldier’s golden shield. 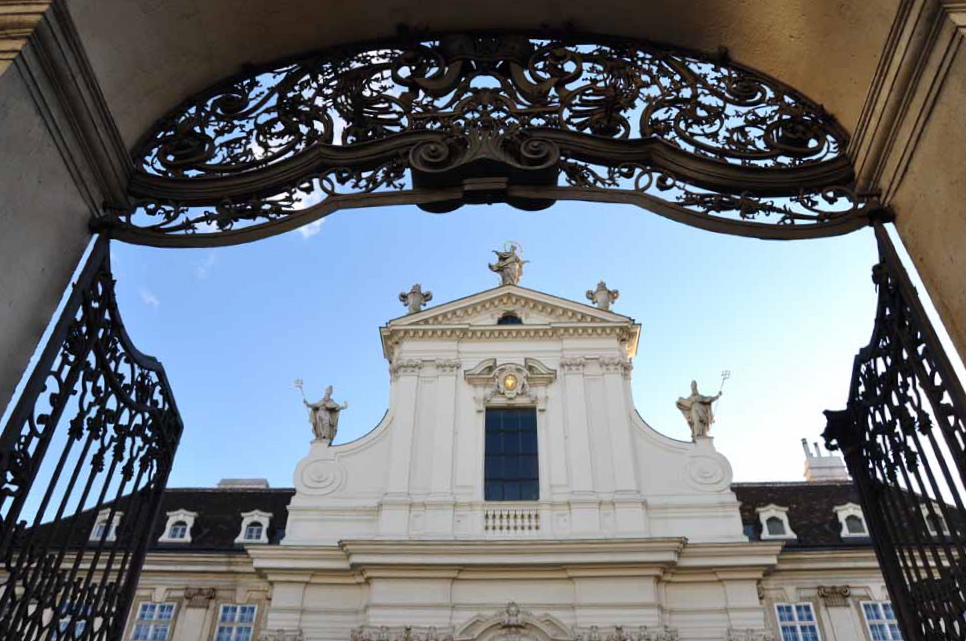 What intrigued me about this beautifully crafted cast iron gate – at the entrance of Maria Heimsuchung Catholic Church which borders the Belvedere – was the similarity in its design with that of the permanent modern art ‘statue’ above, which is situated less than one kilometer away. This makes me wonder whether or not the modern art ‘statue’ in Schwarzenbergplatz is supposed to be a modern mimetic representation? This brings to mind the notion that often art begets art. Perhaps, this particular gate’s design and others like it served as the inspiration?