Herzogshof facade is truly striking: it is covered in frescoes depicting Greek and Roman gods. It was originally painted in 1742 by Johann Mayer, but since then has received multiple new coats of paint. It’s only a couple of hops and skips away from the main tram station as well as Graz’s Town Hall. A handful of pointing fingers lead your gaze towards the most famous figures, which are seen lazily basking in the morning sun. 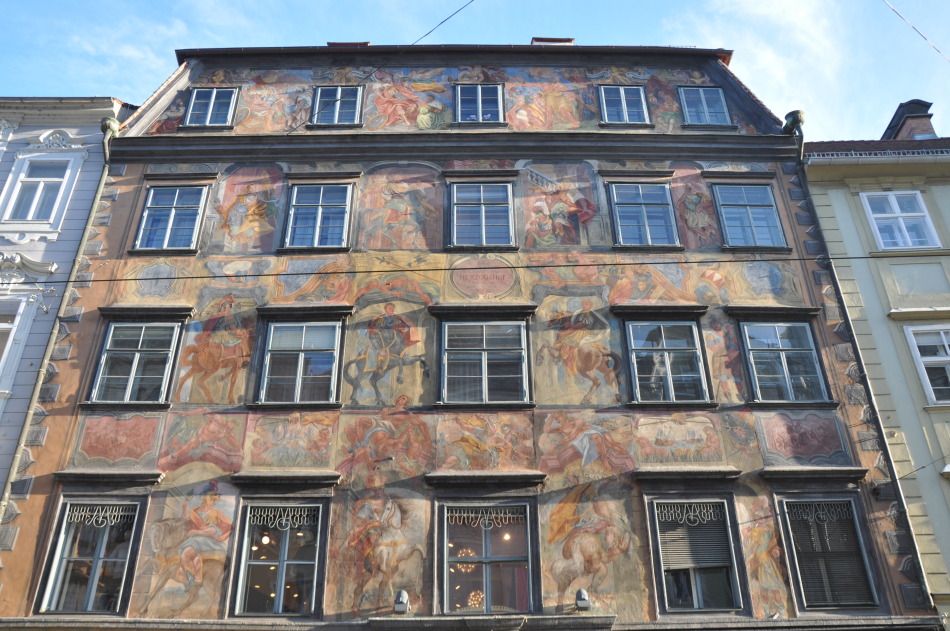 Neighbouring St. Catherine’s church, in the old Austrian town of Graz, you will find  the mausoleum where emperor Ferdinand II is buried. It is here that you can see the magnificent fresco on the ceiling of the oval dome that is surrounded by intricate carvings – fit for the final resting place of the emperor. The emperor, however, was laid to rest in a half-finshed tomb, his grandson commissioned it to be finished.  Today, the mausoleum is a UNESCO World Heritage Site. 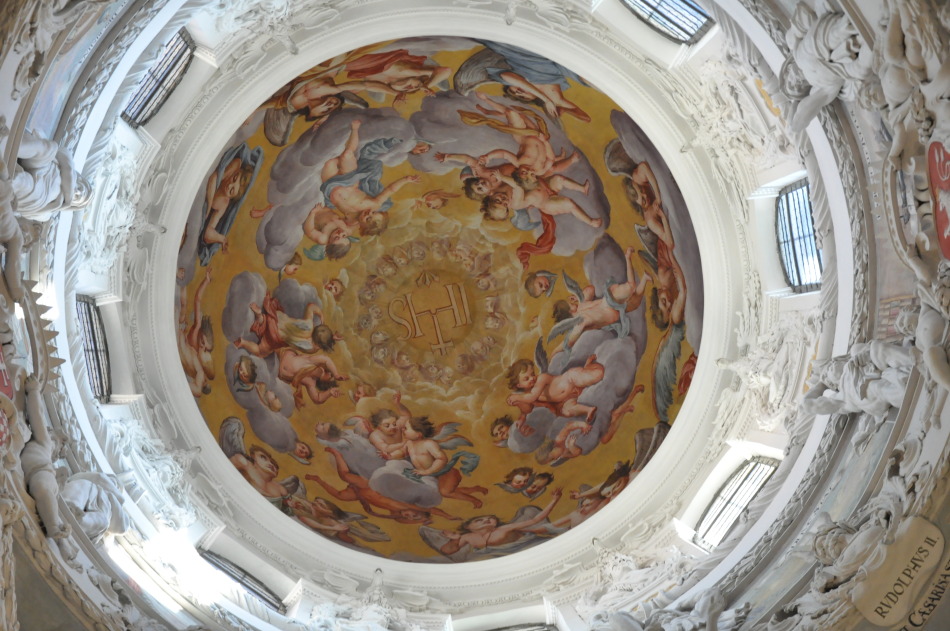 St. Catherine’s Church, with its large dome, was the first of its kind to be built in Austria, and outside of Italy in the early seventeenth century. It’s easy to recognise by its turquoise domes and the golden statues that bask in the afternoon sun. 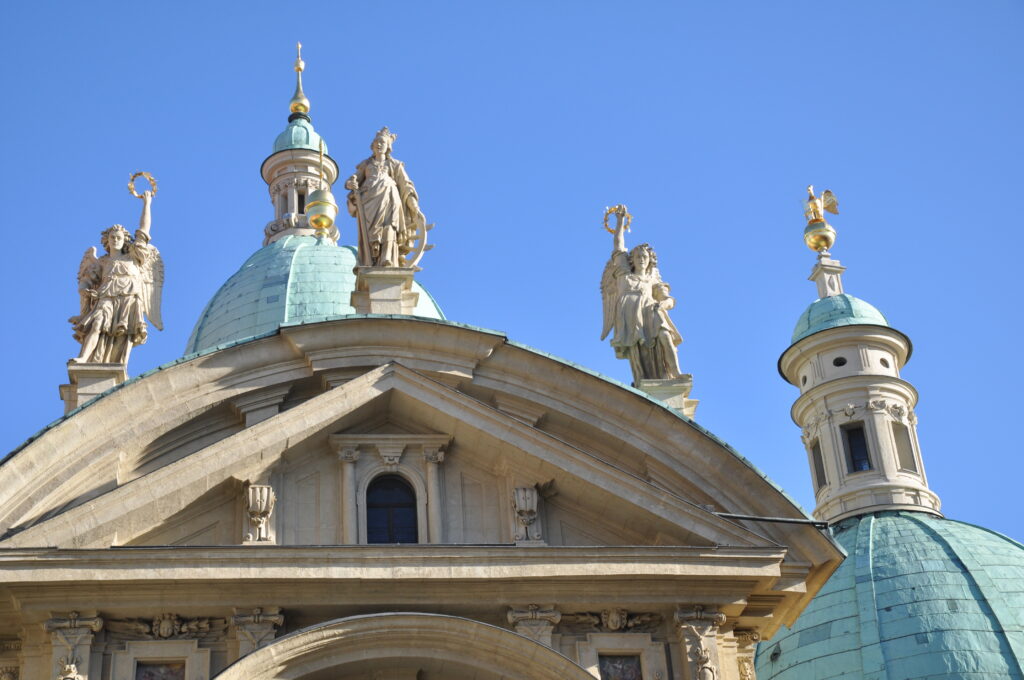 Hitler and Mussolini in Church

Stadtpfarrkirche, a gothic church located on the main street in Graz and just off of Hauptplatz (the main town square), dates back to the 14th century. It is the oldest church within the city and holds UNESCO World Heritage status. Did you happen to notice anyone incongruous in the stained glass windows?  In the top right hand corner, perhaps? This church created quite a stir in the 1950s because the stained glass windows, which were damaged during the Second World War, were replaced by artist Albert Birkle, who depicted Adolf Hitler and Benito Mussolini standing side by side, watching on as Jesus was being tortured. It is a depiction of darker times in the city’s and the country’s history and is possibly the most unlikely of places I can image to see a portrait of the two dictators. I thought it an interesting juxtaposition. 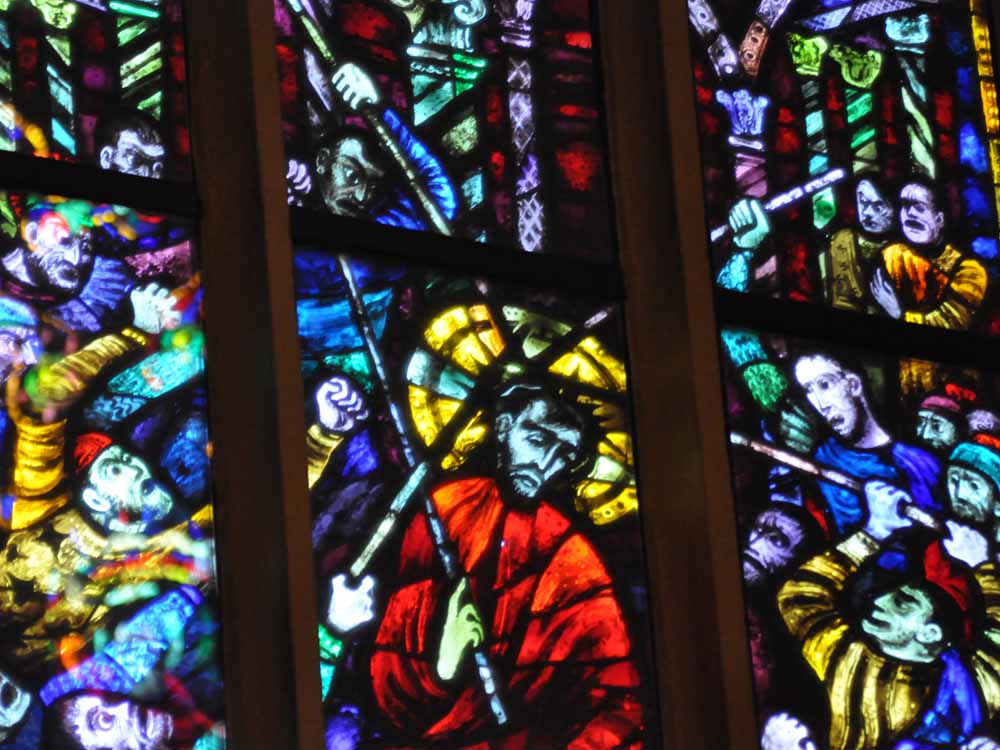