Three thousand artworks hung pegged to twine as hundreds weaved between them, like a needle sewing thread. They stopped. They stared. They smiled.

The historic electric workshop in Newtown – which houses the Sci-Bono Discovery Centre – was transformed into a walk-though art gallery for the “Night of 1000 Drawings” exhibition. With all the support 1000 Drawings has received, within a few years it may have to change the number in its name. The not-for-profit organisation has numerous offshoots around the world. It focuses on community development and the uplifting nature of art for both artist and aficionado.

Strangers became friends at the weekly doodle sessions around Johannesburg in the run up to the penultimate event. On the night, I found my rhino sketch displayed. Paintings by professionals swayed side-by-side with drawings found on a mother’s proud fridge. 1000 Drawings‘ motto is: “Doodle for a difference. Draw anything, with anything on anything A5.”

While one may find an artwork that may soon rival The Card Players by Paul Cezanne to become the most expensive painting, the majority were drawings, paintings and photographs by you and me. As the viewing session ended and 7pm drew nearer, clusters formed around sought-out artworks as each was sold for R100 to the first to place their numbered sticker on the corresponding peg. R170000 was raised for various charities around Jozi, such as Paballo ya Batho. This inner city homeless care organisation is close to my heart as I have volunteered at the Bread Drive many times.

At the end of the evening one question remained: what are they going to do with all those clothes pegs?

Probably use them for the inaugural 1000 Drawings event in Cape Town in 2014. 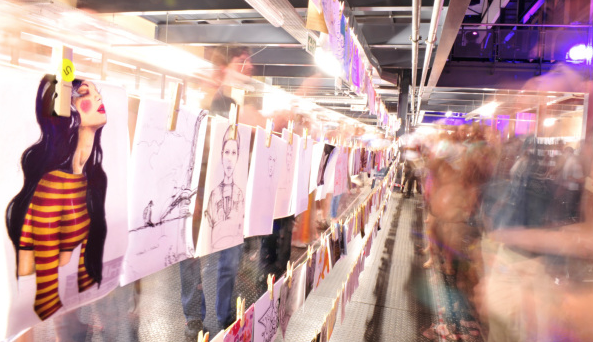