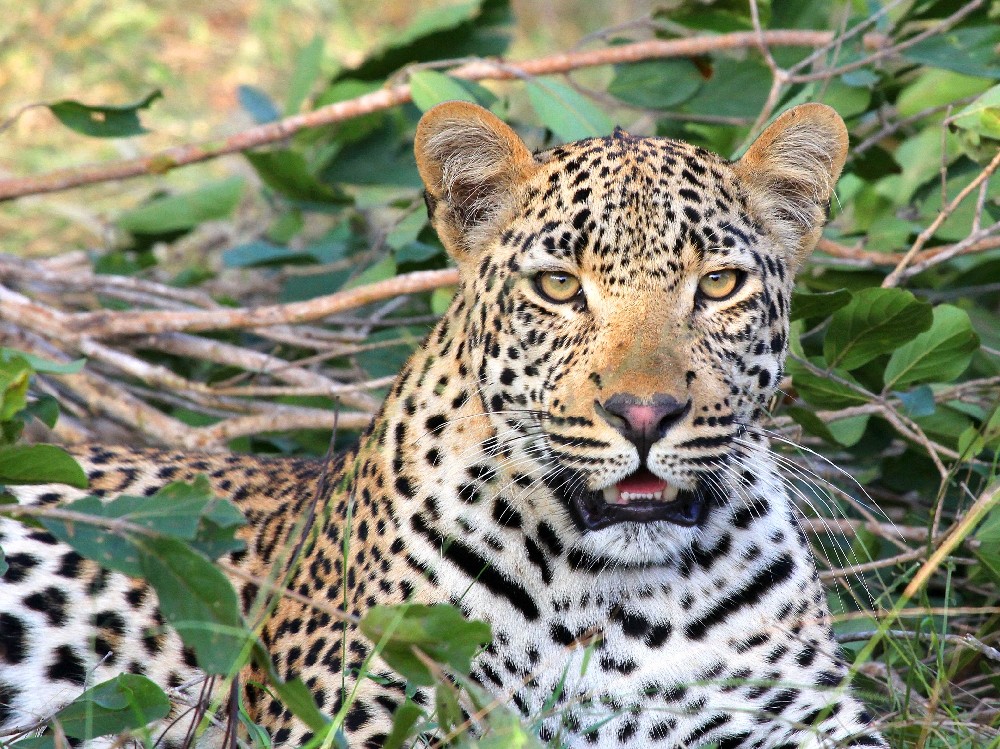 Becks Safari Lodge in Karongwe Private Game Reserve, near the Kruger National Park in South Africa, has the finishings of a five-star property, an African bush ambiance, and is small and private enough to make you feel as though you have it all to yourself. And the leopards. 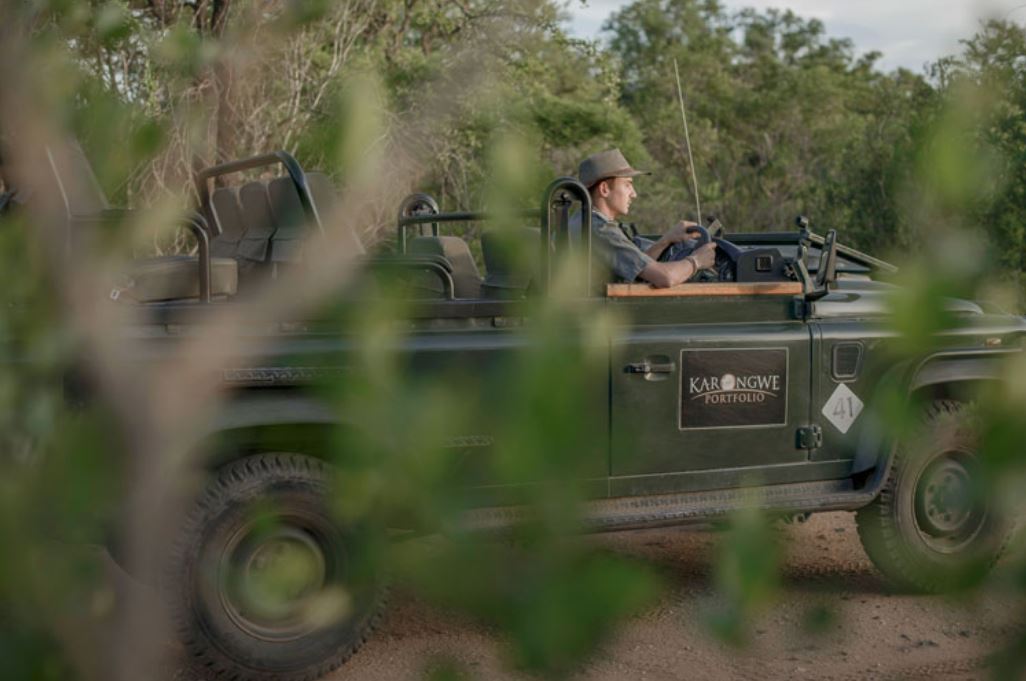 The late afternoon wind plays a symphony on the blades of grass accompanied by a chorus of cicadas. The gargle of our game drive vehicle’s engine rouses the dust into a golden dance. Impalas sound the alarm call. We wait. My heart is drumming my chest. A current of liquid excitement to the head. His rosette coat. The curl of his tail. He walks into view up a sharply ascending slope. Our exclaims crescendo. He acknowledges us with a momentary glance over his undulating shoulder and gaits on behind a curtain of foliage.

Our guide Sondy Mathole, with his signature brown leather cowboy hat, tracks his trajectory. Our vehicle surmounts the slope. We forge a way through the dense vegetation where there is no road. Our tracker, Freddy Magomame, clears the way where he can. This is the definition of bundu bashing. It’s only us, spread between two vehicles, at the sighting – one of the many pleasures of staying at a private game reserve. Then we play the waiting game anticipating another cameo performance, as Sondy whispers a BBC Planet Earth narration on leopards. 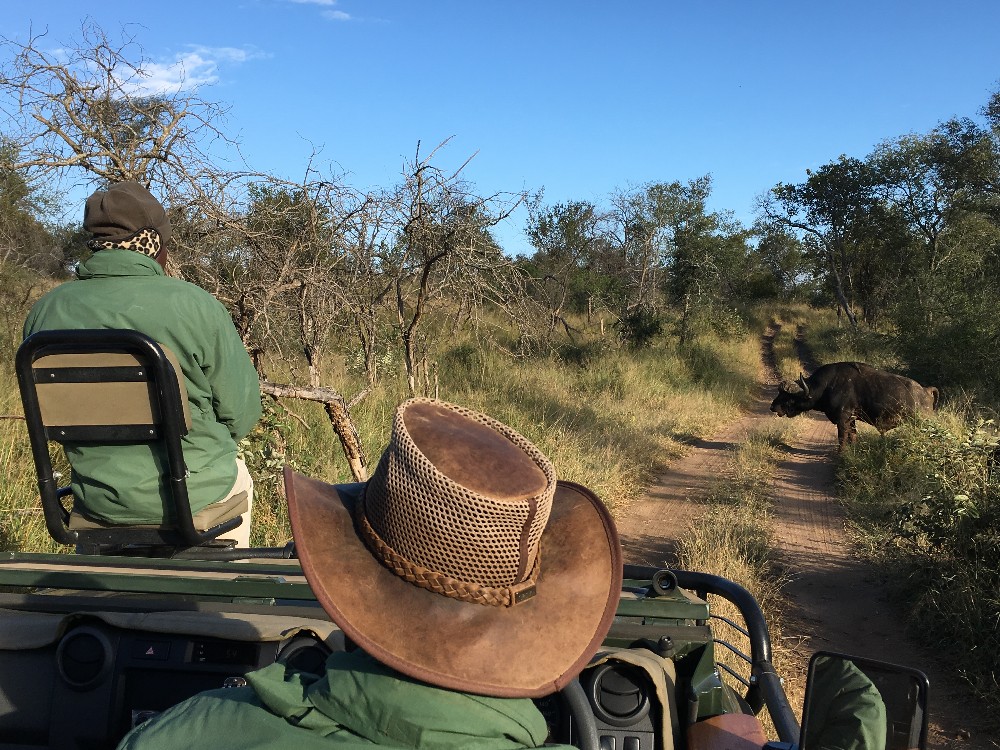 Freddy is the silent type. He’s an observer. So when he leaps off his tracker’s chair he ignites our anticipation. What has he seen that we’ve missed? He energetically strips his shirt and flings it to the ground. “Spider,” he grins sheepishly. Sondy teases that his animated dance has probably scared off the ingwe.

The full moon rises. Our game drive continues, by the light of the moon, as we make our way through the 9 000-hectare Karongwe Private Game Reserve in Limpopo Province, back to its newly-minted Becks Safari Lodge. “The old chief of this area was called Karongwe,” tells us Sondy, to add a bit of context.

Suddenly he stops the vehicle, jumps out without a word and is swallowed by the night. We play the waiting game once again. His outstretched hand reappears with a flap-necked chameleon that appears to be jigging to the sounds of the night. Sondy explains how these delicate reptiles manipulate layers of specialised cells – a mixture of pigmented, light-reflecting and melanin cells – beneath their transparent skin, just like the paint on an artist’s palette to camouflage themselves to their surroundings. 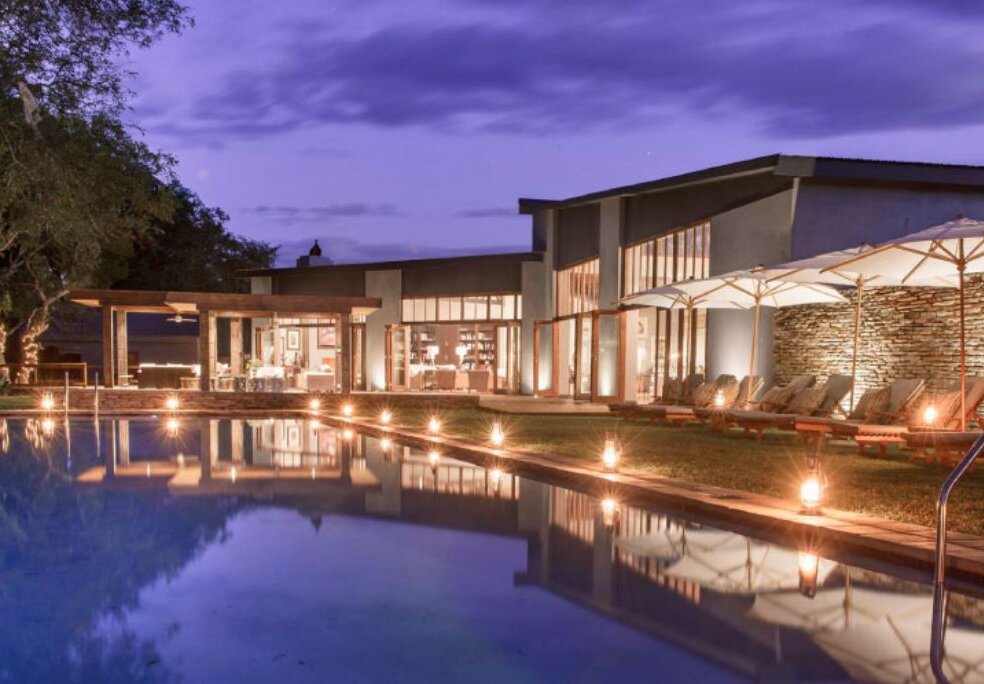 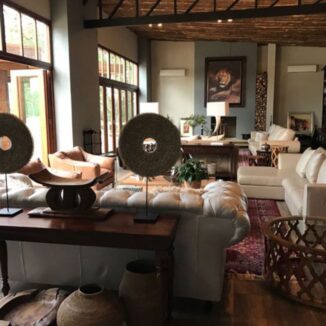 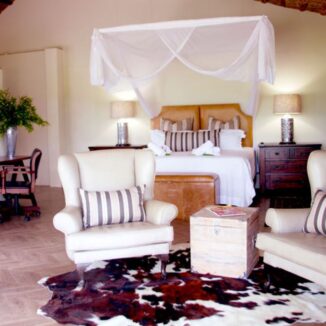 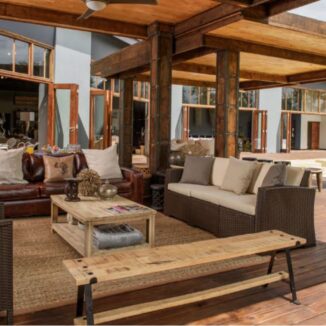 When we finally arrive at the modern safari-chic lodge Zirk Comerma, who is the Group Operations Manager, is standing on the wooden deck, shining a light across the Makhutswi riverbed into the flood plains beyond. “Leopard!” Raspy growls confirm his claims. Green eyes glint. Disappear. And reappear again a few metres away.

A few steps away songs from the adjacent Boma beckon us inside. In true South African style the large braai is weighed down with prawns and tilapia, beef and lamb as well as game meat, alongside a hearty selection of starches and salads. Our satiated appetites are treated with a dessert of song, ululating and dance by the friendly staff.

The bon fire embers indicate it is well past bed time. As each of the 10 luxury safari suites are canvas-lined, I can hear the nocturnal sounds of the bush awakening. Spotted hyena calls lullaby me to sleep. 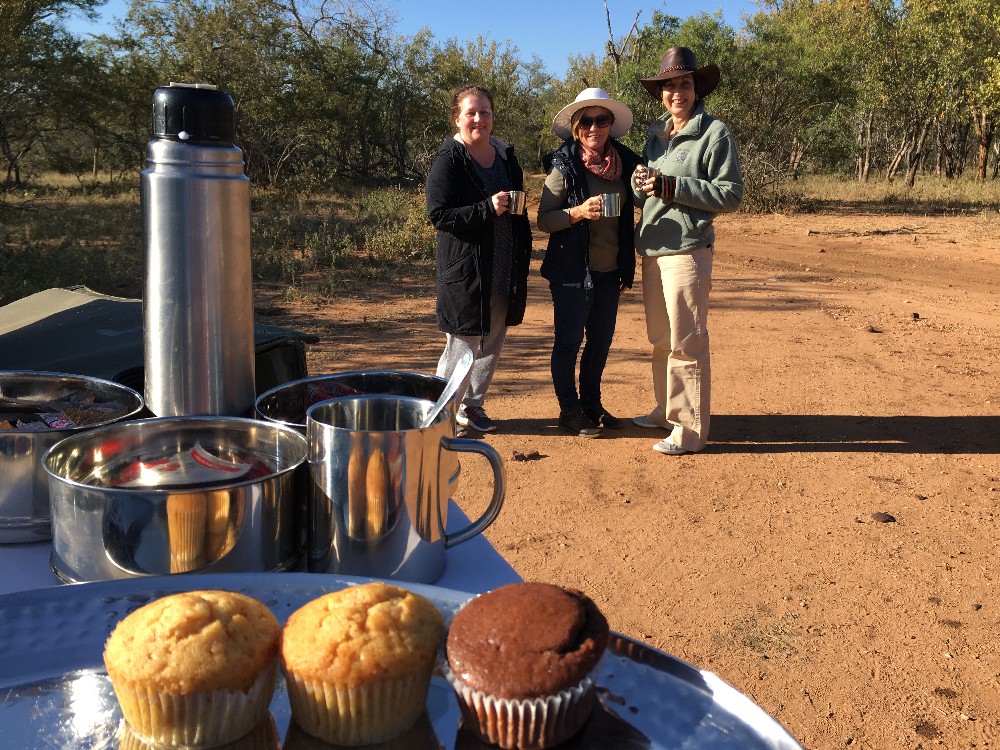 The moon is low on the horizon when I join the sunrise game drive. There’s hot chocolate with Amarula (a South African favourite) and more of those delicious home-baked rusks and cookies found in my spacious suite, as well as muffins. I find that early mornings seldom disappoint. On our safari we see a pride of lions and their cubs yawn a welcome to the new day. As we drive through the dappled riverine forest I dream of yet another close encounter with an elephant bull, but today they’re nowhere to be seen.

Sondy draws on his 16 years of experience to teach us the ways of the bush as we make our way through Big Five territory. He extends his finger towards a Burchell’s Coucal. “If you hear them call at the hottest time of the day that means the rain is coming,” he says. There are well over 365 bird species in this part of South Africa’s Lowveld.

Next on the agenda are the rather limited mating preferences of the Hamerkop, as well as all the medicinal properties and alternative uses of elephant dung, which even I, as a self-confessed elephant expert, didn’t know. As we drive past a water hole, Sondy shows us how “the Foam Nest Tree Frog builds its nest over water. After around six days the tadpoles fall into the water below.”

An early morning demands a relaxed afternoon. Whether it’s in the 20-metre infinity pool, on the shaded loungers, lost in a book on a sofa in the communal lounge or on your private wooden deck that juts out into the wilderness. My 90-minute full-body massage at Thera Naka Spa is followed by a high tea of freshly-baked cakes and desserts, fruit skewers and refreshments.

This has me thinking that Becks Safari Lodge is somewhere between an exclusive five-star hotel – the kind you’d expect to find in Sandton – and the raw wilderness of the South African bush. I think of how the foreign tourists to Karongwe must envy us. Envy us for the tranquillity of the bush, its relative proximity by road or air, and that leopard sightings are almost a daily occurrence.

What to know before you go to Becks Safari Lodge

How to get to Becks Safari Lodge

Malaria in the region of Becks Safari Lodge

Becks Safari Lodge is in a low risk malaria area, so it’s best to consult your medical practitioner before travelling. Remember to take along long-sleeve shirts and trousers to wear after sunset and bring along an insect repellent. All the four-post beds at Becks Safari Lodge are draped in mosquito nets to allow for peaceful sleep.

When to visit Becks Safari Lodge

Becks Safari Lodge can be visited year round. Each suite is air-conditioned for the hot summer months, while the communal bon fires and blankets will keep you warm in winter. During the dry winter months (June to August) the visability on a safari is better due to less foilage, while the African bush erupts in various shades of green from October through until April.  High season is from 01 January – 30 April and 01 September – 31 December. Low season is from 01 May – 31 August and between May and July.

I was hosted at Becks Safari Lodge and originally wrote this article as part of my freelance work. Some of the photographs in this post have been used with kind permission of Becks Safari Lodge. As always, I maintain full editorial control of all content published on this website, but you already know that. ;)