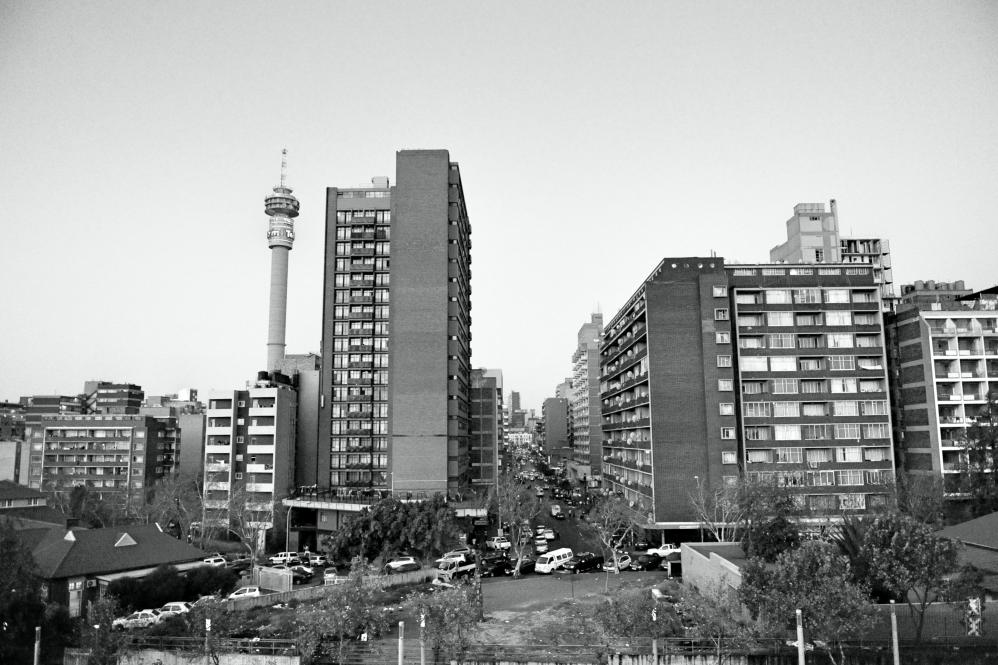 When you explore eGoli, the city of gold, you’ll witness traces of the city’s early days from the 1880s when it was established as a gold mining town, and you’ll also see remnants of its fall, but know that you’re partaking in its rejuvenation, that’s because Johannesburg – Africa’s most-visited city – is experiencing a second golden age even though it celebrated its 130th birthday this month.

The City of Green

Chardonnay, a wheel of Camembert, raspberry jam, crackers and views of Johannesburg from 1 807 metres. We’re sitting on a blanket on a rocky outcrop – among couples, picnicking friends and photographers – atop the second highest point in the city, as the sun makes its exit, stage left. Northcliff Ridge Ecopark faces the Magaliesberg Mountains, which outline the contours of the horizon on a clear day. At my dangling feet lie Sandton, Rosebank and Cresta. From here, the city is swathed in green: more than 10 million trees breathe life into the greater Johannesburg area and there are 2 343 parks and nature reserves to explore. And with 4.3 million international visitors in 2014, Johannesburg is Africa’s most-visited, two years in a row. As the wind flirts with my hair our wine glasses chime: “To Joburg. And to the weekend.”

Not many cities, especially the size of Joburg, can brag about having a nature reserve a mere 12 kilometres from the city centre. The 680-hectare Klipriviersberg Nature Reserve is set just south of the city. Yet, you may be misled into thinking that you’re much further away by the 200 bird species you can spot along the six hiking trails, as well as the zebras, springboks and red hartebeest that cross your path. Best of all: entrance is free. 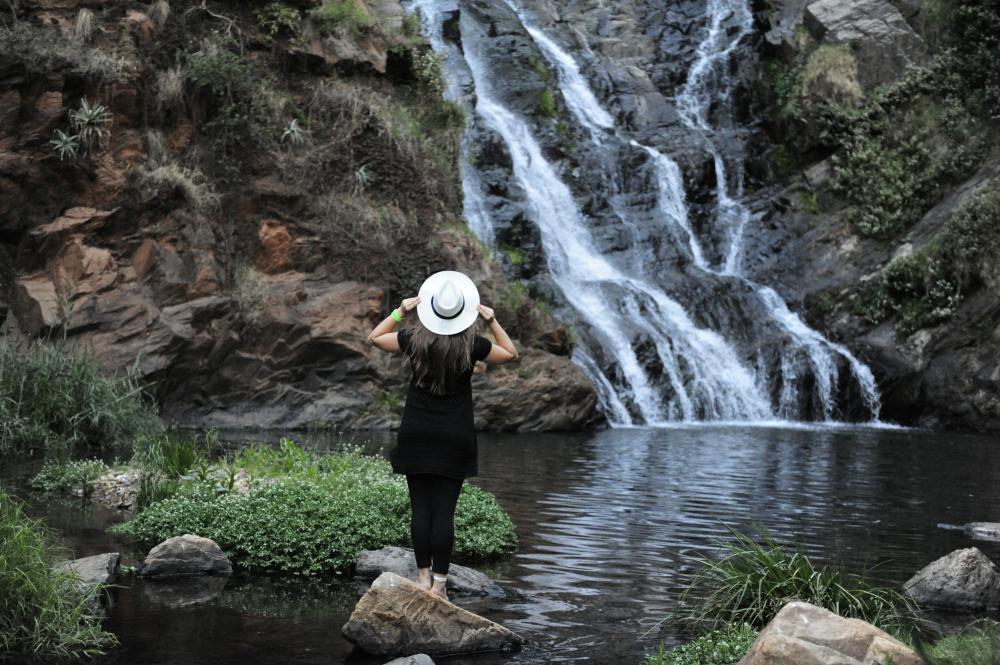 Spring is the best time to reconnect with nature and another natural retreat is Walter Sisulu Botanical Gardens, 30 kilometres west of the city. Savour a picnic in this rocky Highveld Grassland area, with its 600 endemic plants, to the soundtrack of its 120 bird species. See how many you can find from the floating bird hides along the dams. Any Joburger can tell you that this botanical garden is famed for the city’s only breeding pair of black eagles that nest near the lip of the Witpoortjie Waterfall. A brisk hike to the water’s edge, just before it tumbles 70 metres, allows a closer look at the region’s geology. 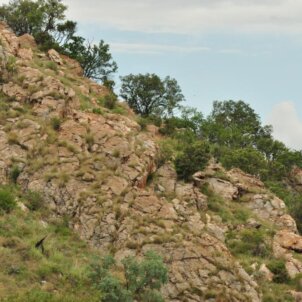 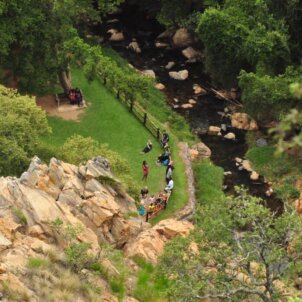 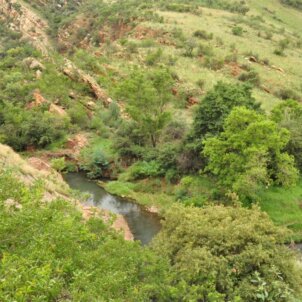 Make sure your camera batteries are fully charged, apply sunblock and take a hat on a hike through Melville Koppies with your guide Wendy Carstens. This nature reserve and heritage site is divided into three sections. The 50-hectares central section is home to five micro environments, but it’s best known for its geological formations and the remains of a Iron-Age village and smelting furnace. The western part of the reserve is where you’ll snap panoramic photographs, while the eastern section is known for its grasslands.

It’s best to go with a group of friends, on a guided tour or group hike. On a guided tour, guides introduce visitors to various aspects of the koppies, such as the geology, archaeology and history, flora and fauna. You’ll stop along  various points of interest on a circular route through Melville Koppies Central. Bring a snack and water for the half-way stop during the group hike. If there are enough people, they are split into two groups following an easier and a harder route. 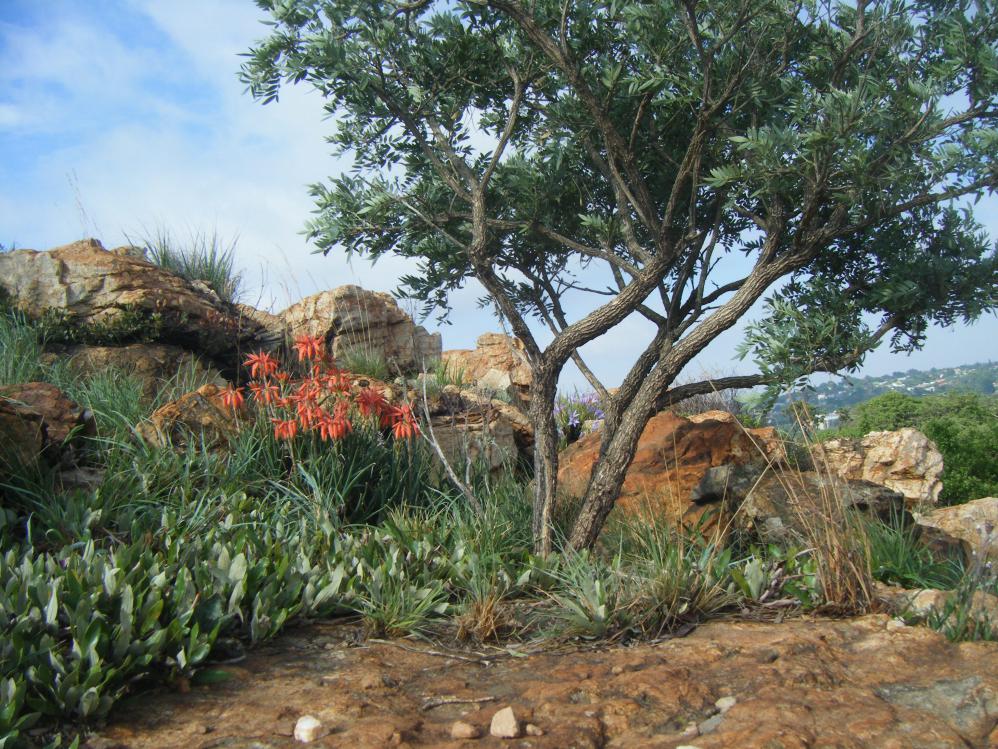 Grab a book and picnic basket and head to the Johannesburg Botanical Gardens, where you can watch rowers, canoeists and sailers train on Emmarentia Dam or even try yoga on a stand-up paddle board. Then feed the ducks from the wooden deck before retreating to a quiet spot under the oak trees. The entire garden can be visited along the pathways without backtracking. Stroll through the rose garden on your way out. Greenside, a popular street-side neighbourhood and night-time watering hole, is just around the corner.

The City of Gold

If you want to feel like a tourist and need to tick off the most popular attractions then the hop-on, hop-off Joburg City Sightseeing Bus is the most convenient way to do so, but with 12 stops along the way be sure to get an early start. The busiest stops are the rooftop of Africa – the 223-metre high Carlton Centre, which has been the continent’s highest skyscraper since 1973 – the Apartheid Museum, which needs no introduction and Constitution Hill, the fort that served as a prison for political prisoners. Other stops worth a walk about are the Wits Origins Centre, Gandhi Square and the Mining District Walk. 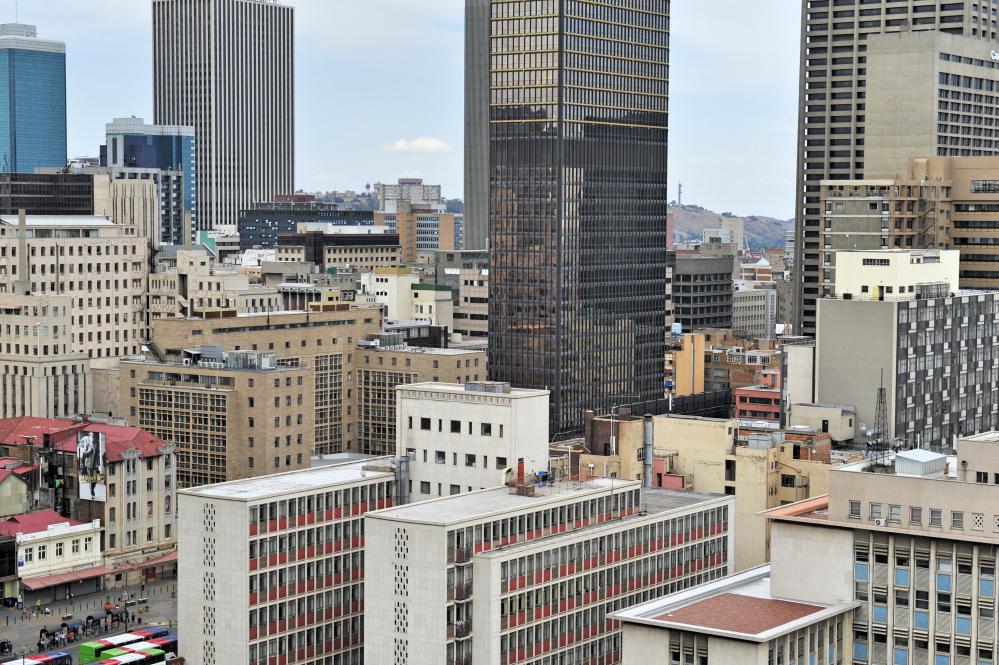 On the narrated bus tour, as you labyrinth your way between the grid-iron streets, you’ll learn about the city’s gold rush that started in the late 1880s (on the 4th of October 1886 to be precise). It saw Art Deco buildings go up like umbrellas in a Joburg thunderstorm, during the 1930s. And today Ekurhuleni, or the Greater Johannesburg ares, has the second highest concentration of Art Deco buildings in the world, after Miami, Florida. Here are some other facts you didn’t know about Joburg. 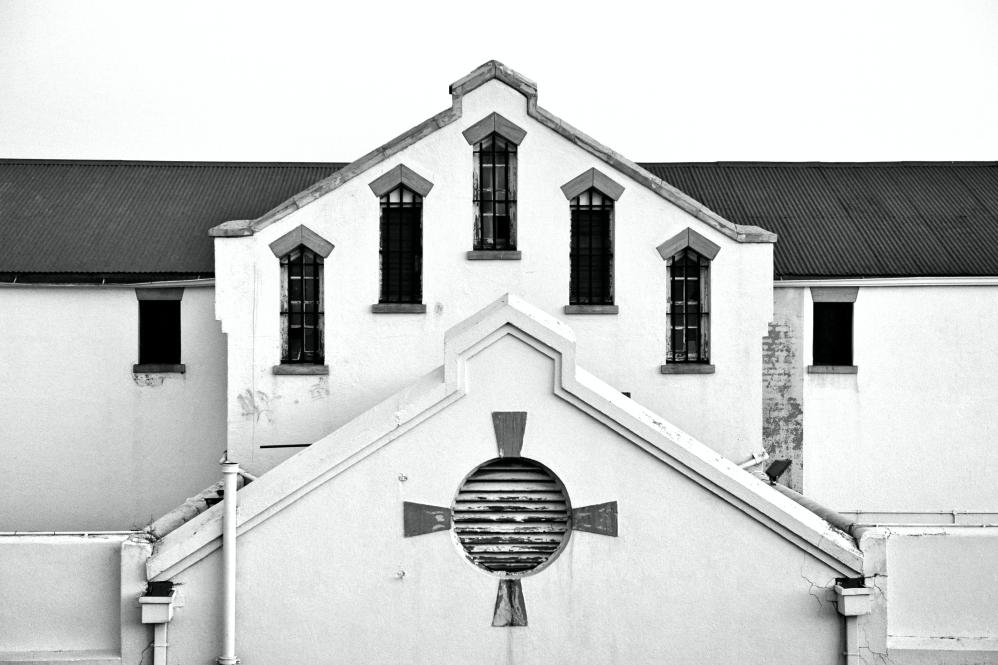 Don’t forgo the hop-on, hop-off Soweto tour, where you can admire Soccer City Stadium, bungee jump from the Soweto Towers, visit the Hector Pieterson Memorial and Museum, and walk along the country’s most famous street: Vilakazi. While you’re there consider exploring Soweto even further on two wheels with Soweto Bicycle Tours.

The City of Markets

Inner city gentrification has seen formerly forgotten buildings being reclaimed by creatives and young professionals and transformed into small shops, businesses, office blocks and penthouses. This lively resurgence – which has brought with it festivals, pop-up events, concerts and performances – has coaxed suburban Joburgers to reacquaint themselves with parts of the city they have overlooked since the economic heartland shifted to Sandton and Rosebank in the 1990s.

Each Saturday morning locals make their way to Neighbourgoods Market (modelled on the Old Biscuit Mill in Cape Town) for homemade food such as Mediterranean tapas, Paella, Polish sausage, mushroom skewers and nutella-filled pancake envelopes. You can even have oysters with champagne should you fancy being, well… fancy. This former paking lot gets really busy, so it’s best to come early if you want a seat on the wooden benches. Browse the second floor for crafty souvenirs, vintage clothing, wooden accessories, jewellery, leather goods or just grab a drink at the rooftop bar. 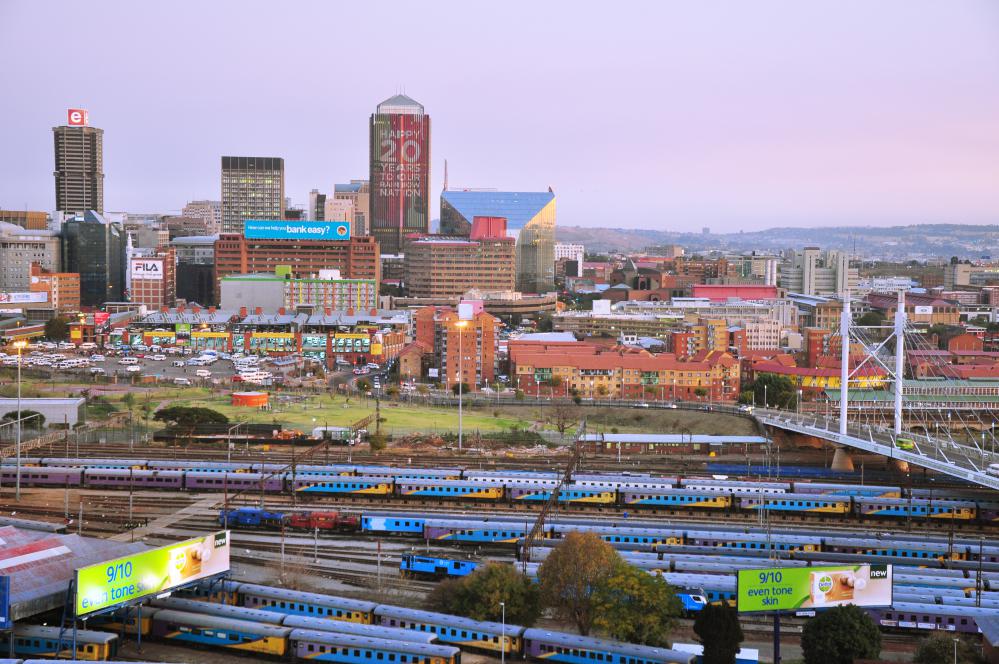 Views from nearby Neighbourgoods Market

1 Fox Market in Ferreirastown is found in repurposed warehousing that’s believed to have been the store houses for the city’s trams and buses. From Friday to Sunday you can buy beer on tap at the MAD Giant Craft Brewery, party to live music at The Good Luck Bar and browse the stalls at the Food Market Shed. Unlike many other Joburg markets, it’s much quieter.

If you prefer a natural and rustic atmosphere then drop by the Fourways Farmer’s Market on a Sunday morning or afternoon instead – it’s located in a nursery and you can sit on hay bales while the kids play on a jungle gym. There are wooden benches beneath the trees and spots under the thatched gazebos.  On a summer’s day, there nothing more refreshing than buying local soda or ginger beer from a porcelain bath full of ice, where the bottles are kept cool. Meander between the stalls, although be warned that this may make your choice harder. Your food – no matter if you choose a banting-friendly veggie wrap, a Balkan burger with a generous dollop of chakalaka sauce or a slice of freshly-baked cake – comes with a side of live music. 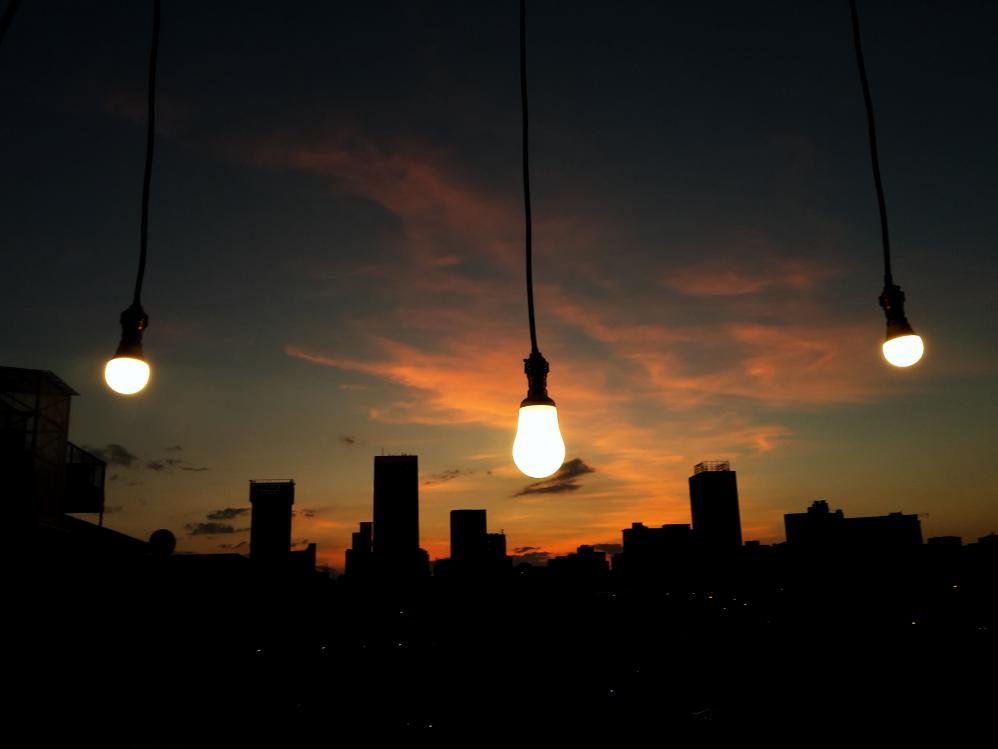 But my favourite Johannesburg market is Arts on Main in Maboneng Precinct on a Sunday, where we dance the Cuban Salsa, Bachata and Kizomba on the rooftop canteen restaurant until dusk. The sinking sun mimics my emptying wine glass. We’re in the company of those who are not yet ready to bid farewell to the weekend and so the fancy footwork goes on. Foot-tapping onlookers are savouring the artisanal food bought from the downstairs market; some are unexpectedly pulled onto the dance floor in a flurry of skirts. Don’t leave before walking along Fox and Kruger Streets, where you’ll discover Bioscope independent cinema and hear laughs emanating from POPArt Theatre. You’ll also come across people posing next to graffiti, a man selling cigars from a wooden box balanced on his shoulder, as well as artists and craftsmen selling their wares at a pop-up pavement market. Then there’s The Living Room. Ahhh… where do I even begin? I am modelling my future home on this urban jungle of wooden floors and vertical gardens, whose leaves rustle in the wind, keeping time with the dangling light bulbs.

I haven’t yet had a chance to visit the newly opened Joziburg Lane, but will update this post as soon as I do.

The City on Foot 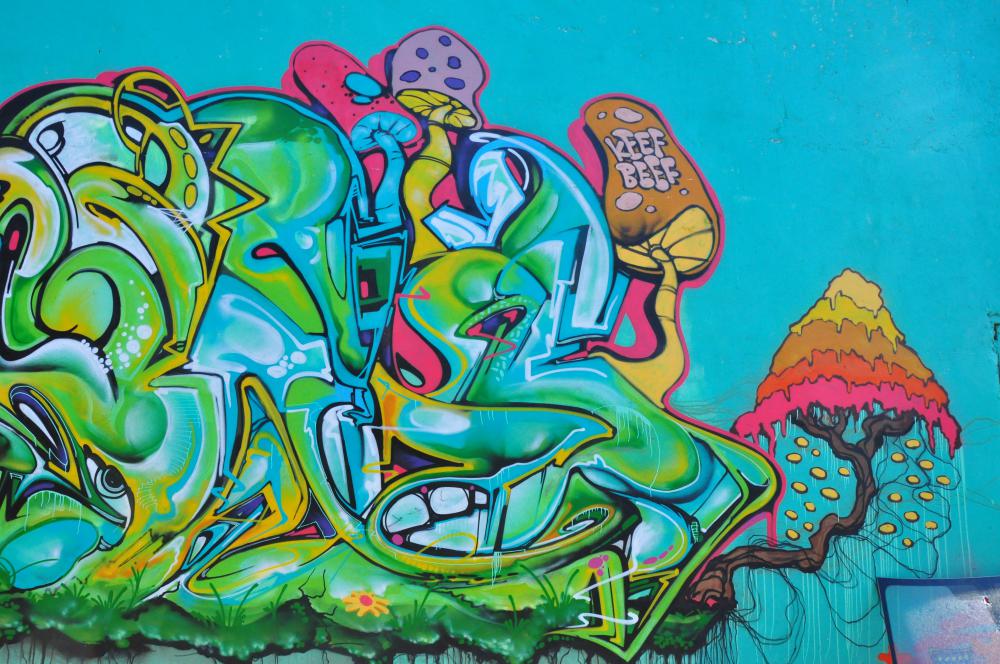 Newtown, Maboneng and Jeppestown are an open-air gallery of graffiti and street art from around the world. Masterpieces by local graffiti writers such as Bias, Mars and Fin are painted alongside those by American street artist Shepard Fairey, Solo One from London and German graffiti writer Angel. Collectively they have made Johannesburg one of the world’s top graffiti destinations alongside New York, Berlin and São Paulo. You can navigate beneath vividly-painted highway overpasses and zig-zag along streets on a graffiti walking tour with Jo Buitendach of Past Experiences Inner City Walking Tours. 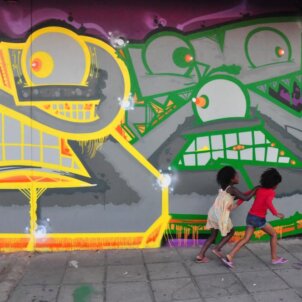 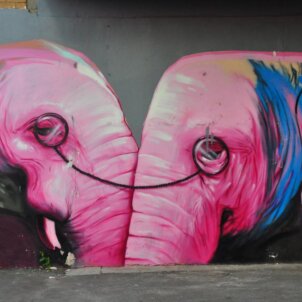 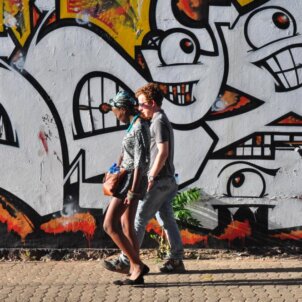 For an immersive encounter with the real Johannesburg, a walking tour through Yeoville, Hillbrow and Berea with Nickolaus Bauer and Michael Luptak of Dlala Nje (meaning ‘just play’ in isiZulu) is your best bet. They’re based in the city’s most infamous building, the cylindrical 54-storey Ponte Tower. The tours are the funding model for the children’s community centre they run here. Silhouettes of the city from the 52nd floor give you an introduction to the citsycape and its people you’re about to truly meet for the first time. The tours turn perceptions of the much-maligned suburbs on their heads. Shake hands with the shop owners, buy a unique jewellery piece from a street-side vendor, pose for toothy-smile photos and later you’ll be invited into Hillbrow Tavern to eat and cheers with the locals in jovial Joburg fashion, because the city’s golden years are here. And after all that walking you’ll probably want to take a dip in one of Joburg’s swimming pools.

Have you ever been to Johannesburg? What did you think about it? Please share your experiences with me in the comments below.