Home Africa Fall in love with Seychelles (in 10 easy steps)

Fall in love with Seychelles (in 10 easy steps) 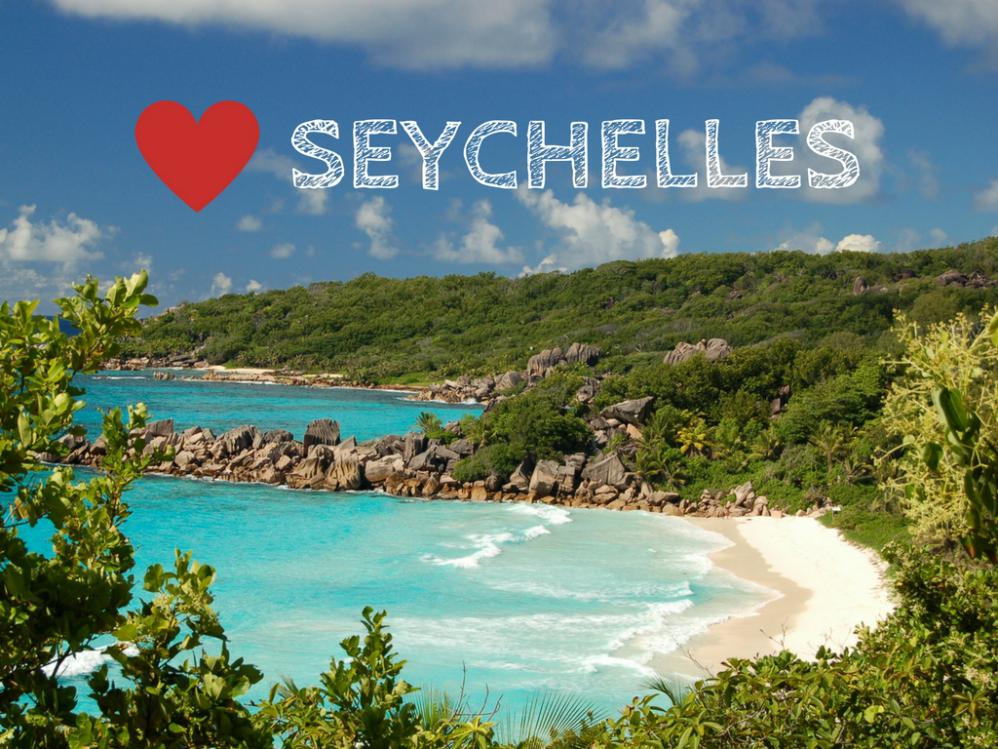 After a week of cavorting around Mahé, Praslin and La Digue islands, I realised just how easy it is to fall in love with the Seychelles.

This Indian Ocean archipelago is exceptionally charming… and knows it. It’s many allures are undeniable. Firstly, it’s 1 000 miles from the nearest sight of foreign land (so at least you’ll have privacy). And you don’t need a visa to visit (which let’s be honest is like being interviewed on a first date – the worst). While most tropical islands are knock-you-off-your-feet beautiful, and I experienced similar heart palpitations when I visited Mozambique’s Bazaruto, South Korea’s Jeju-do and Sri Lanka, it was… well, different with the Seychelles.

There’s really no saying how long it’ll take for you to fall for this granitic and coral cluster of 115 islands and islets. For some it’s at the first sight of Mahé surrounded by cerulean waters from the window of an Air Seychelles flight, for others it’s over a dinner of Creole crab curry, and for me it when I discovered La Digue.

Here are 10 really easy steps on how to fall in love with the Seychelles.

1. Buy fresh produce from a market for breakfast 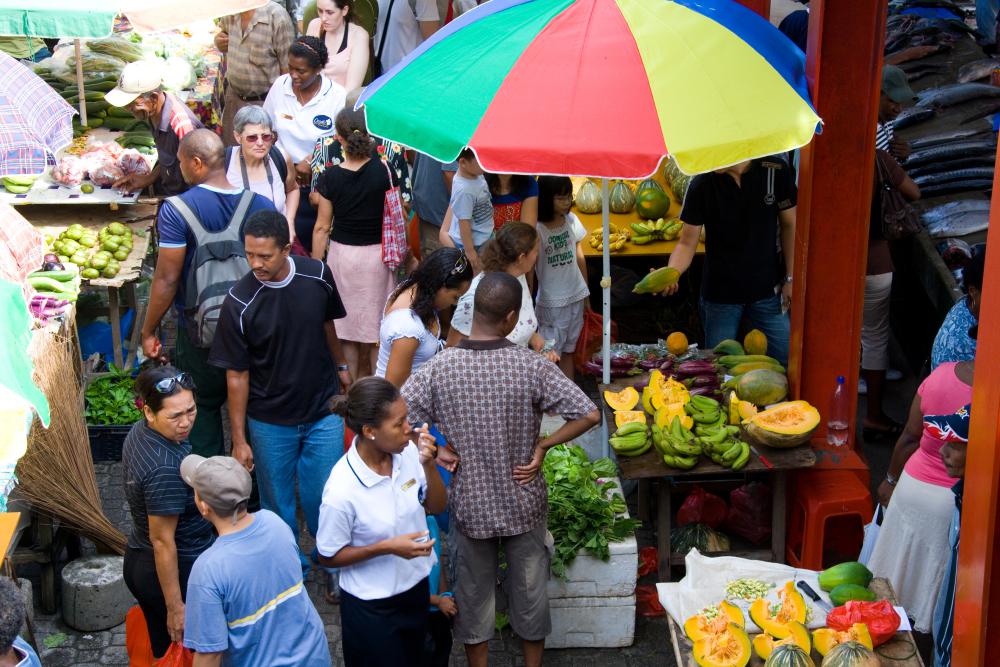 Sir Selwyn Selwyn Clarke Market in the capital of Victoria on Mahé is a vibrant mix of saris, umbrellas and fresh produce. Here you can buy anything from ladies fingers (edible green seed pods, which I tried here for the first time) to orchids as well as fruits and vegetables grown on small family farms. There are flower arrangements, packets filled with cardamon, aniseed, rolls of cinnamon and dried chilies ready to be made into a Creole curry, fresh seafood that was swimming a few hours ago and  cured fish, as well as trays of dirt-covered eggs. Lime green bottles of Creole Sauce with hand written labels leave the market the fastest. 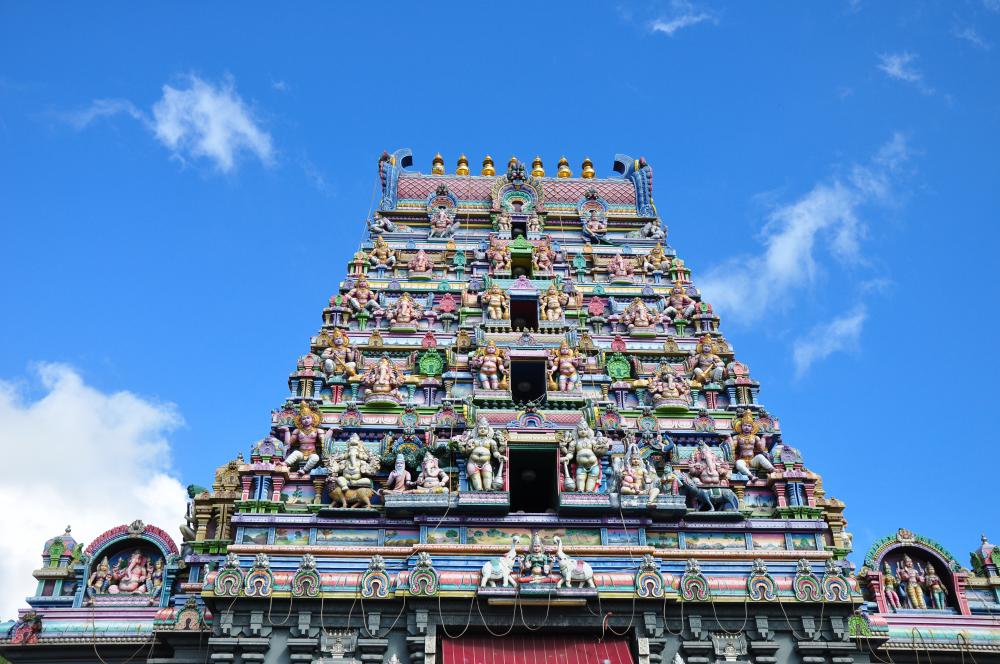 Across the street from the market, Arul Mihu Navasakthi Vinayagar Temple reaches for the sky with a backdrop of Three Brothers peaks. As the only Hindu temple in the Seychelles it is named after Lord Vinayagar, the Hindu god of prosperity and safety. At the entrance two men are preparing coconut shells filled with fruits that can be bought for 25 rupees as offerings to the gods.

3. Take to the water 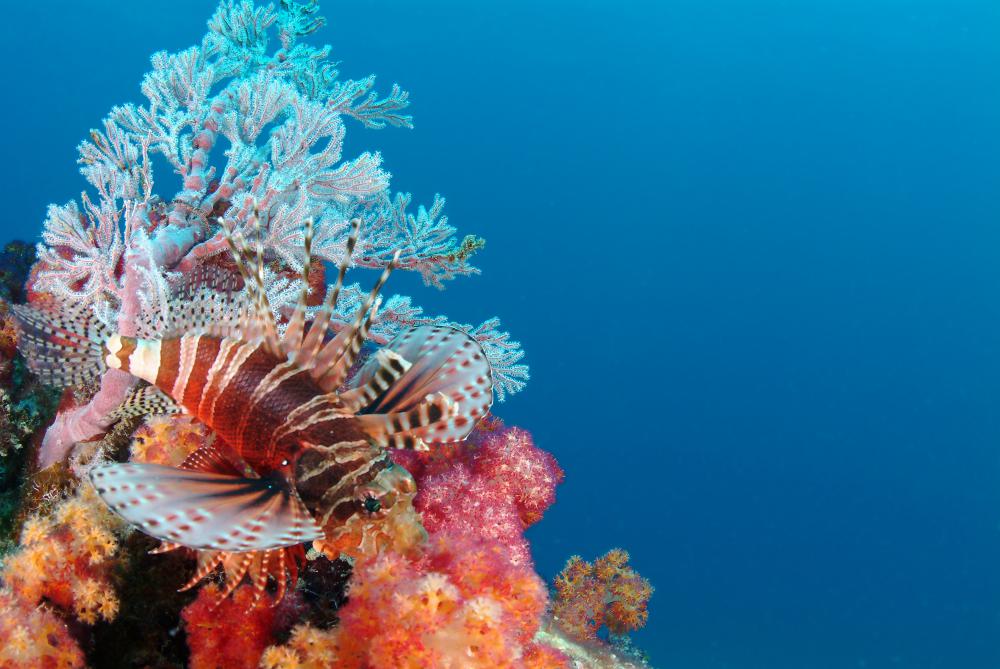 As you’d expect of any island that floats a few degrees south of the equator, life revolves around the turquoise waters of the ocean. Within an hour of doing my PADI Discover Scuba course with Big Blue Divers, we’re gliding through the giant tropical fish tank of Bay Ternay Marine Park. The waterscape enfolding us is filled with drifting Flutemouths, while rainbow Parrot fish eat pieces of coral and a shoal encircles us. Angel and Butterfly fish zoom between the fan and tree coral formations. The colours change from dark to light like a child’s twirling kaleidoscope. The good visibility and abundance of marine life makes snorkelling just as thrilling. 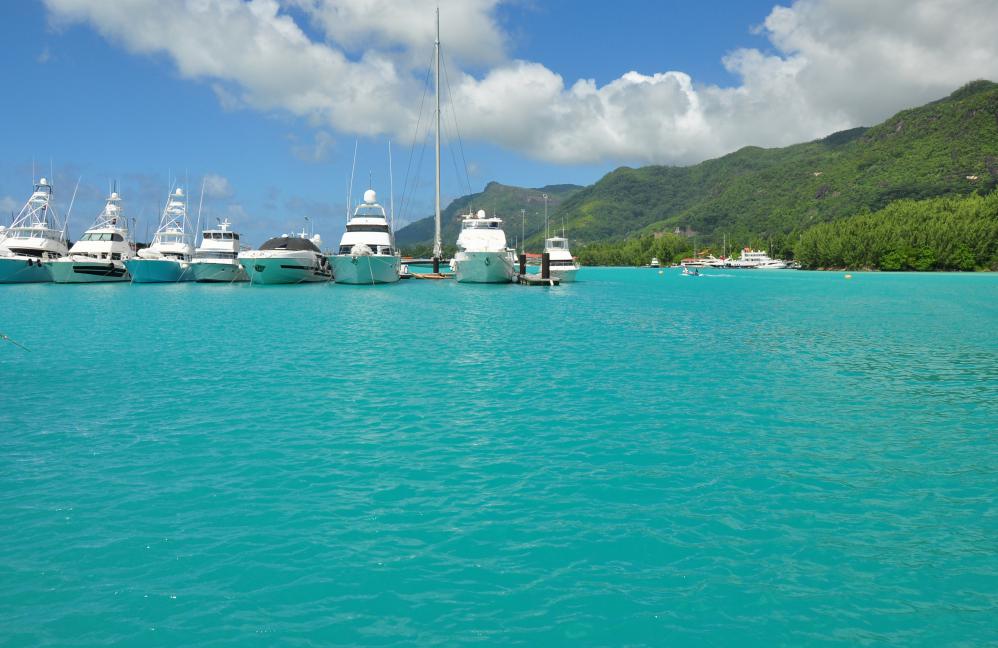 The Creole crab curry at Bravo Restaurant comes with views overlooking the bobbing yachts at Eden Island Marina. The tender meat is infused with salty Creole flavour. After observing my consternation at receiving a large crab and a few pincers (in my ignorance I was expecting chunks of crab meat enveloped in curry) my waitress approaches after a few minutes. “You have to suck the meat out,” she says demonstrating. “Don’t be shy to use your hands, that’s how we do it here. My grandmother still doesn’t like to use cutlery,” she tells me. “Food tastes better when you eat it with your hands.” I am grateful when a few minutes later she brings me a finger bowl, napkins and a crab cracker to accompany what is my most entertaining and longest meal yet. 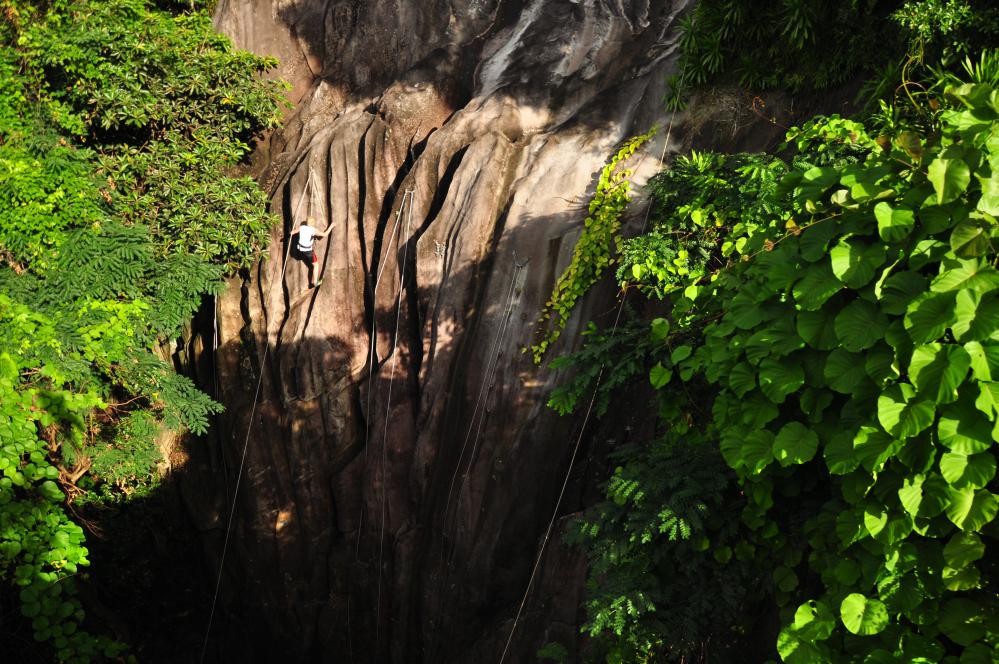 I fly over the virgin forest canopies between eight zip lines of different heights and lengths at Ephélia Resort with SMAC Adventures. From a lookout point my guide points out Port Launay Marine National Park below, “that’s where we’ll cool off with a Seybrew,” he says. But not before I dust my fingers with chalk and climb up the 18-metre high granite rocks. The five routes are colour-coded according to their difficulty. I fumble to find some of the crevices and finger holds (falling in love can’t always be easy), but reaching the summit is reward enough before I bounce my way down the rock face to take on the harder route. 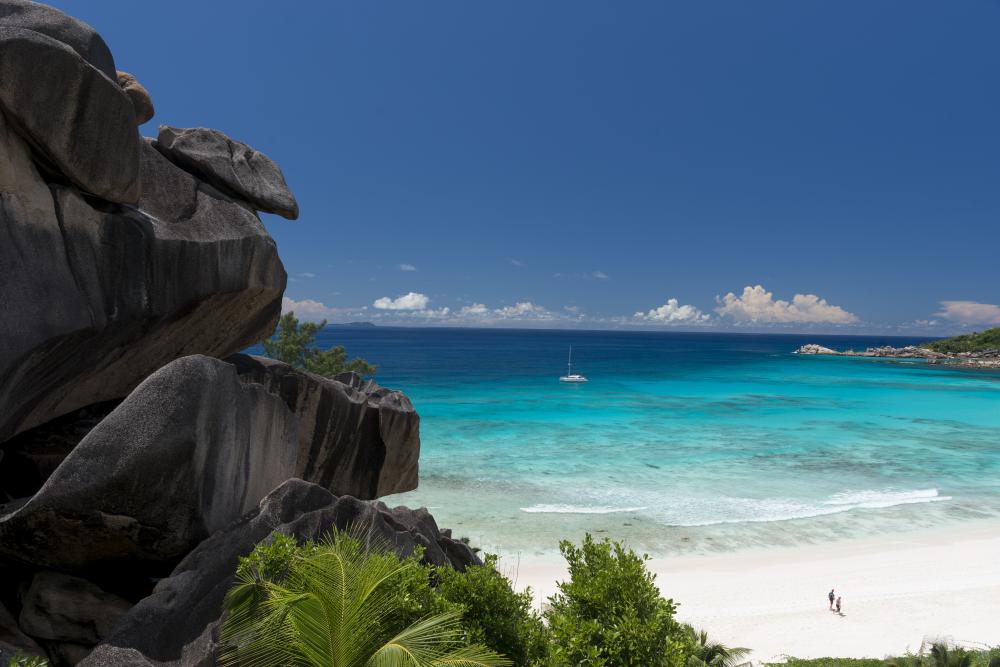 “People are so friendly on La Digue you’ll think everyone is hitting on you,” says my guide Marlon Panagary with a wink. La Digue is small at only 3km by 5km. It encapsulates the slowness of an island lifestyle. I spend the entire day on the saddle of a bicycle making my way from one beach to the next, before my swimming costume has enough time to dry. I pedal past cows in meadows, wooden hut “juice stops”, shrines to the Virgin Mary, farmers toiling the soil, beached fishing boats and people-less beaches. The downward sloping tar road turns to sand at the lake of water lilies at Grand Anse beach. Later I walk through the tropical forest over the boulders to its sister beach Petite Anse.

This. This is where I fell in love. La Digue makes me vow to return.

7. Swim with turtles while island hopping 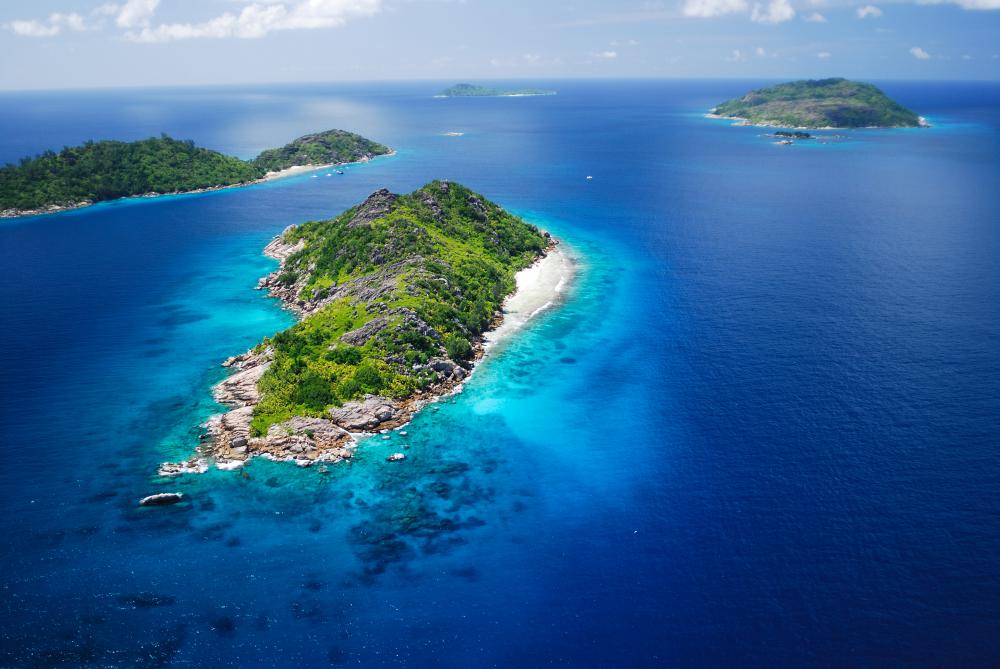 Praslin is a springboard for island-hopping expeditions with Creole Travel Services. It’s likely you’ll see hawksbill turtles as the Oplezir catamaran takes you to Felicite, Coco and Sister islands. While some people explore the beaches I spend most of my time encountering the cast of Finding Nemo as I snorkel between the coral reef and granite boulders. 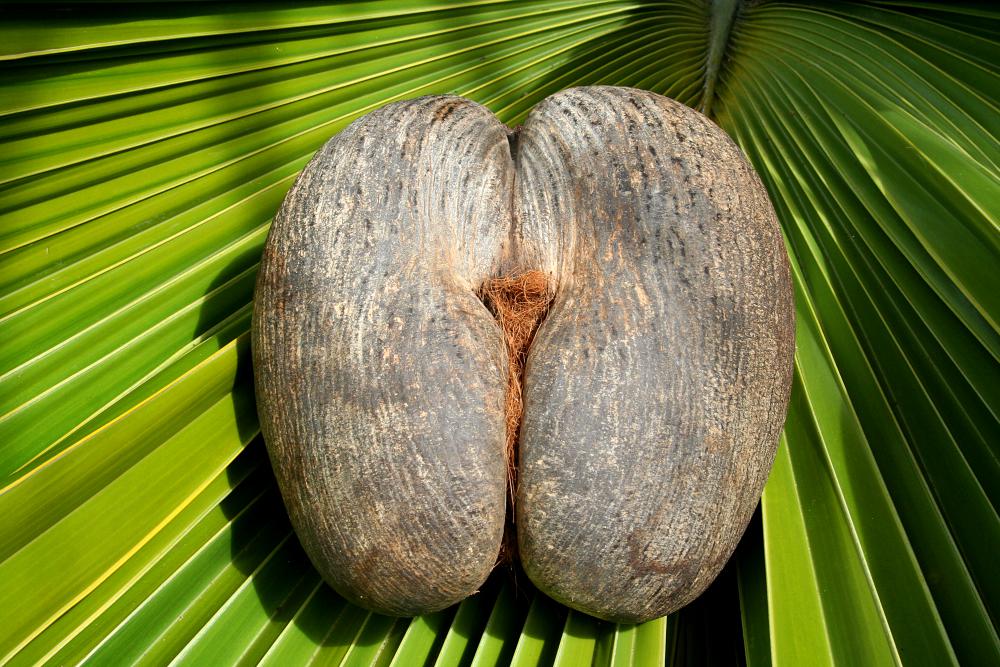 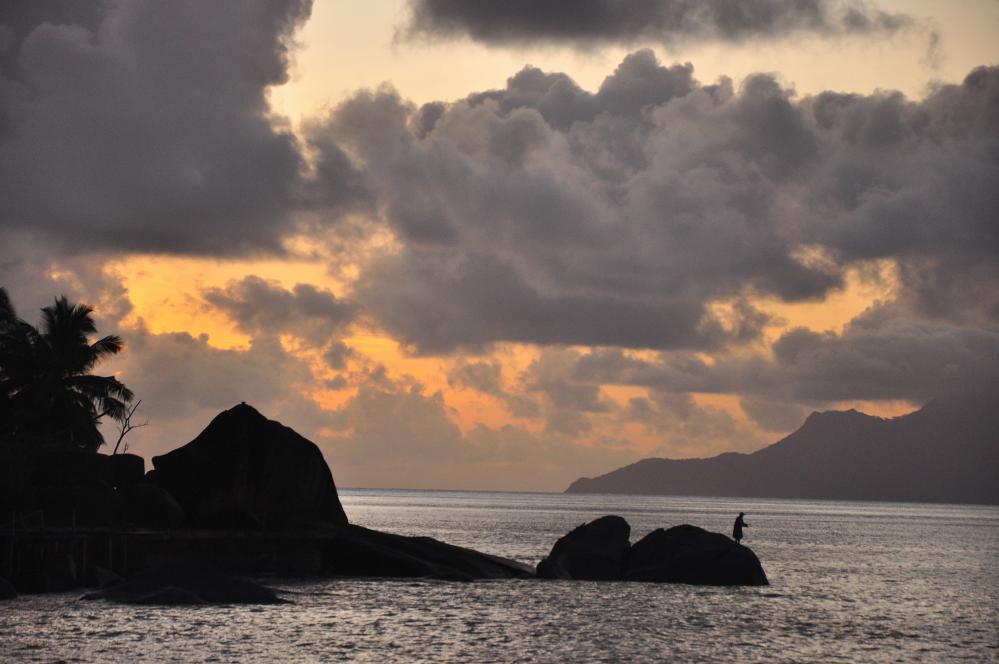 The Seychellois, who have a heritage of English, French, Indian and African ancestry, are warm-hearted and know how to savour important things like time. They know how to measure it, by fishing at sundown, seldom rushing and smiling often. Shortly after taking this photograph I walked past a man sitting with folded arms watching the sun melt into the water. I back tracked and sat next to him. After a few minutes we spoke. His house is the one just across the road, he points out, and he has been watching the sun set from this point everyday for the last 20 years (except for that time he was working as a cook on ships in South Africa). So we spark up a conversation about Durban and Nelson Mandela and he answers all my questions about life in paradise.

10. Sip on a sundowner from an infinity pool 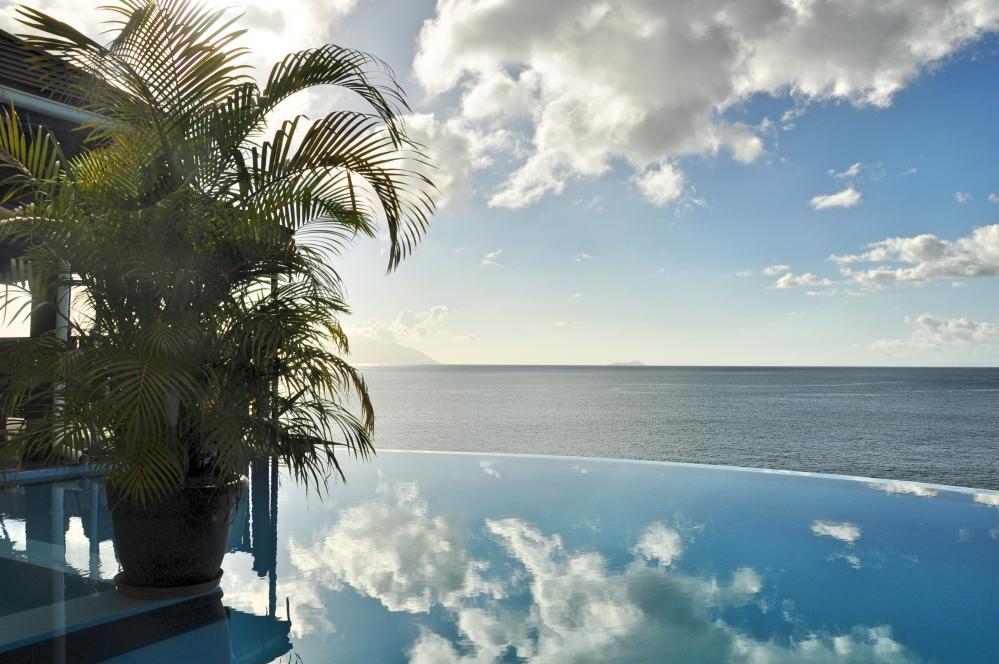 Takamaka Rum is the island’s most famous tipple and the base of most cocktails made on these shores and served at bars. So why not grab a mojito and sink into the infinity pool at Treasure Cove to watch the sun melt into the waters as you try to figure out when it was that you fell in love with the Seychelles.

Have you ever visited the Seychelles or had an island holiday? Where did you go? Please tell me all about it in the comments below.

Love it? Pin it for later! 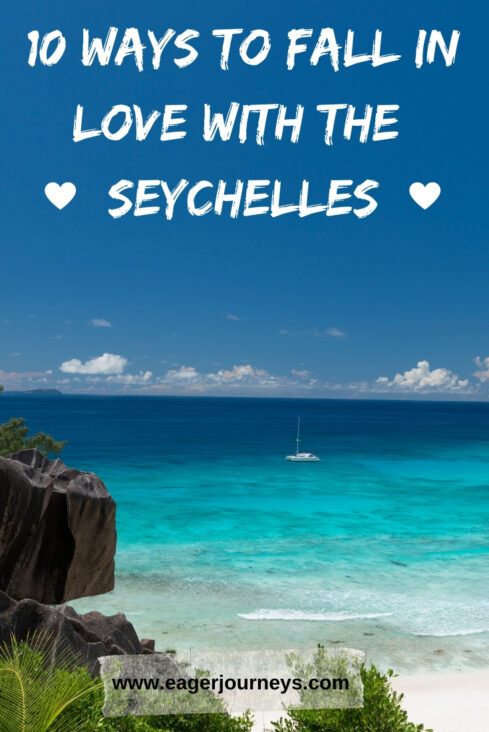 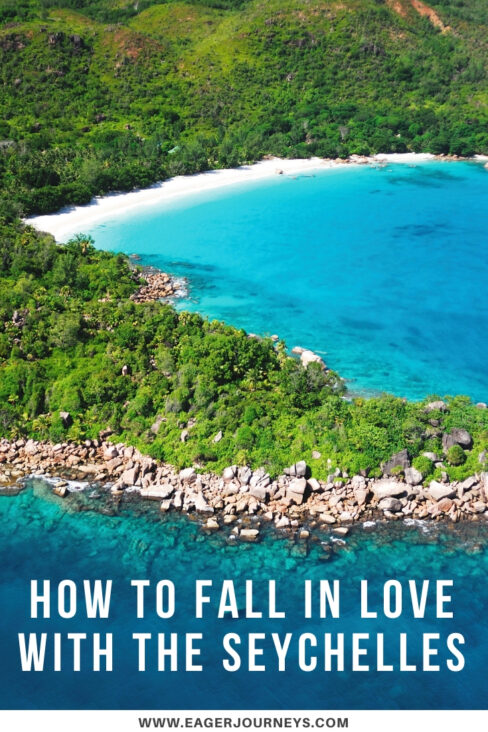