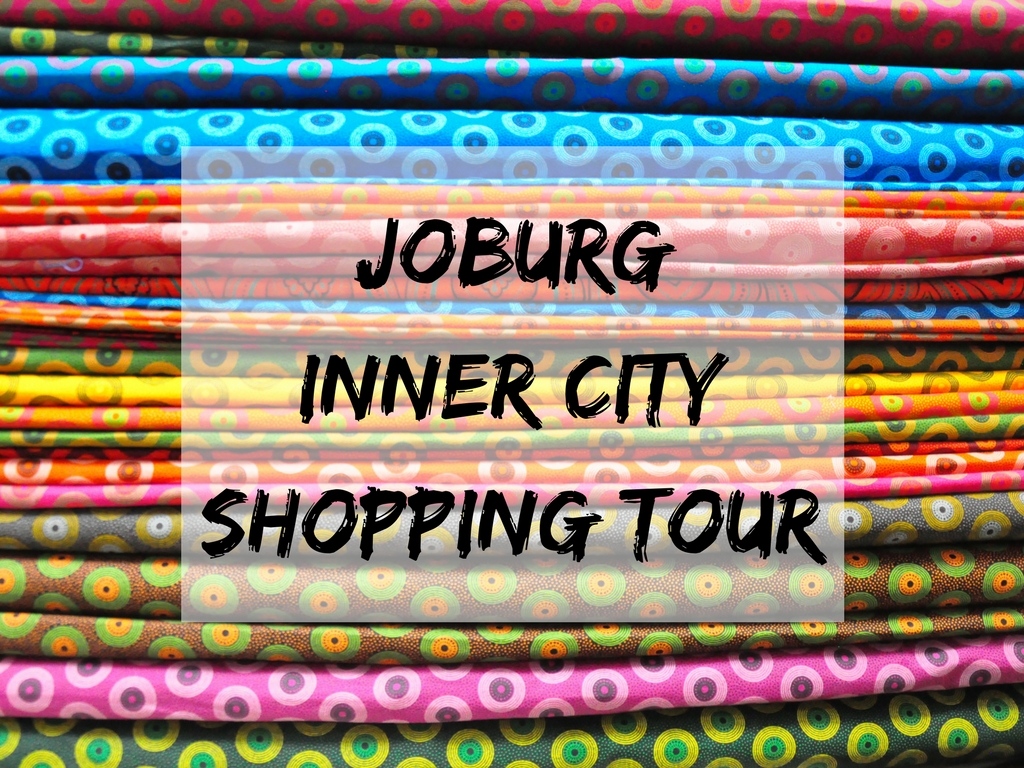 “We’ll meet many nationalities along the way,” says Jo Buitendach, founder of Past Experiences, as we start our Joburg inner city shopping tour from 1 Fox though the inner city of Johannesburg. Many of the people we meet along the way stop to hug Jo, provide her updates on their health, or share inside jokes. She knows their stories and has become part of their story. Jo is a friend they welcome into their communities.

I’ve known Jo for years, as we studied together at Wits University, but I’d only been on her graffiti walking tour, and it was time to do another, especially as I had heard so many awesome reviews of her Joburg inner city shopping tour.

We walk along Commissioner Street through Joburg’s original Chinatown, which was established in the early 20th century. By 1904 it was believed that there were around 180 Chinese businesses operating in the area. We make our way past Chinese diners (try Swallows Inn) and China marts that mostly sell party goods, trinkets, odds and ends.

Seventy-one-year-old Fatima Essop has had her shop here for 20-odd years. This is the place to buy everything from stick-on mustaches to utensils, stationery, socks and just about anything under the sun. This part of Ferreirasdorp has also become famous for the annual fireworks display during Lunar New Year celebrations, around February each year. 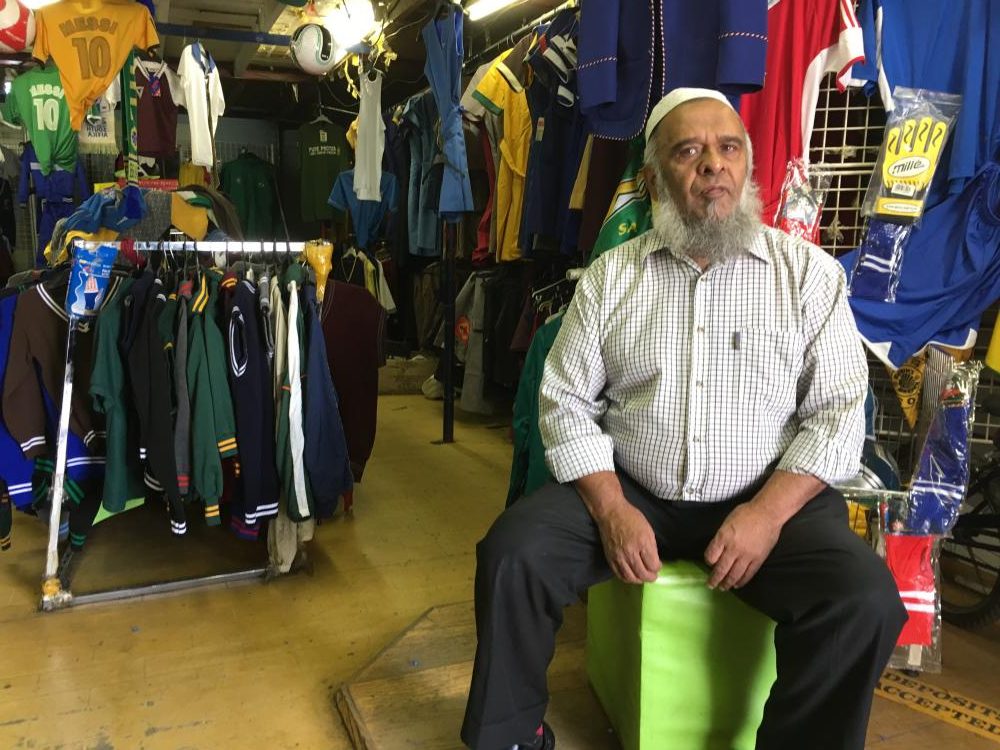 A few shops away we meet shop owner Hussein Bulbulia, another regular stop on the Joburg inner city shopping tour. He shows me what looks like an ordinary padded bar stool. At first I don’t believe him, but Jo confirms that it is indeed a chair from Nelson Mandela’s office, which was located nearby, and where Mandela ate his lunch almost on a daily basis. 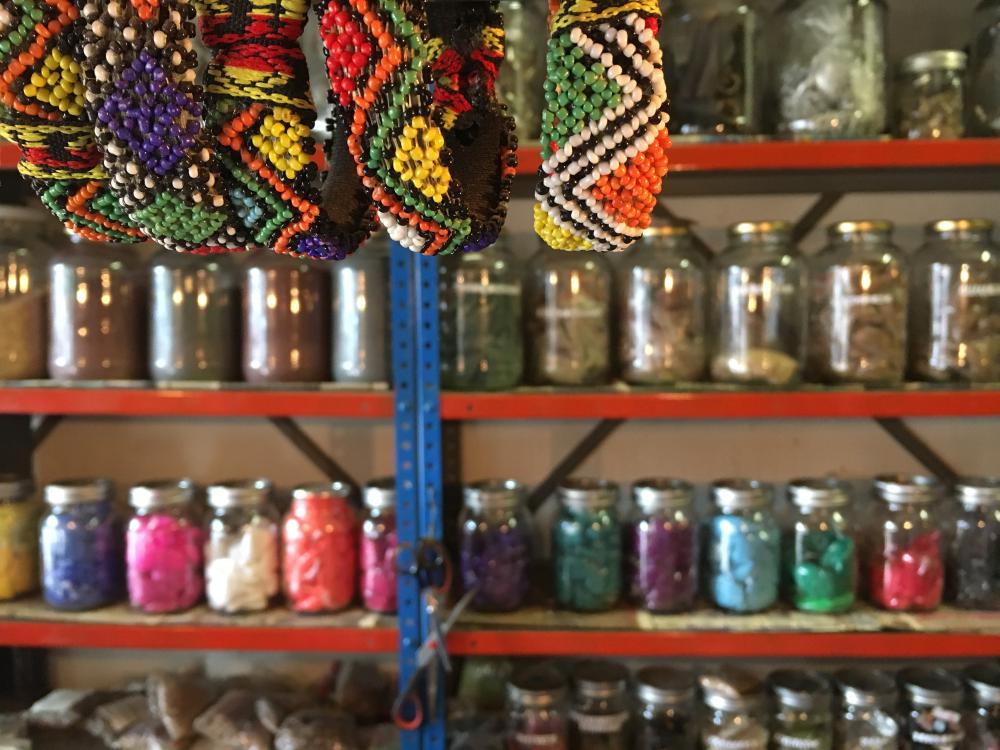 Most of the shops along Ntemi Piliso Street are family-run, Indian-owned, like Theo Naidu’s small traditional medicine shop, which sells herbal plants and roots with medicinal properties alongside talismans and other forms of traditional medicine. “Most Indians don’t believe in Western medicine, but rather in natural and herbal cures,” he tells us. It’s a hark back to the days before Big Pharma, when plants we used for their healing properties.

“Indians got into selling African traditional medicines through their forefathers, who came to work among Zulus on the sugar plantations in KwaZulu-Natal. They made their own stuff as they could not bring it in from India and also learned from the local Zulu people too,” says Naidu. 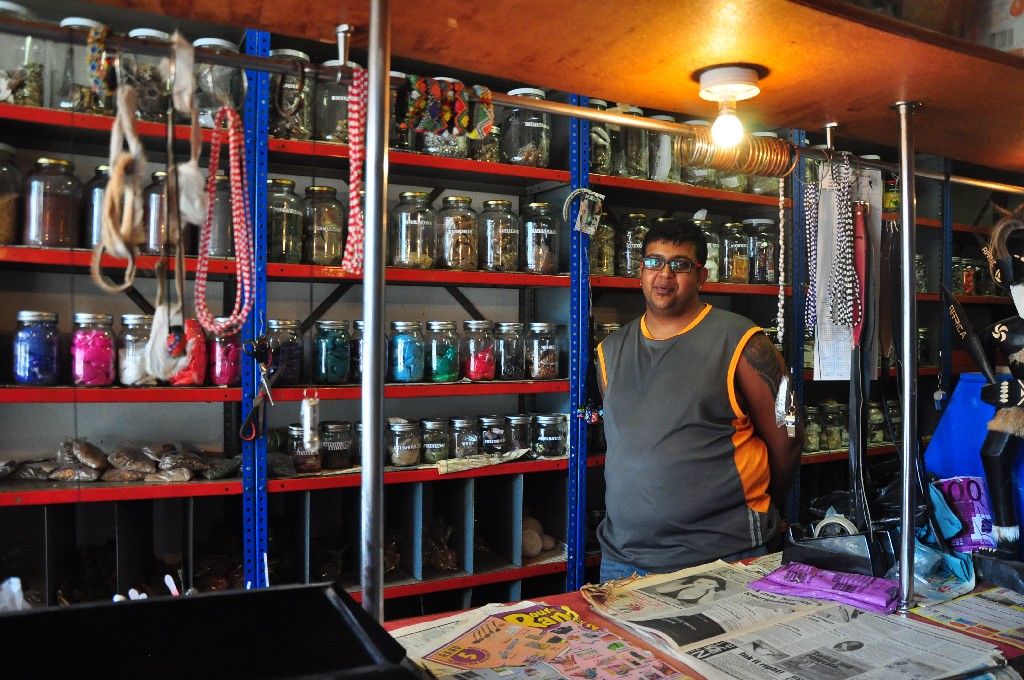 Many of the items he stocks can be found in your garden, in the veld or at the seaside. The latter have high calcium content and are often ground and added to other ingredients to help with heart disease or blocked arteries. He also makes a few of his own mixtures. One such mixture is intelezi, which is used to cleanse people’s aura and to help people heal spiritually, he explains.

I also spot the vibrant powders that are used in Holi celebrations, as well as coloured sulphur, which is mixed with either glycerine or water and applied on the skin for rashes. I point to the Love Drops I see on the shelf. “It’s business, I have to cater to everybody,” he laughs. 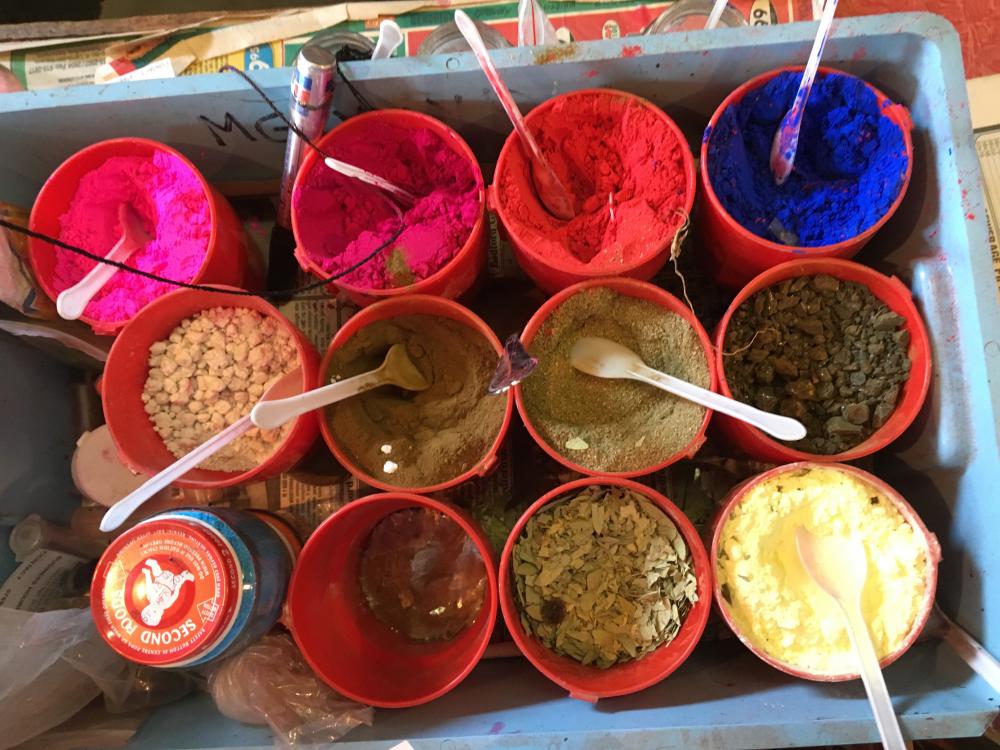 This area is on the original edge of Johannesburg, which ended at Diagonal Street, says Jo. “Apartheid might have formally started in 1948 (though I believe it started when South Africa was first colonised), but when the city was established in 1886 it was created along racial lines.” She points to the Indian and Chinese sections of town.

“Normally non-white areas were forcibly removed, like District Six, for example, but this area was never touched, my reasoning for this was that there a large influx of labourers to Newtown who were living in compounds and needed somewhere to shop,” she explains. They have been here for decades.

At Minty’s (34 Market Street), I buy five metres of Dutch Wax fabric, which has become synonymous with West African fashion since the late 19th century, and has made its way south to the tip of the continent too. “Because the city is changing, the fabric is changing,” explains Jo. Today, it’s an important part of African women’s identity. I could have spent another hour here, easily. This was the real reason I was so excited about her Joburg inner city shopping tour. I’m going to have a seamstress make dresses and skirts from this colourful and illustrated fabric I bought, but you can also find a number of accessories and fashion items made from Dutch Wax in Maboneng. 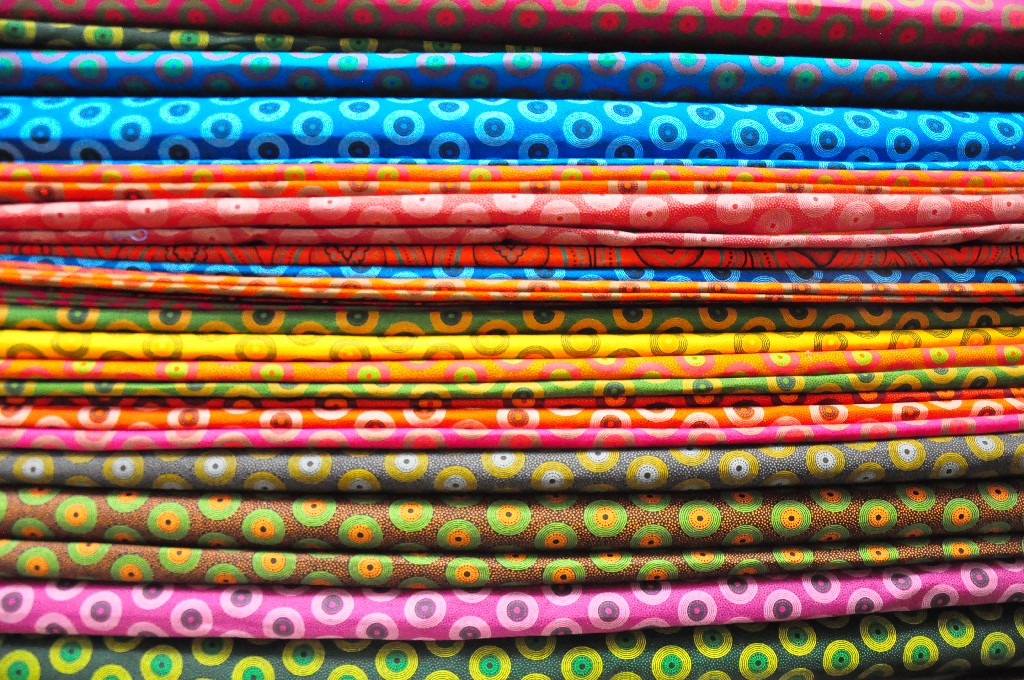 While here, Jo told me more about Ishweshwe (sometimes also called Shoeshoe) fabric. It was brought to South Africa by ship by European missionaries. By the time it had arrived, after months at sea, more often than not, it had disintegrated, which is why they started to starch the fabric. And so today the Ishweshwe that’s produced locally is not starched for purpose, but rather for the sake of history and just because that’s how it was always done. Expect to pay about R50/metre for the authentic, thicker kind, and around R12/metre for the generic, thinner brands, with some others in the mid price range.

There’s even a book with all the various Ishweshwe patterns. Brides give their guests the number of their chosen pattern and each wedding guest should wear a piece of the fabric or incorporates it into their outfit. Jo also shows me fabrics worn by the Shangaan and Pedi people, as well as the Ndebele rainbow prints, and the fabric that’s preferred by Sangomas (traditional healers). 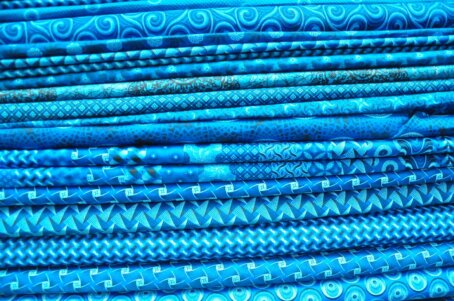 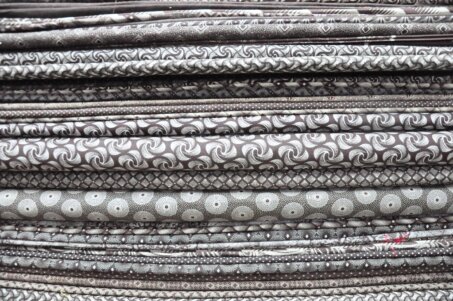 All of Jo’s tours (like this Joburg inner city shopping tour) can be tailor-made according to your interests, be sure to check out her budget weekend tours for locals on her Facebook page. We end ours in the Ethiopian shops at the multi-storey Medical Arts Building. Metal crosses hang from the ceiling, cup and saucer sets line the shelves alongside Ethiopian coffee and a red and white print of the rock-hewn church of Saint George at Lalibela hangs behind the till.

The restaurants serve a bayenetu vegetable platter with injera, a sourdough pancake, as well as slivers of raw beef that are served with bowls of chilli powder. From our table on the balcony Jo points out that the Ethiopian Quarter stretches for a few blocks along Jeppe Street. 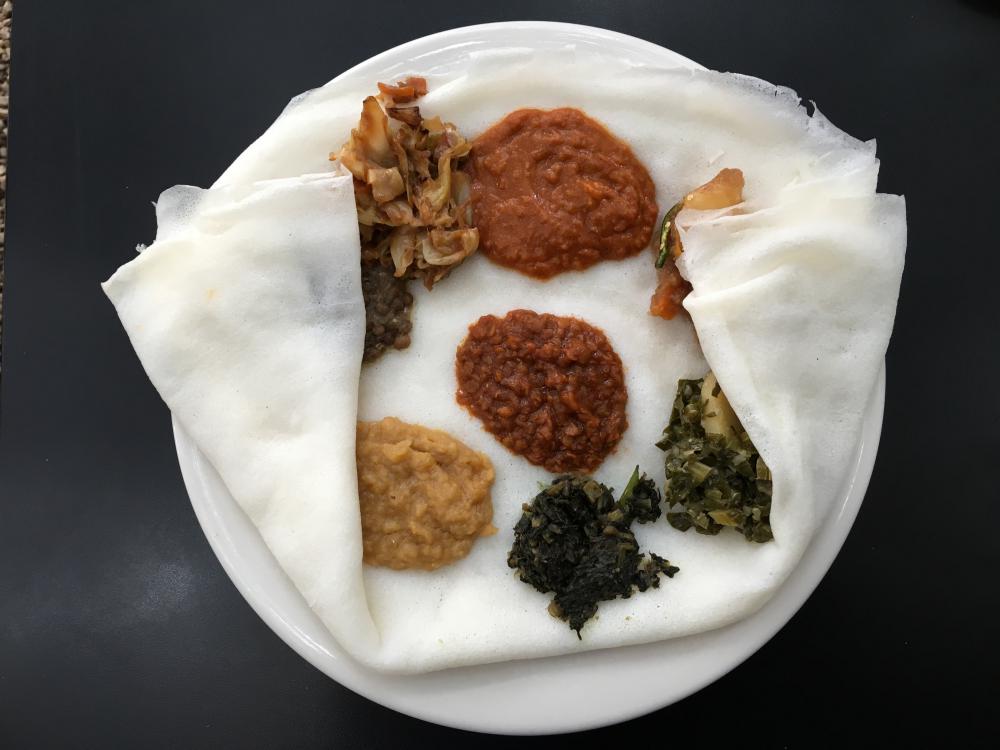 When we ask our waiter, Josef, about his homeland, he proudly flips through his phone to show us some of the many places he recommends we visit. As he speaks about home, there’s a slight sadness in his voice: he hasn’t seen his family in five years, he says. Flights home are beyond his means. Suddenly I am reminded of the great sacrifice some people make when they uproot themselves and journey great distances to start life afresh. Just as my parents did, nearly 30 years ago.

If you liked this post about Joburg’s inner-city shopping tours, pin it for later. 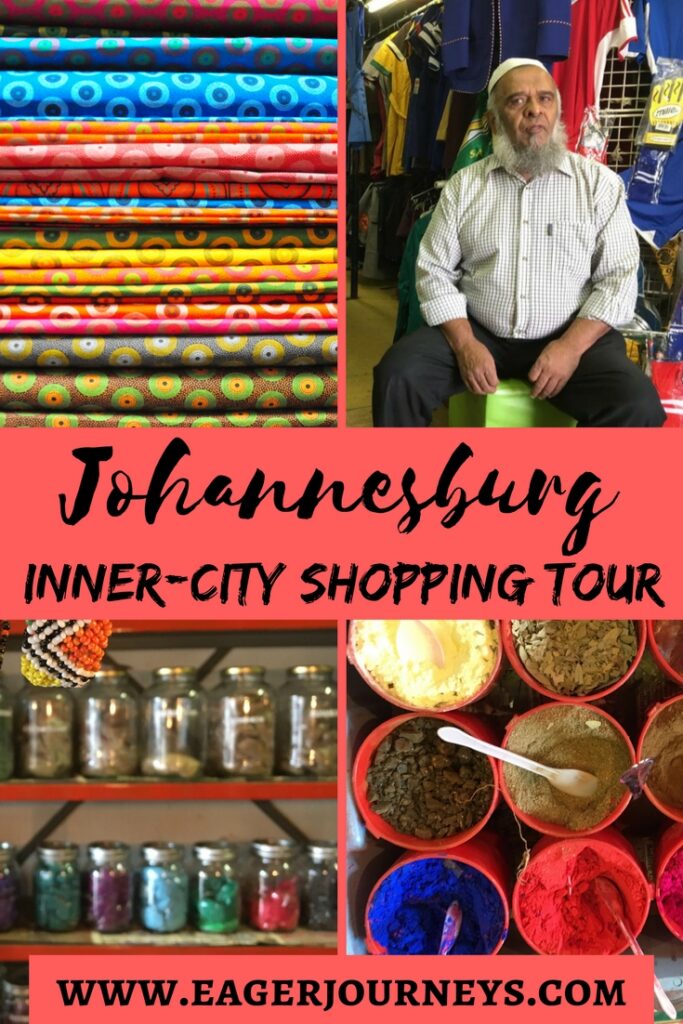 This Past Experiences Joburg inner city shopping tour, which was tailored to my interests, was complimentary, however all opinions are my own, but you already know that. ;) I wrote this article as part of my freelance work.