Home Africa Windhoek and its Incongruities

Windhoek and its Incongruities

Now I can say that I’ve visited one of the most sparsely populated countries in the world. Country number 22 on my travel list was Namibia: the 34th largest country, which only boasts a population of 2.32 million.

The former German colony was mandated to South Africa in 1919, after Germany was defeated in the Second World War, and gained independence on March 21, 1990. German television programmes from bygone days are aired as Saturday morning entertainment and Afrikaans is spoken on the streets. To this day, only around seven percent of Namibians speak English, which is the ‘official’ language, while ‘Namlish’ closely resembles South African English.

The south-west African nation has consistently been ranked as one of the highest ranking African country in terms of press freedom — according to the Reporters Without Borders Press Freedom Index. Yet, the street names in the capital city of this multi-party democracy are something of an incongruity: Nelson Mandela drive intersects with Robert Mugabe Avenue and Christus Kirche (church) is nestled atop Fidel Castro Street. 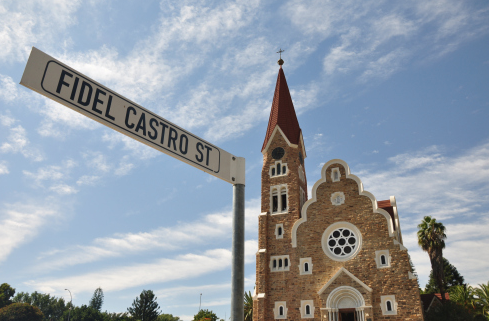 While I was only in Namibia for a few days, in the future I hope to follow in the tyre tracks of Roxanne Reid, a fellow travel blogger who has travelled through Namibia extensively and written about it too. If you’re looking for some destination inspiration, here she writes about her stay at the Spitzkoppe Campsite in the Namib Desert.