I am visiting two very dear friends, Christina and Matthias, who live in central Vienna (or Wien in German). It’s my first time in Austria and I’ll be here for 11 days. Afterwards I’ll be heading to the university city and UNESCO World Heritage centre of Graz, and a trip to Mozart’s birthplace in Salzburg.

If you’re only in Wien for a day, here are my recommendations. First thing in the morning, we visited Schloss Schonbrunn. The palace has been home to the Habsburg lineage for centuries and a not-to-be-missed sight when in the capital city. The UNESCO World Heritage Site was established as a hunting lodge for Emporer Maximillian and his entourage, later it was converted into the summer residence. As you would expect of a palace, the interior is ornately decorated. The extensive palace grounds are known for their labyrinths, fountains, fish ponds and even a constructed Roman ‘ruin’. But the gardens’ best known feature is undoubtedly the Gloriette – this pavilion was used as a dining hall and for banquets. Franz Joseph I particularly enjoyed taking breakfast there.  This photograph was taken from the Gloriette.

You can read some more destination inspiration on where to take awesome photos in Vienna: here. 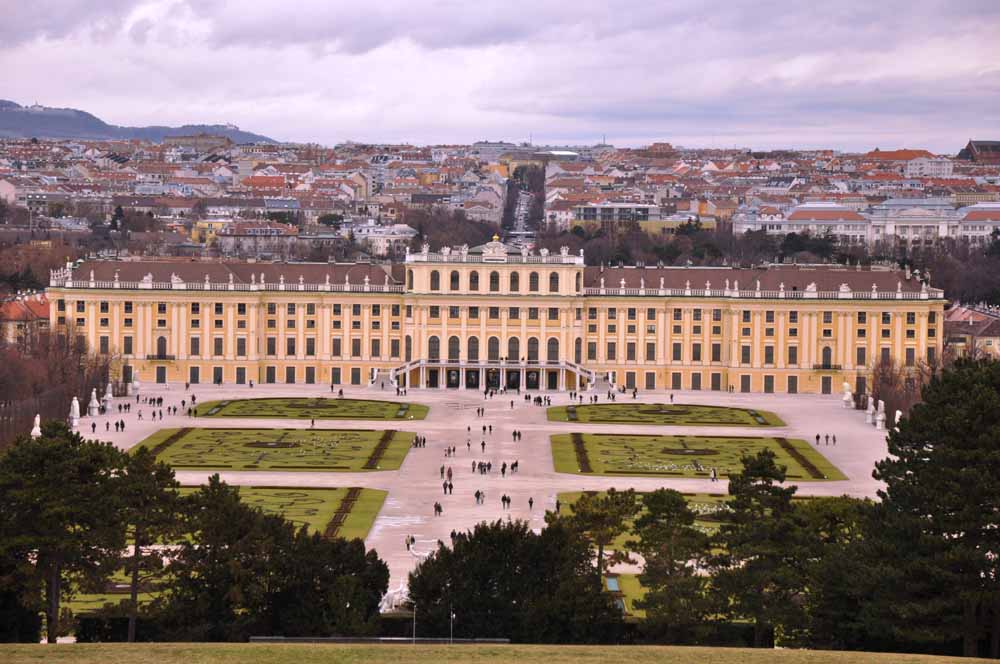 Catch the subway from the station just outside the palace to central Wien and take a pre-lunch walk along Ring strasse. Ring Street, as it is also known, is lined with shopping galleries and flagship fashion outlets, as well as administrative and judicial buildings, which are rather fascinating in terms of their modern architecture and design. There are many restaurants and fast food spots along Ring strasse. Take your pick from traditional Austrian cuisine – chicken schnitzel, wurst or Austrian goulash with dumplings to name a few of the most popular dishes – to internaiontal restaurants. If you’re counting Euro cents then walk away from the central area for cheaper options.

After lunch we ascended St. Stephen’s Cathedral southern tower. The mosaic roof was particularly fascinating, especially as seen from the top. Wien offers countless splendid panoramic views from its numerous towers, buildings, viewpoints and even merry-go-rounds. What intrigued me most about the views from St. Stephen’s Cathedral is the juxtaposition between the older and newer buildings, which is easier to observe from above. 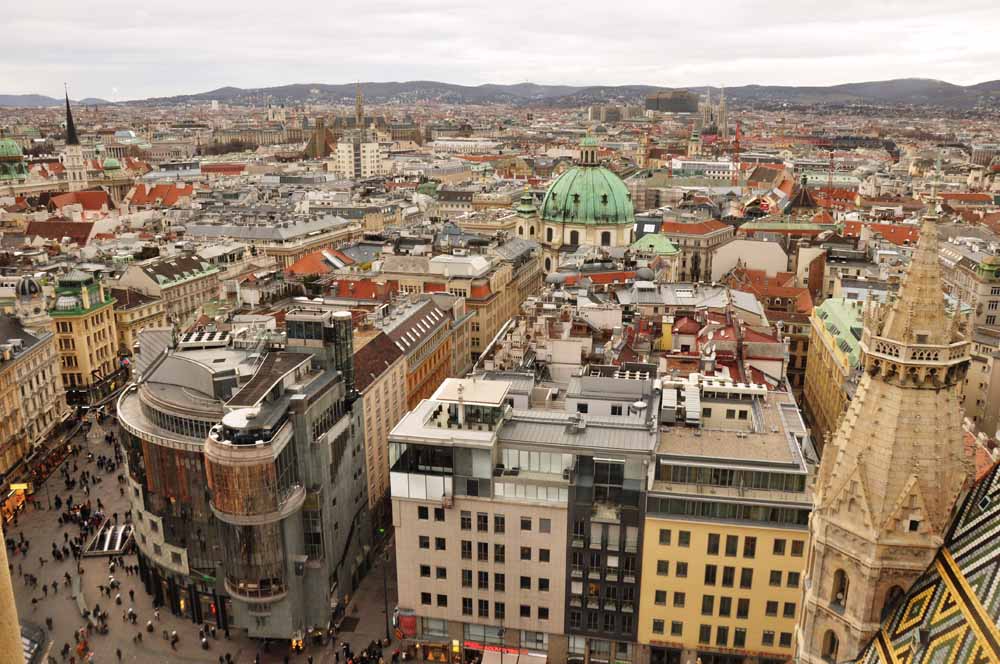 Before the sun set we walked along the Blue Danube (you surely know the Blue Danube Waltz by Austrian composer Johann Strauss II) and past Vienna International Centre (read that post if you more than 24 hours and would like to visit the United National headquarters). Near the riverbank is Donauturm Tower and its revolving restaurant – perfect for a cuppa with a view or a romantic dinner. Before the wind blew us indoors, I managed to snap a few photographs from the restaurant’s terrace. This panorama is stitched together using eight RAW photographs. Please click on the image to enlarge it and zoom in to see greater details.

Have you been to Vienna? What would you add to this itinerary? Please tell me in the comments below.