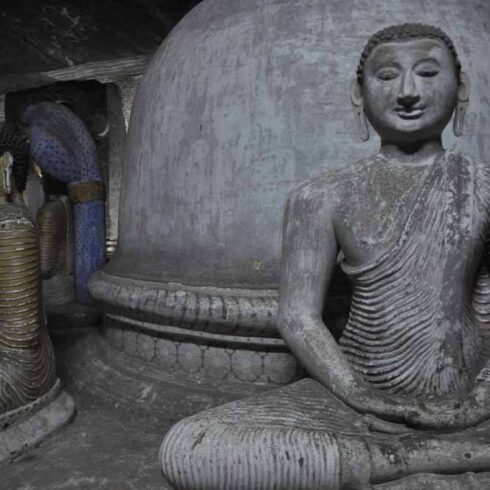 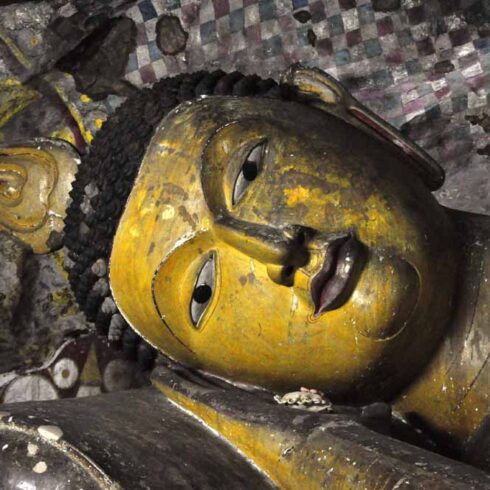 The Dambulla Cave Temples are best explored during Poya – the full moon festival celebrated each month by Buddhists throughout Sri Lanka. The majority of Sri Lankans are Buddhist and follow a lunar calendar. The day of the full moon is a national, public holiday and allows pious pilgrims to worship and give offerings at their temple of choice. Those who are not Buddhist are given the opportunity to relax from the heat. Many, Buddhists and non Buddhists, still choose to continue business as usual, however the sale of alcohol and meat is forbidden on these days. Some may visit the temple after working hours and once the heat has subsided. The caves remain open until 9pm during the Poya Festival. Believers light oil candles and lamps, offer thanks for the blessings they have received and pray for further guidance and protection. They offer flowers (mostly lavender), their scent fills the small caves, which makes you almost forget that you’re within a cave carved into rock. The generous offerings of fruit are placed on brightly coloured, handmade mats. 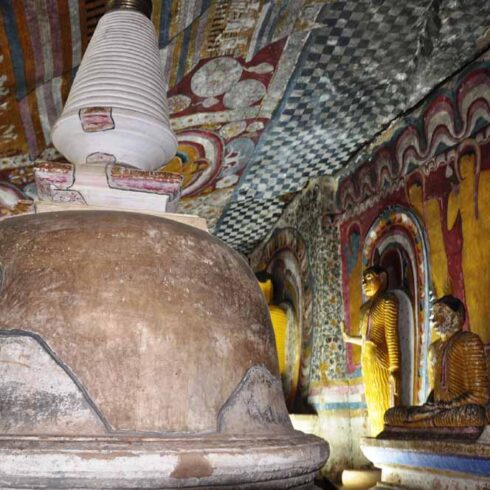 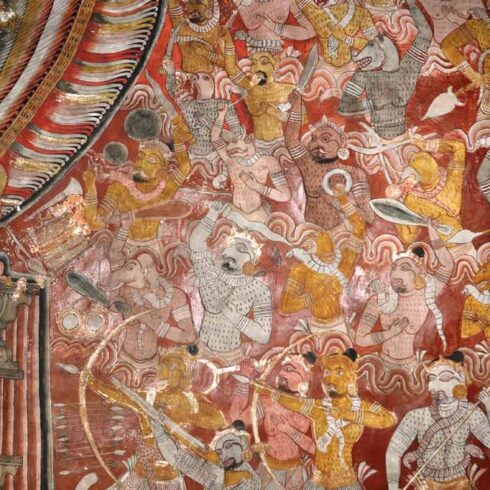 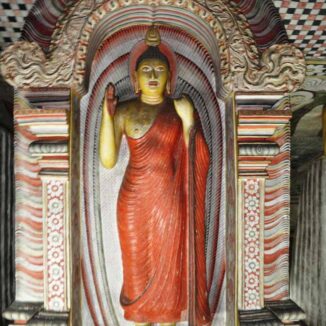 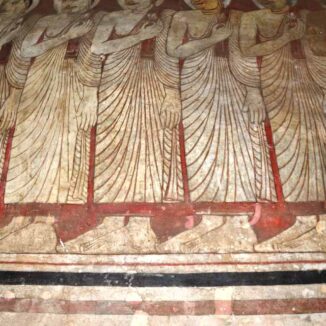 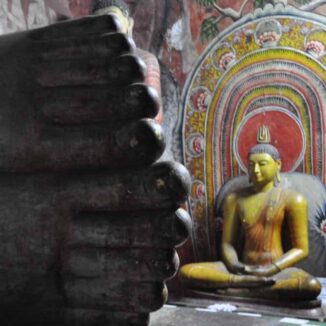 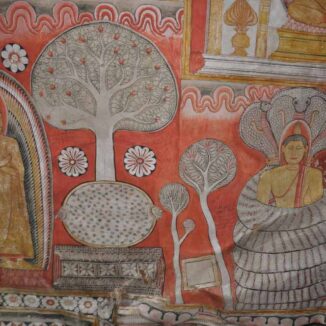 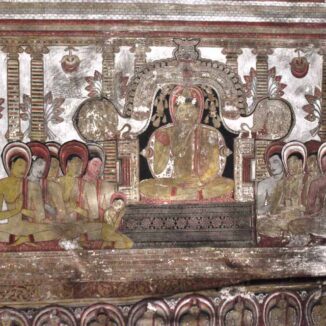 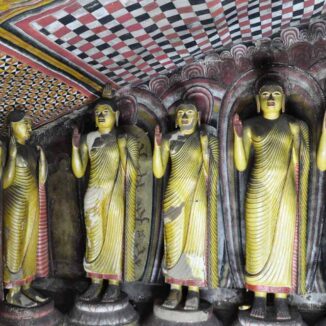 The Dambulla Cave complex consists of five caves, four are natural and the other is man-made. They date back from the 3rd century BC until the 1920s. The caves contain 153 statues of Buddha in varying poses. The resting reclining Buddha and the meditation pose Buddha are the most common. They were commissioned by different kings, hence the materials used to make them differ according to each period. Some are made from granite or wood (predominantly teak and mahogany), while others (those from the 20th century) are made from cement. The caves also house statues of the most prominent kings of Sri Lanka and a few statues of Hindu gods, this is because some kings were married to Hindu princesses. This was a strategic move to sustain peaceful relations with their neighbours.

My knowledgeable guide explained the importance of the eye painting ceremony of a Buddha statue, which is only ‘brought to life’ – or considered to be a god – after the auspicious eye painting ceremony. The painter is not allowed to look directly at the eyes as he paints them. This makes the process more challenging than merely having to paint the most important aspect of the statue. Instead, he needs to paint the eyes by looking at their carved reflection through a mirror. He cannot do so on any random day either. There is a specifically designated day for this occasion, which is decided by astrologers, who study the heavens for a sign as to when the ritual will be most advantageous.

I met two grinning boys, who are studying to become Buddhist monks. They were 11 and 12 years old and were up to no good that night. They also provided me with a trapeze show as they balanced their way across the metal railings leading to the entrance of the cave complex. 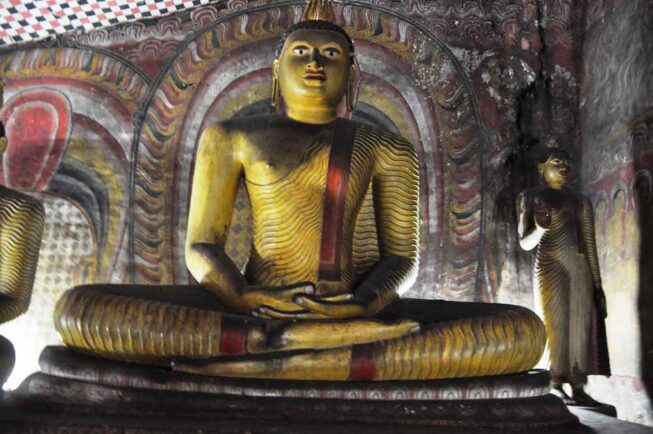 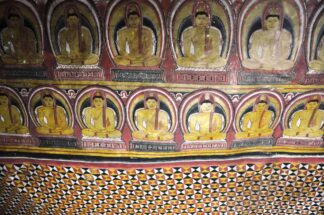 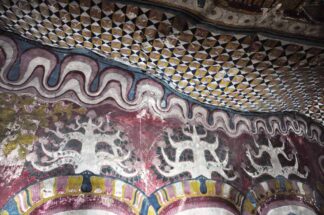 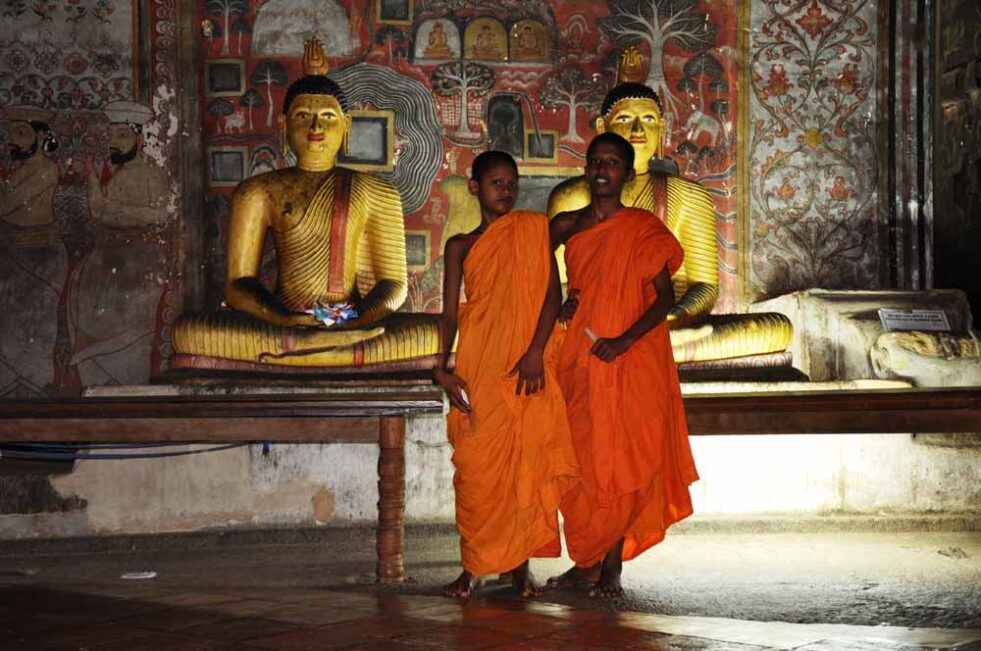