Home Africa In search of moonbows at Victoria Falls, Zimbabwe

In search of moonbows at Victoria Falls, Zimbabwe

When you plan your trip to the mighty Zambezi River and Victoria Falls with Africa Odyssey be sure to do so during the full moon, so you can go in search of elusive moonbows. 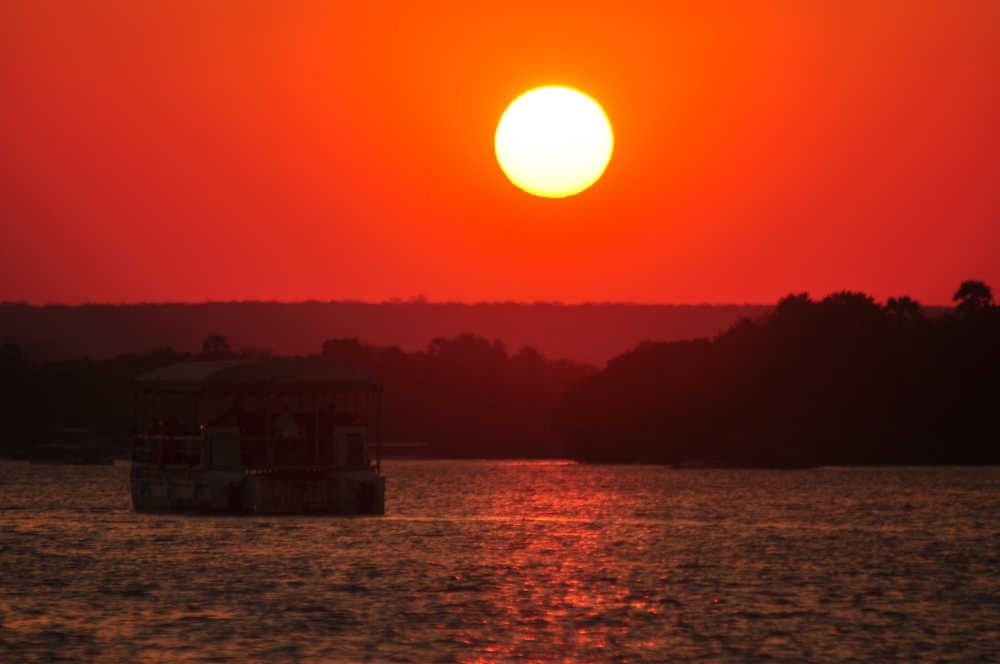 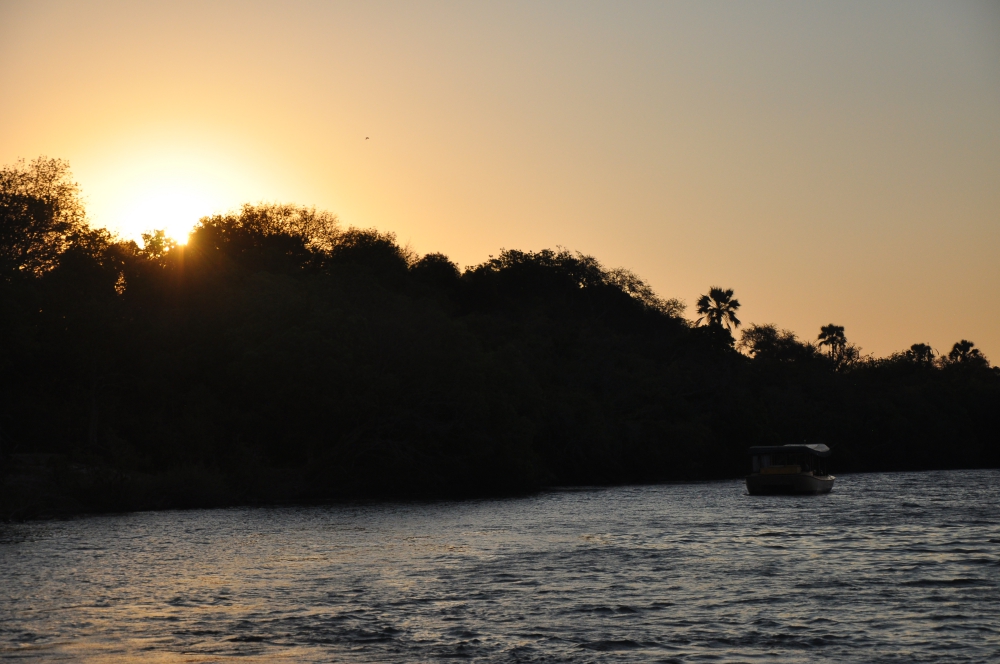 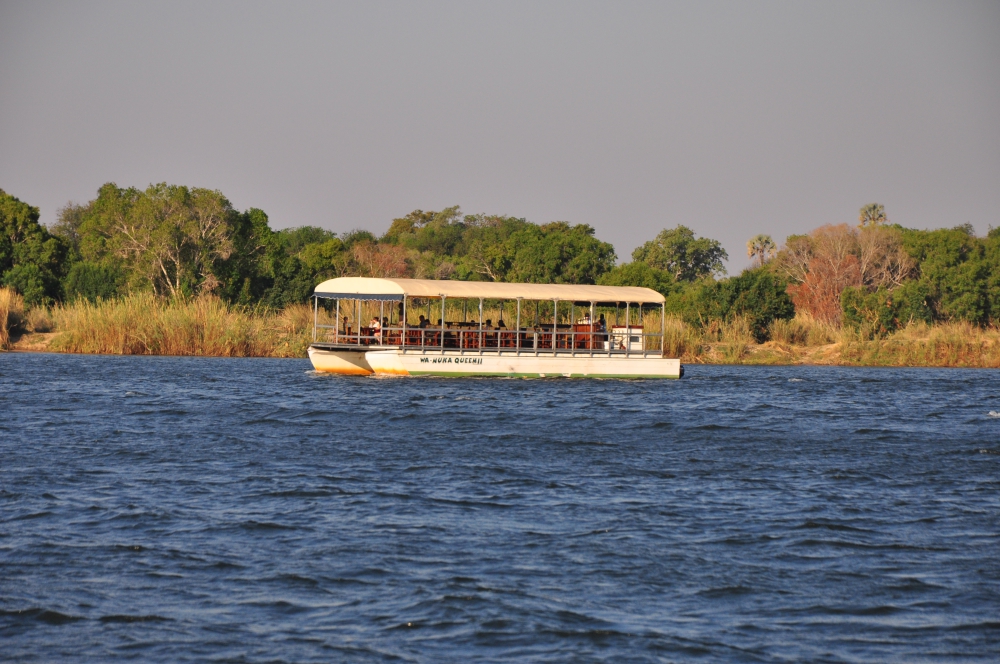 We clink our G&Ts to the setting sun on a sundowners cruise along the Zambezi River. The elephants have crossed the breadth of the river, the birds have finished singing their lullabies. Everything seems to lay still for a few moments, while the moon dresses herself in a golden gown and prepares to gracefully emerge from the water. Everything but the Zambezi that is, which continues to reverberate as 500 million litres tumble over the basalt cliff into Batoka Gorge each minute. Mosi-oa-Tunya, the locals call it, the smoke that thunders. In the stillness of the night its might is magnified. Then Victoria Falls awakens with nocturnal life.

As we approach the world’s largest waterfall from a distance, it’s too dark to see the mist that’s always suspended above it. But once we are close enough, I see it dance above the gorge before it gently descends on me like a cloak of fine droplets. 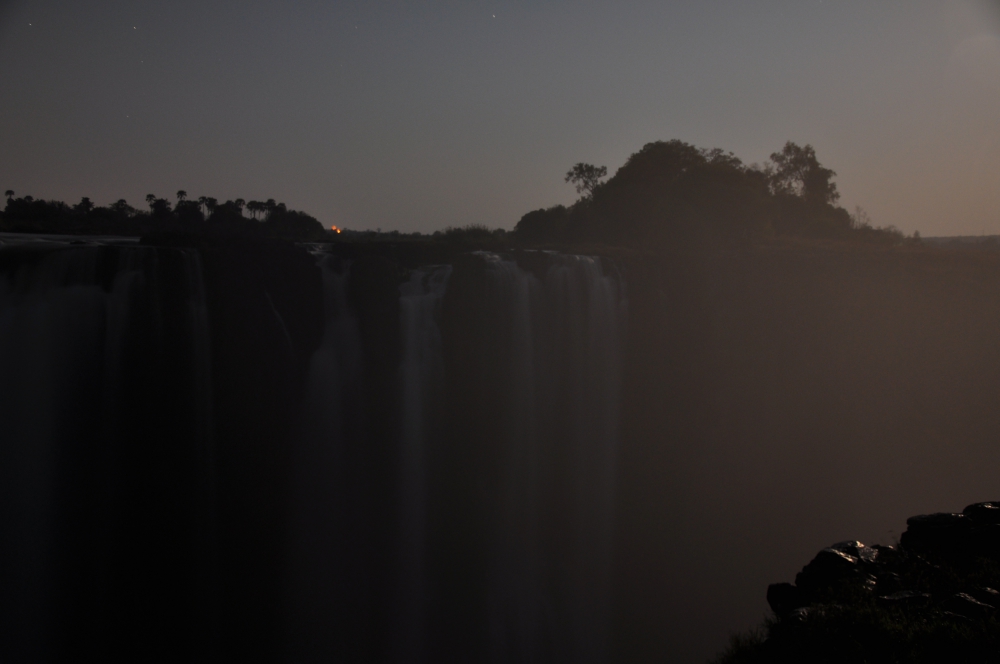 We’re on a two-hour nocturnal hunt for moonbows, or lunar rainbows, in Victoria Falls National Park on the Zimbabwean side of this natural wonder. Aristotle first scribbled his observations about moonbows in his writings on meteorology around 350BC. Yet to this day moonbows haven’t received as much attention as their day-time counterparts. Probably as they are much more elusive than rainbows. But that’s exactly what makes this adventure so thrilling. And different.

Moonbows occur when light reflected from the moon is refracted by water particles suspended in the air. They are much fainter than rainbows though due to the smaller amount of reflected light. It’s also harder to distinguish the colours of a moonbow because the moon’s light is usually too dim to excite the eye’s cone colour receptors, so they may appear washed-out or white in colour. 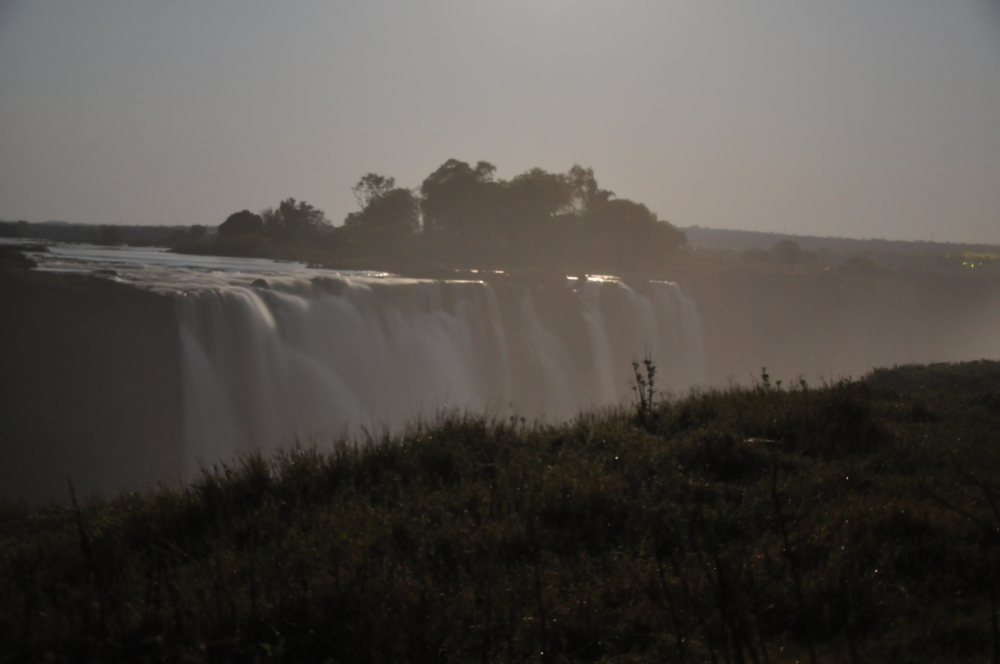 Your chances of seeing this magical apparition are best on a cloudless night when the moon is at its brightest – the day before, the day of, and the day after a full moon – which is when the evening tours are held. And especially during the wet season, when the plume of mist is at its biggest and most animated.

We walk through the rainforest, that’s heavy with water drops, along the park’s demarcated stops and viewpoints. But we’re heading in the opposite direction to the daytime tours, from end to start. Though dark, it’s virtually impossible to get lost even at night, as one park guide leads and another falls behind to collect the straddlers. So I’m not quiet sure how we managed it, though we must have been stealthy as we hurried along the drenched pathways with our tripods in search of the perfect long-exposure photograph. 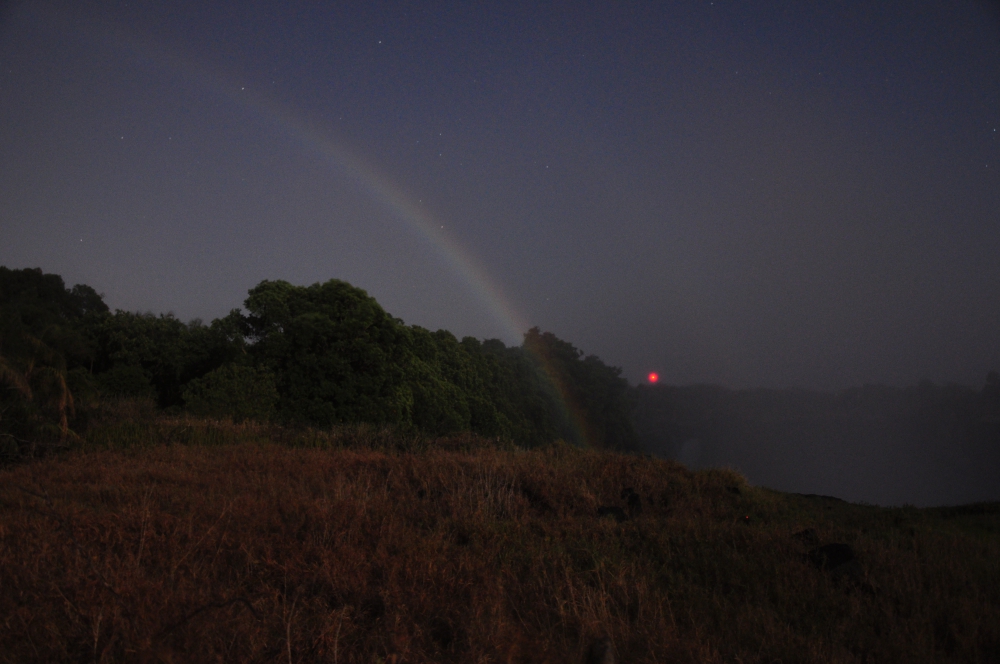 This night-time spectacle is best witnessed in the hours of the evening, soon after moonrise and before its too high above our heads. We turn our backs on the moon, to block out its bright light, as we search for glimpses of colour. And there she is: a double moonbow standing in the tall grass and arching towards the rainforest. As the hands of the clock sweep across the clock face the moonbows climb deeper and deeper into the depths of the gorge before disappearing from sight until next month.

There’s always the debate about whether to see Victoria Falls from the Zimbabwean side – where you can walk along two-thirds of the waterfalls’ length – or from the Zambian side – where you can almost look through the entire length of the gorge. Then there’s the question of whether to visit during the wet season (April and July) or dry (August to December) season. The chances of seeing moonbows are higher in the wet season and the falls are much more impressive, though you can only swim in Devil’s Pools (on the Zambian side) during the dry season. The night-time tours to see the moonbows add another dimension to this UNESCO Natural World Heritage Site, especially for those who have visited before. 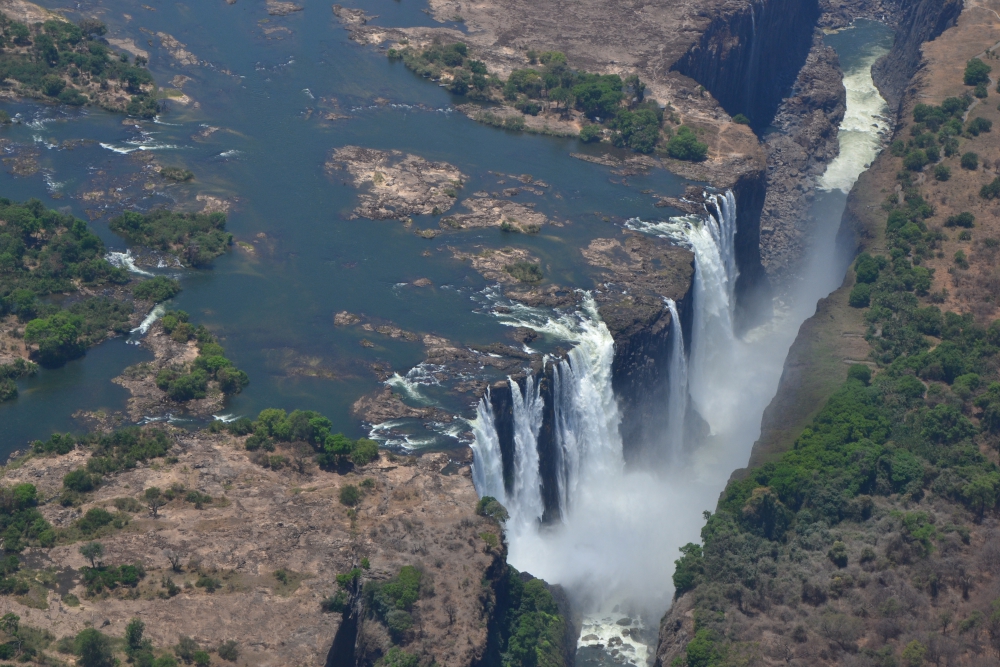 Where to see it:

Moonbows can be seen from Victoria Falls National Park and Victoria Falls Bridge. The Eastern Cataract on the Zambian side also offers a spectacular viewpoint over the aptly named ‘Rainbow Falls’. 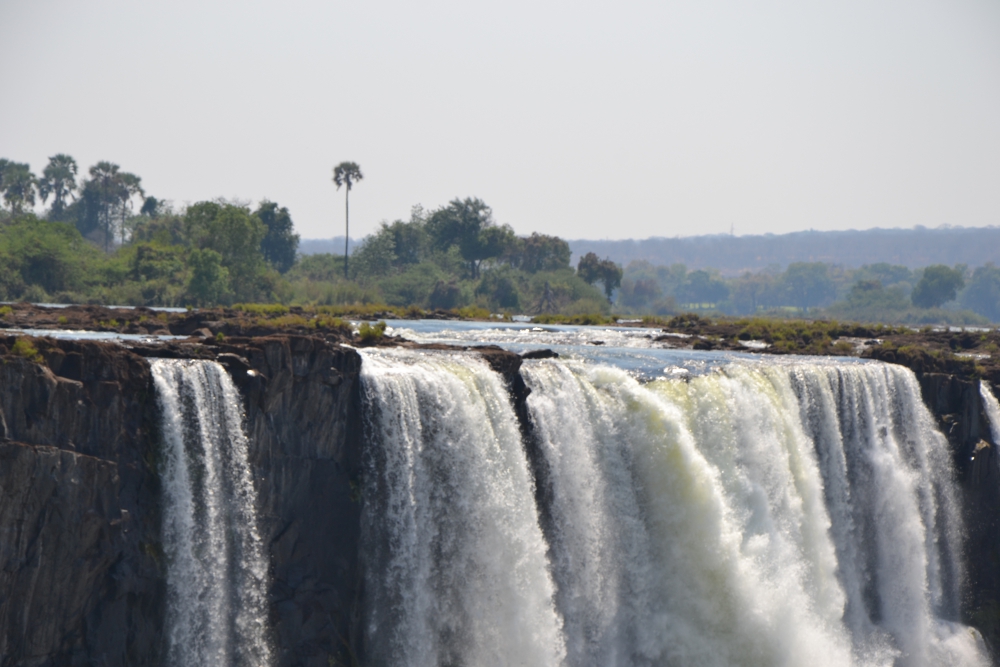 The Vic Falls Hotel, also known as The Grand Old Lady, is the epitome of luxury and has the best views of Batoka Gorge and Victoria Falls Bridge, which connects Zimbabwe and Zambia. It’s the oldest hotel in town, as it was built in 1904 as accommodation for those building the Zimbabwe section of the Cape to Cairo railway.

This grass thatched lodge looks out onto a watering hole that’s often visited by elephants, buffaloes, warthogs, a variety of birds and other animals. It’s the hotel’s main attraction and can be seen from nearly all the rooms, the restaurant, viewing deck and swimming pools. Warthogs are seen mowing the lodge’s green lawn on a daily basis.

While The Vic Falls Backpackers may be a little out of town (around 3km), it’s been voted The Best Hostel in Zimbabwe for two years running, thanks to its rustic vibe, fish foot spa, swimming pool, extensive activities list and daily BBQ evenings. 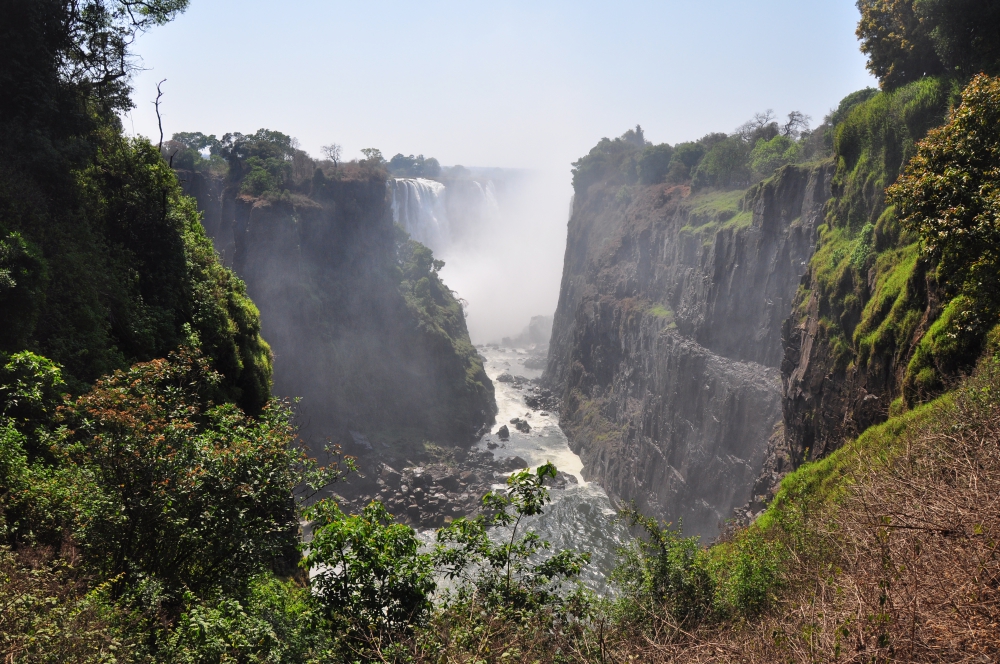 Lunch: The Wild Horizons Look Out Cafe sits on the edge of the 120-metre deep ravine and although the views are spectacular the food is just as commendable. No wonder it remains one of the most highly rated restaurants in Vic Falls according to TripAdvisor reviews.

Dinner: The Boma, which adjoins The Vic Falls Safari Lodge, offers a buffet dinner with game meat, such as smoked crocodile, guinea fowl, buffalo stew and dried mopani worms. Dinner is served with a side of African drumming, which you can try for yourself, and dancing too. 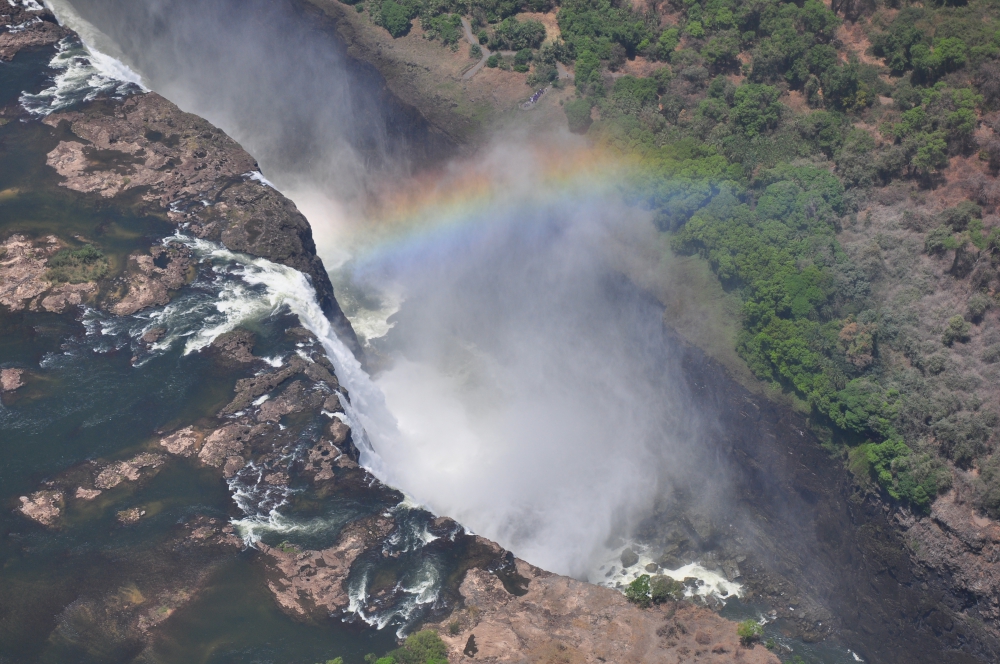 Africa Odyssey asked me to share some Zimbabwe travel inspiration with you based on my most recent trip to Zimbabwe, Zambia and Botswana at the end of last year. All opinions remain my own, but you already know that.