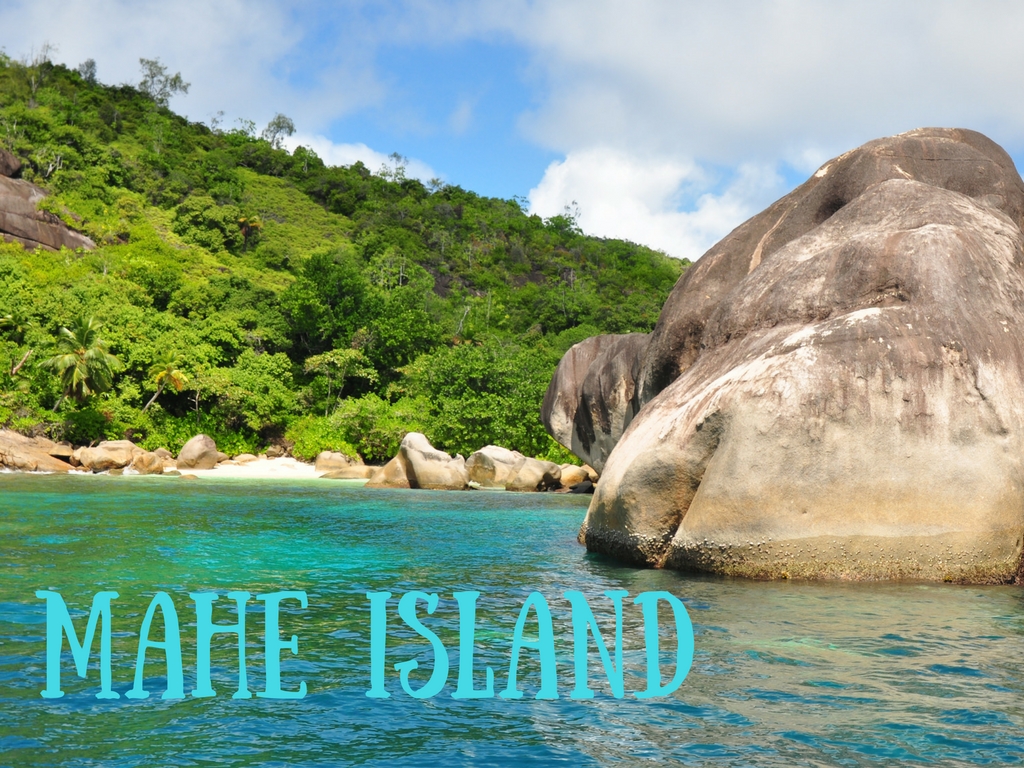 On maps, the Seychelles seems like mere blips in the sea and in terms of land area they cover just 450km2. But these blips are spread over 1.4 million km2 of ocean, so there’s a vastness to the 115 islands and islets that make up this enchanted Indian Ocean archipelago. They are necklaced by granitic inner islands (Mahé being the biggest at 155km2) and surrounded by outer coralline islands.

Situated just a few degrees south of the equator, there’s a remoteness here that’s very real. Brochures like to brag about the Seychelles being 1 000 miles from the nearest foreign land. And yet, people have been arriving for centuries, giving rise to a Creole heritage that’s an intermingling of French, British, Indian and African influences. 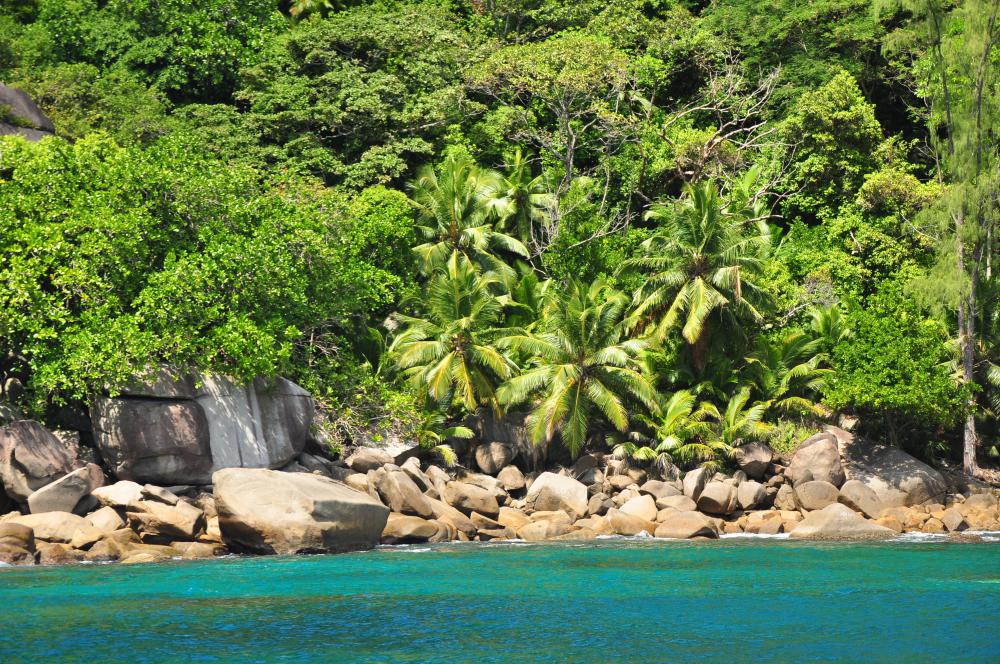 But a trip to the Seychelles is not to be rushed. And although it is a fairly pricey destination, rushing simply doesn’t fit in with the island vibe or the nature of the Seychellois people. It’s the kind of place you should sit with your feet in the sand, sipping a cocktail mixed with the local Takamaka Rum, as the sky turns the colour of island holiday.

That’s exactly what I did when I first arrived at the five-star Savoy Resort and Spa along Beau Vallon Beach. It was then that I decided to spend as much time as possible in, on, around or looking out towards the water. And so I spent my days swimming, snorkelling, scuba diving, sitting on beaches (not for too long though), taking to the waves in a boat or on the saddle of a bike cycling from one beach to the next. 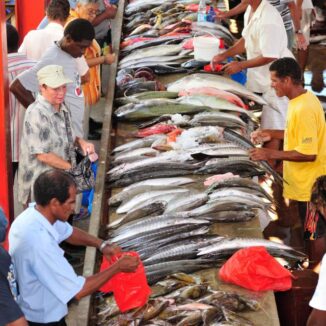 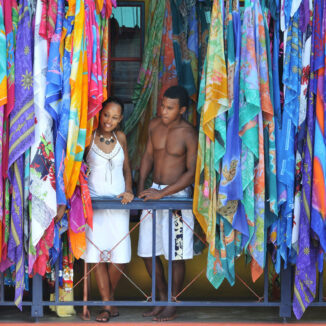 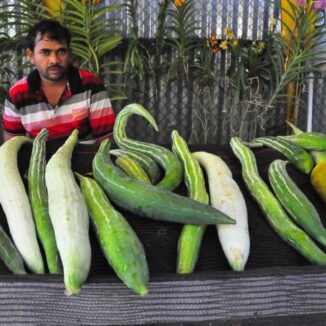 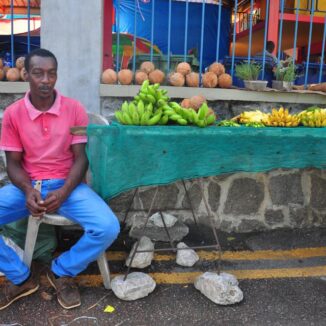 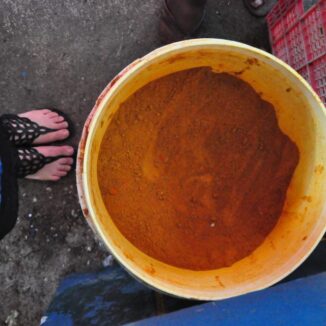 Much like in South Africa, I taste the cultural diversity in the food too. As I walk through the Sir Selwyn Selwyn Clarke Market in central Mahé on a Saturday morning I see locals buying fresh fish and seafood, straight off the boats. A bottle of home-made Creole Sauce is the most authentic souvenir to take home, in my opinion. It’s made from olive oil, finely chopped garlic, onions, chilies, parsley, bell peppers and tomatoes, with a hint of lemon juice. The stalls also sell dried herbs, spices, flowers, home-grown vegetables, while curry powder is sold by the cupful from a plastic drum. 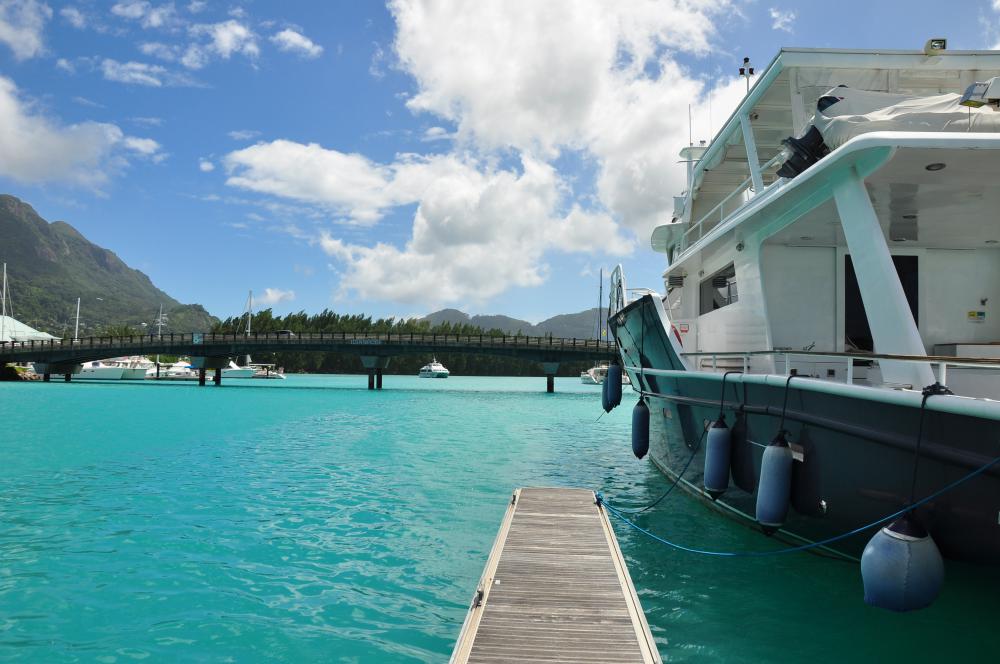 There’s a saying in the Seychelles that God created the island nation with sailors in mind. That much I won’t dispute. It’s a place where: the most popular tipple is rum, masts bob at the Eden Island Marina, fresh seafood tops every menu, restaurants come standard with ocean views, and you can take your pick of boating souvenirs at the Esplanade kiosks.

As I gear up for my first open-water scuba descent, thanks to Big Blue Divers, I listen to veteran divers extolling the virtues of these waters. The diving, they say, compares favourably with Hawaii and the Bahamas, the Dead Sea and the Great Barrier Reef. At Bay Ternay Marine Park, I discover this wonder for myself as I glide between the coral reefs. I am struck by the vivid hues and extraordinary patterns of fish with compelling names: Moorish idols, clown fish, and rainbow parrot fish. 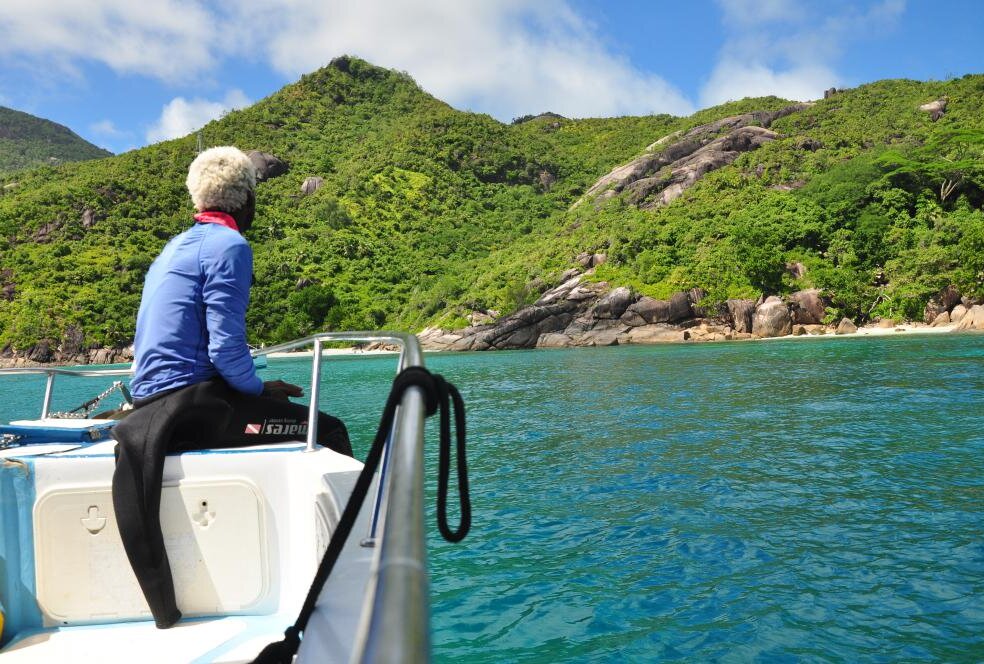 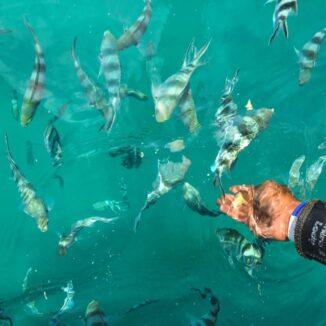 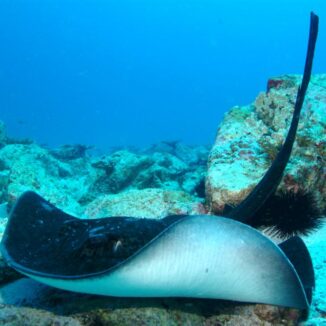 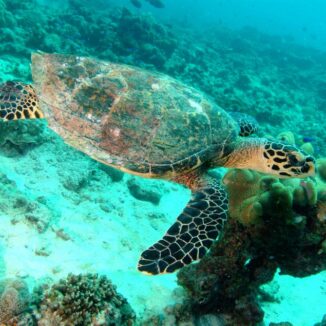 There’s plenty to wonder at on land too. Around 70% of Mahé consists of untouched forest. Sans Soucis (meaning 100 eyebrows) mountain pass reaches from one end of the island to the other. It makes me feel as though I’m driving through a nature reserve. The road leads to Mission Lodge, where Queen Elizabeth II sipped tea, during her 1972 visit, looking out over the ocean.

Mahé’s peaks are a trove of hiking trails. There’s the three-hour hike up Trois Freres (Three Brothers) the mountain with three peaks. While the steep 45-minute trek up Morne Blanc rewards you with spectacular views of Mahé’s southern tip from its summit. 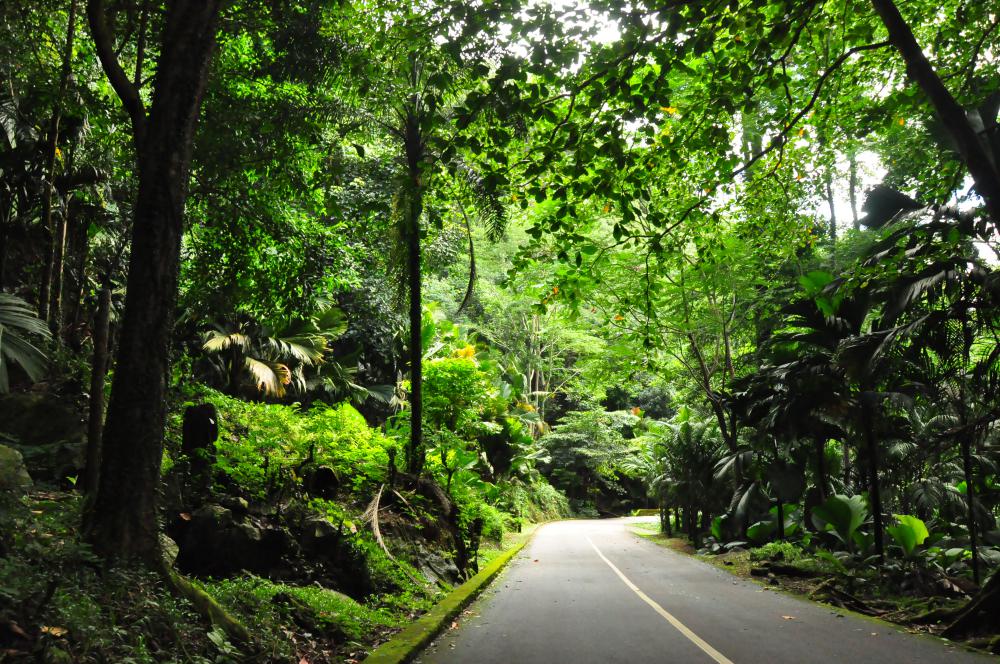 And there are adventures to be had as well. At Constance Ephélia Resort, I buckle up my harness and fly through the forest canopy on a zipline course that stretches between eight different platforms. Before the final platform, the turquoise waters of Port Launay Marine Park appear seductively from behind the leaves. “That’s where we’ll cool off,” my SMAC Adventures guide tells me. 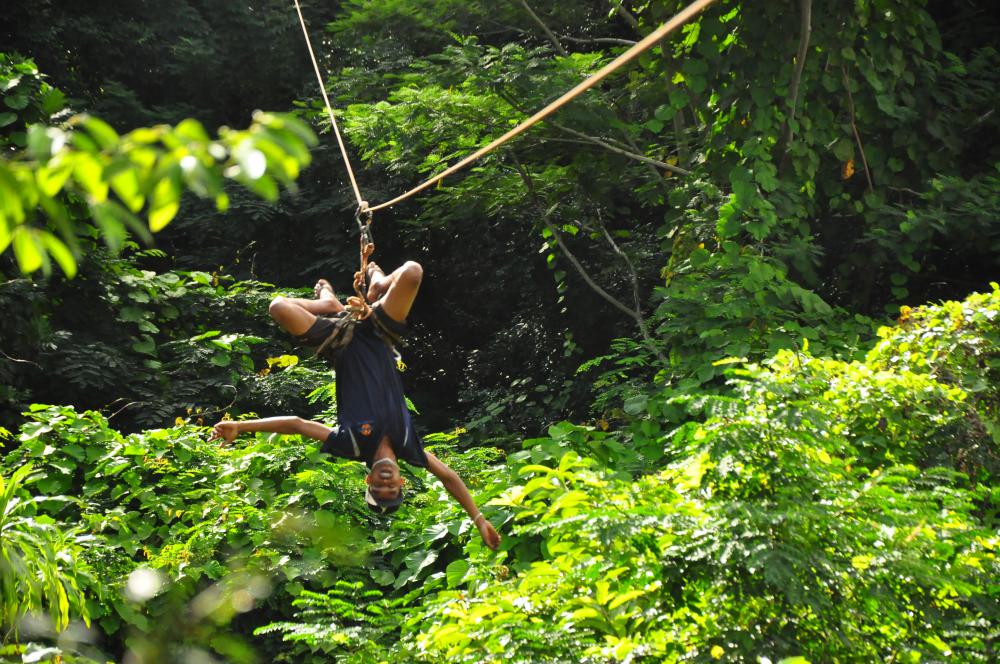 But to earn a dip in the sea, I first get a taste of one of Mahé’s tougher exertions: rock climbing. With my chalked fingers and a pair of borrowed climbing shoes (they don’t smell, I checked), I pick the easiest of five routes up the 18-metre-high granite rock. There are mounted finger holds, plus the assurance of guides who know every crack and crevice, but the challenge and sweat are real. I manage to reach the top and then abseil back down and give one of the more difficult climbing routes a bash. 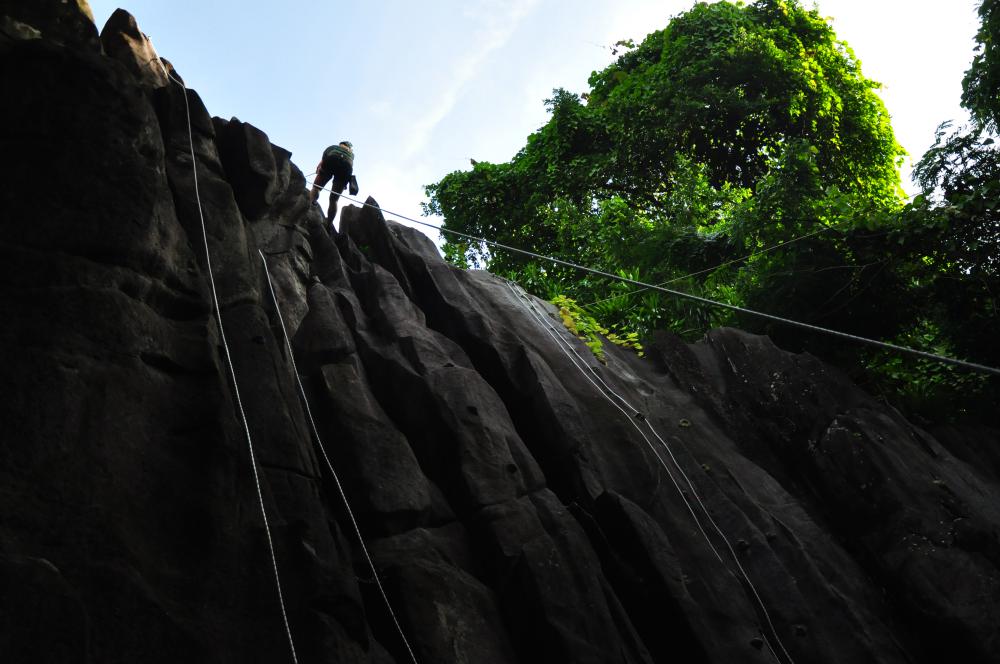 The Seychelles was not quite the lazy, feet-in-the-sand island getaway I’d anticipated, but that’s just how I travel. And later, while floating in the warm shallows of Port Launay, with a crisp Seybrew beer in hand and the sun melting into the water, I knew I had discovered my ultimate Indian Ocean paradise. 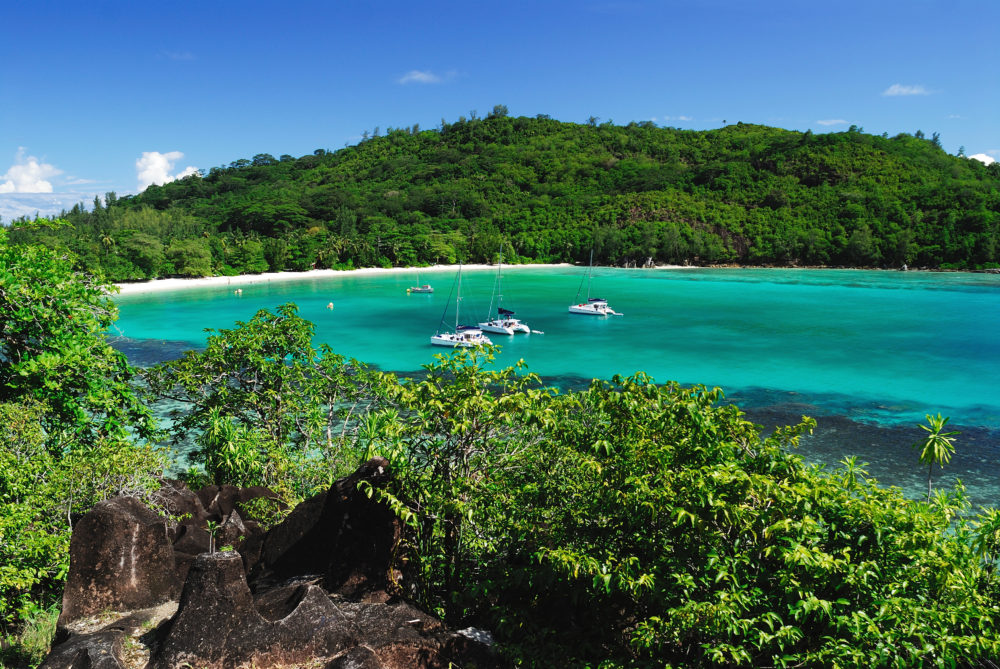