The ancient city of Anuradhapura

It might take some time and practice for the name to roll off your tongue smoothly. Anuradhapura is an ancient city, which was the capital of Sri Lanka for a thousand years. The Buddhist dagobas, high-rise temples, ponds and ancient palaces are vestiges of the cultural, religious and architectural importance of Anuradhapura in Sri Lanka’s history. What makes Anuradhapura striking is that it’s still inhabited, with the new city center arising at the foot of the ruins. It is classified as one of the oldest continually inhabited cities in the world, which is something to write home about. By now you must have already guessed that it’s a UNESCO World Heritage Site. Anuradhapura was the capital of Sri Lanka from the 4th century BC until the 11th century AD, when it was replaced by Polonnaruwa. This long reign has allowed it to nurture an extensive history, which intrigues visitors. The ancient city is spread over an area of forty square kilometres and is best explored by means of a tuk tuk. Expect to pay between Rs1 500 – 2 000 for a five-hour tour, which is sufficient to view the entire ancient city, unless you’re a keen explorer, like me, in which case you’ll need a full day.

I had dreamt about visiting Ruwanwelisaya since the moment I opened my guidebook and saw a photograph of it on the first few pages. This particular dagoba has become synonymous with Anuradhapura. Buddhist worshippers and amazed tourists flock to this Buddhist stupa, either to pay their respects or to observe its architectural splendour. It is 91m high and has a circumference of 290m, which classifies it as one of the world’s largest monuments. Stupa, or dagoba, literally means heap. It is a mound-like structure constructed from bricks, mud and clay. It serves to protect Buddhist relics, such as precious metals and stones that are inside. Stupas are venerated as places of worship. This one in particular is protected by a square wall of steadfast stone elephants. 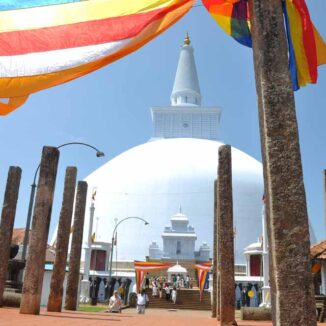 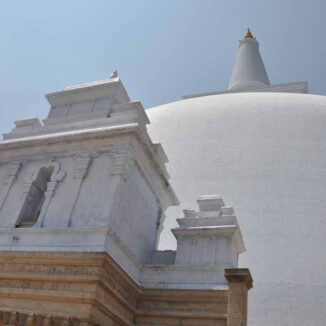 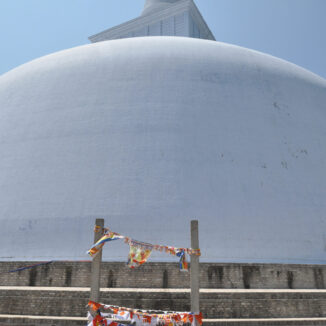 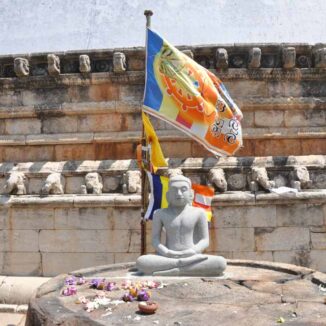 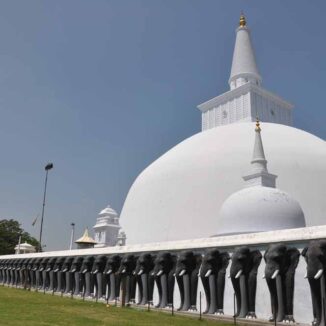 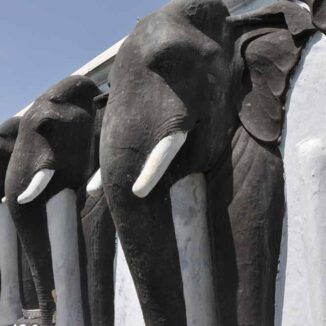 Jetavanaramaya is the largest and tallest entirely brick structure in the world. It was the biggest structure after the Pyramids at Giza, when it was first built in the 3rd century AD. 93.9 million bricks were used in its construction, which took 15 years. It used to tower at 176 metres, however since it was damaged by the Tamil Tigers it stands at 122 metres. Unlike Ruwanwelisaya it’s not covered in clay nor is it painted, instead you can see its natural brick face. A part of Buddha’s belt is believed to be the relic that is enshrined in this colossal dagoba. Here you’ll find the carving of the seven-headed Naga snake, which protects Buddha. 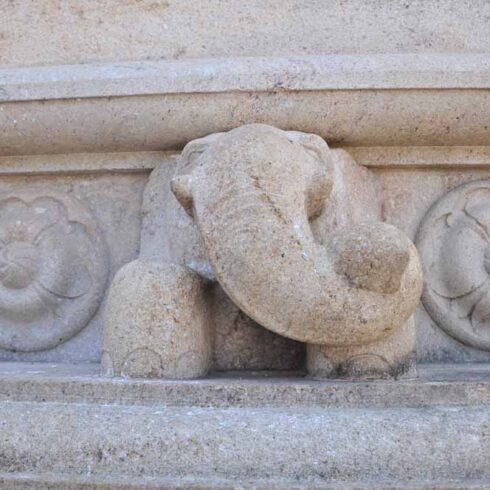 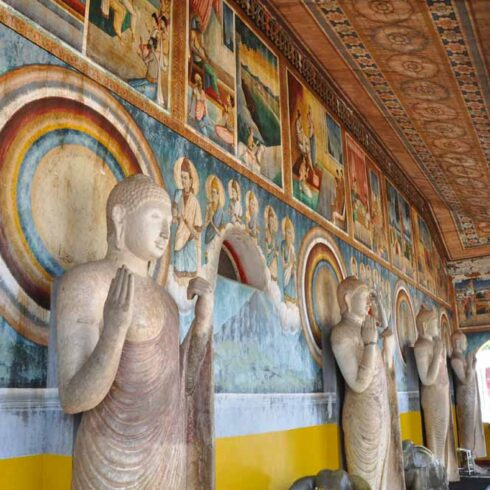 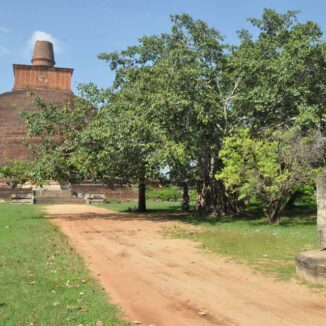 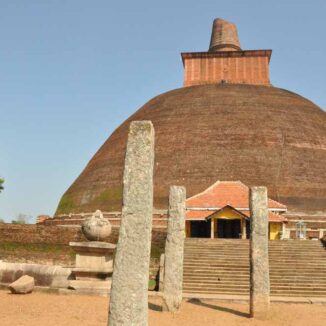 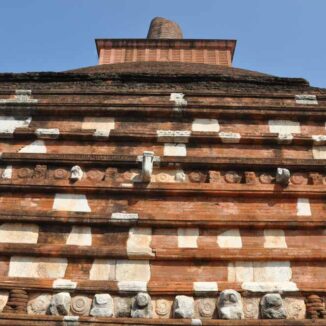 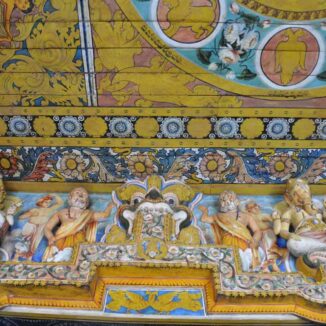 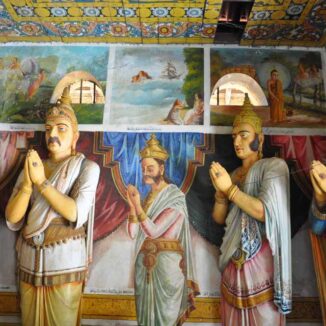 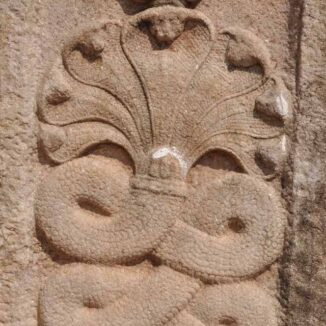 Sri Maha Bodhi Tree, or the sacred Bodhi tree, is the oldest authenticated tree in the world. During its lifespan of 2,000 years it has been protected by numerous guardians. It’s believed that the tree was planted from a clipping of the original Bodhi tree under which Buddha achieved enlightenment, hence it’s an important place of pilgrimage. Buddhists tie colourful flags, which absorb their wishes and desires, as close as possible to the tree.  ‘Sri’ is a formal word denoting respect, as seen in Sri Lanka. 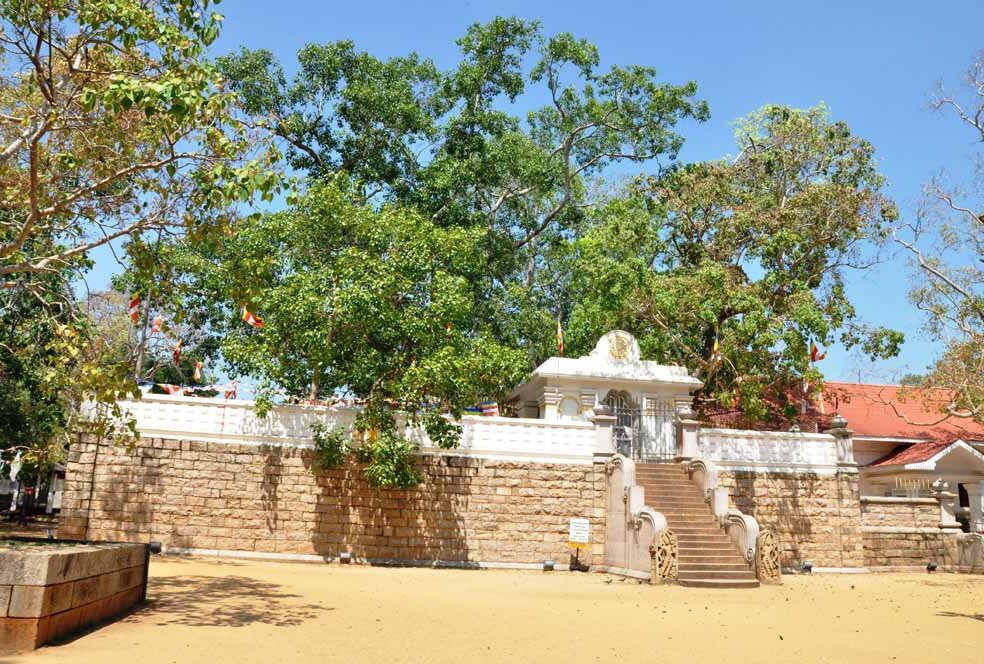 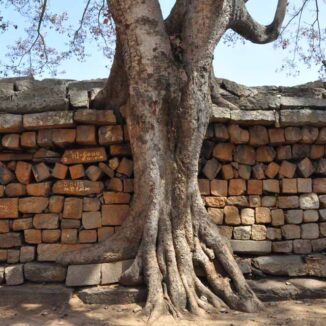 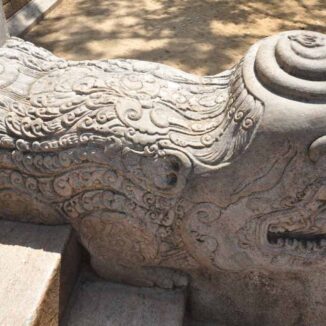 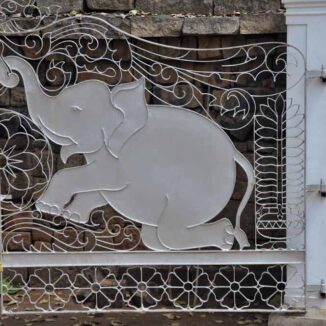 One thousand six hundred columns are most of what remains of this nine-story building, which was rumoured to have housed at least 1,000 monks. Its name derives from its bronze roof. Here I witnessed an interesting Buddhist ceremony. 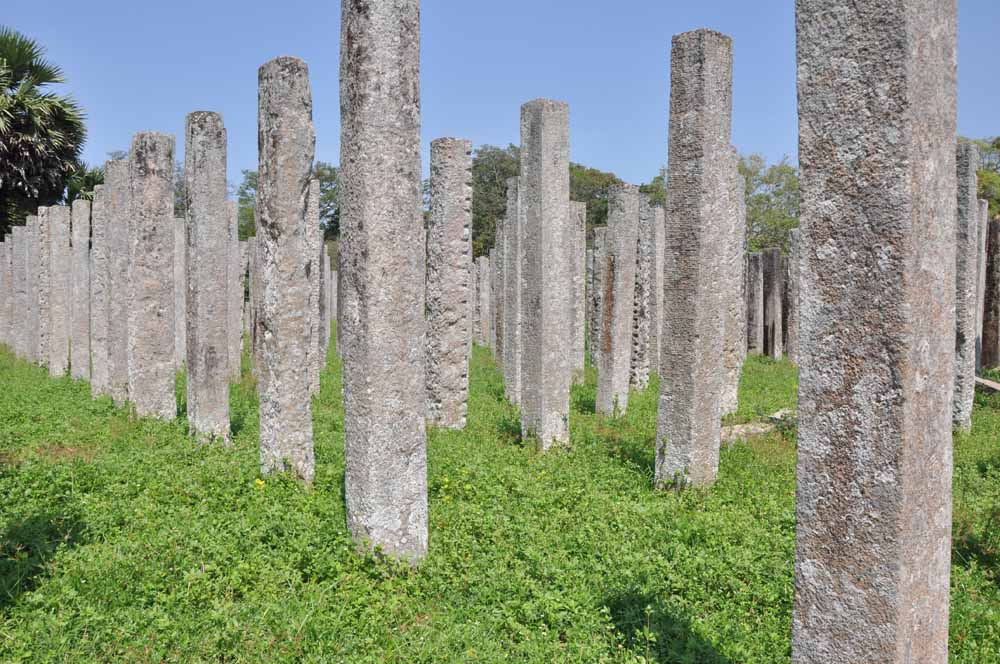 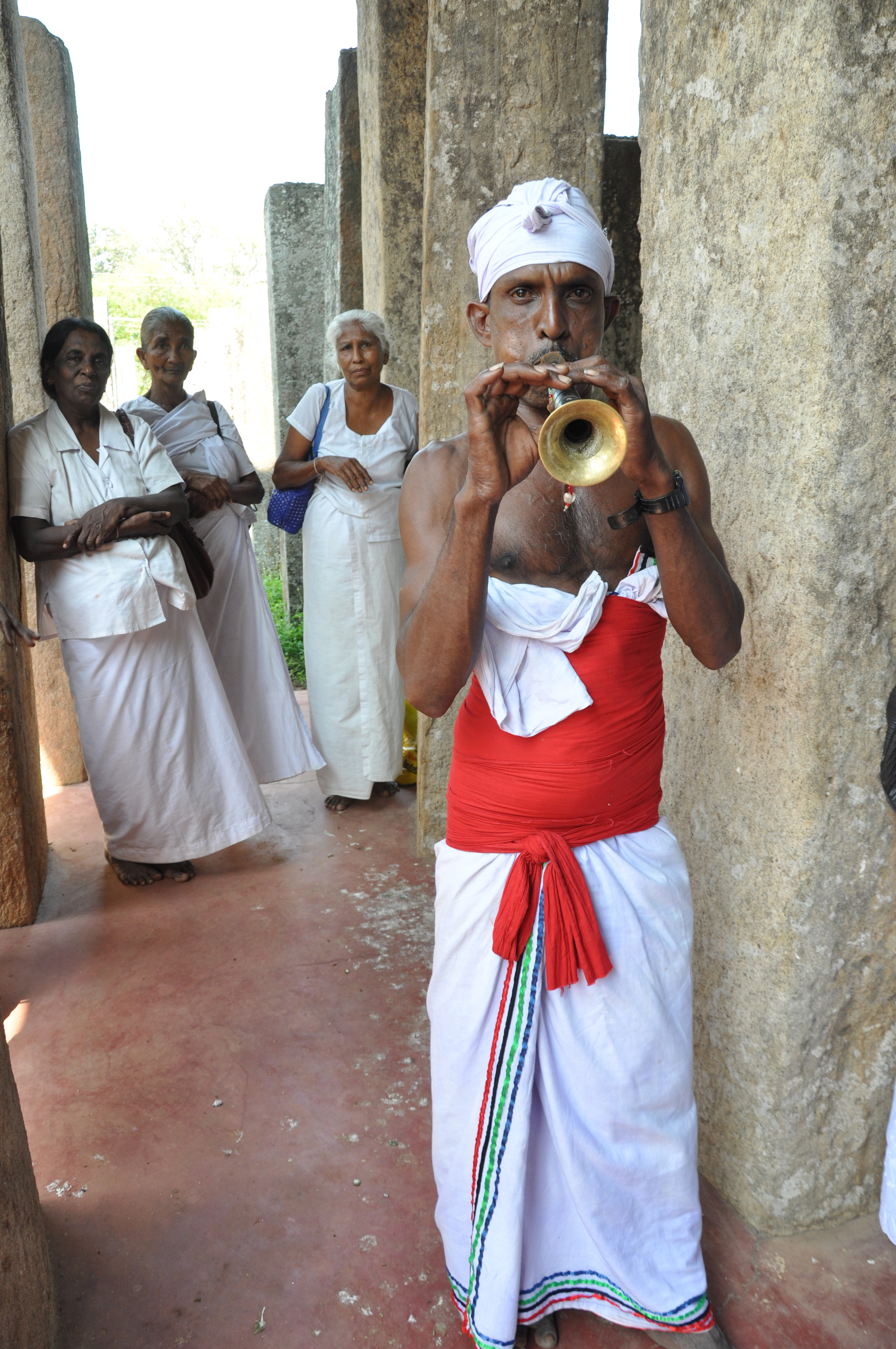 These two ponds are not ‘identical’ twins as they are not symmetrical. Their name purely derives from their proximal position in relation to one another. They used to serve as bathing grounds for monks from the nearby monasteries. They resemble Olympic sized swimming pools more so than ponds. The northern pond is 40m in length whereas the southern pond is 28m in length. The water flows from the larger to the smaller pond by means of an underground pipe. 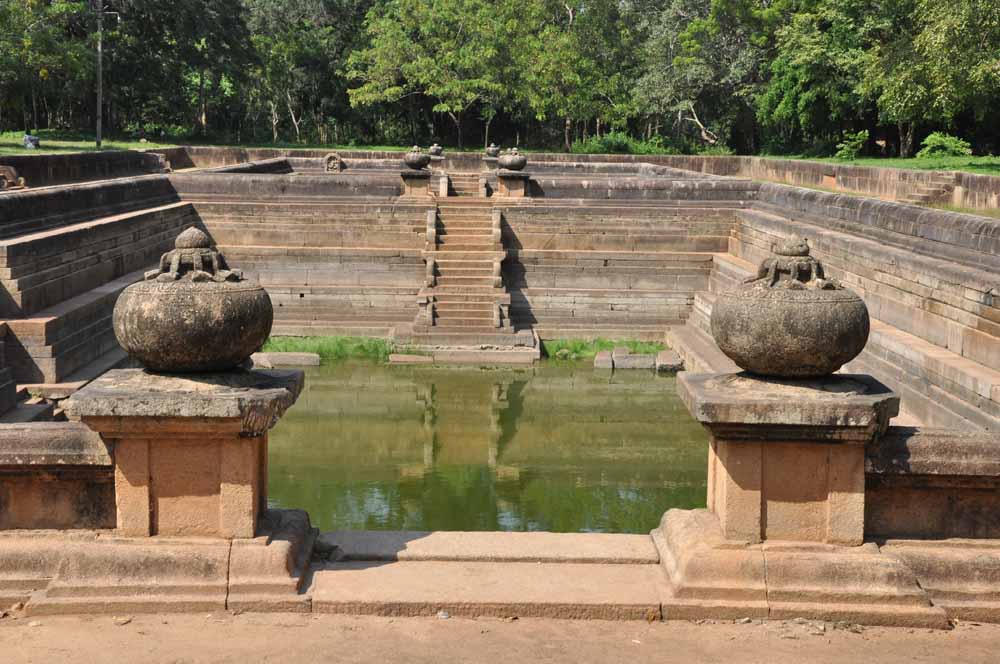 This ‘kitchen’ houses a large trough, which was filled with rice. Legends suggest that the Buddhist monks, sat side by side on the edge of the trough and helped themselves. Here we tested the accuracy of an age-old sundial. And let me tell you, it was pretty much on the dot accurate. 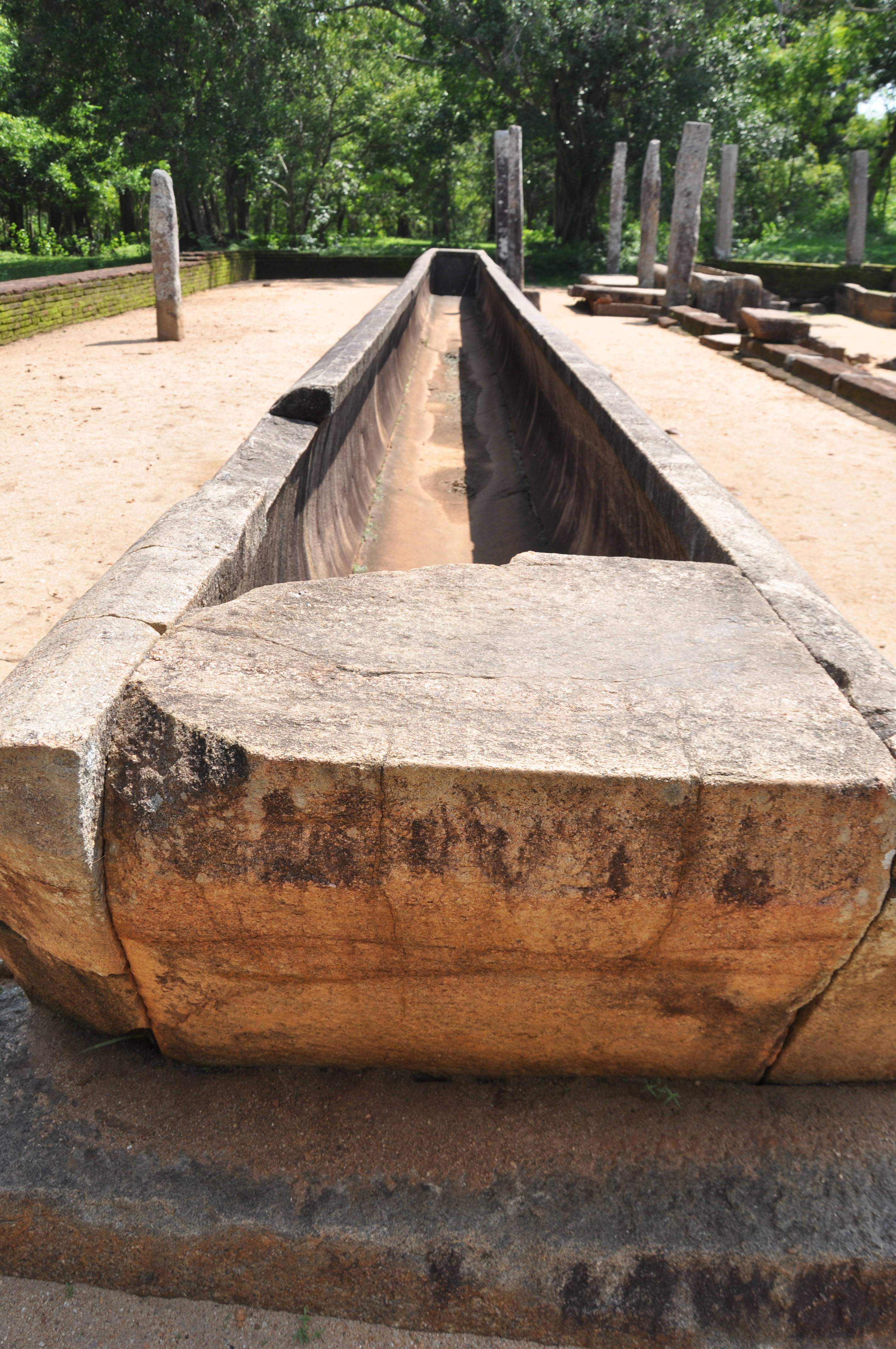 This rock temple is more commonly referred to as the ‘two lovers’ temple. Here you’ll find the Sri Lankan version of two star-crossed lovers, which predated Shakespeare’s Romeo and Juliet by around 1,000 years. Near the square pool, carved into the rock are two elephants playfully splashing in the water.

This palaces is within a small woodland. The famous moonstone has been duplicated in miniature form and is a popular memento among tourists. 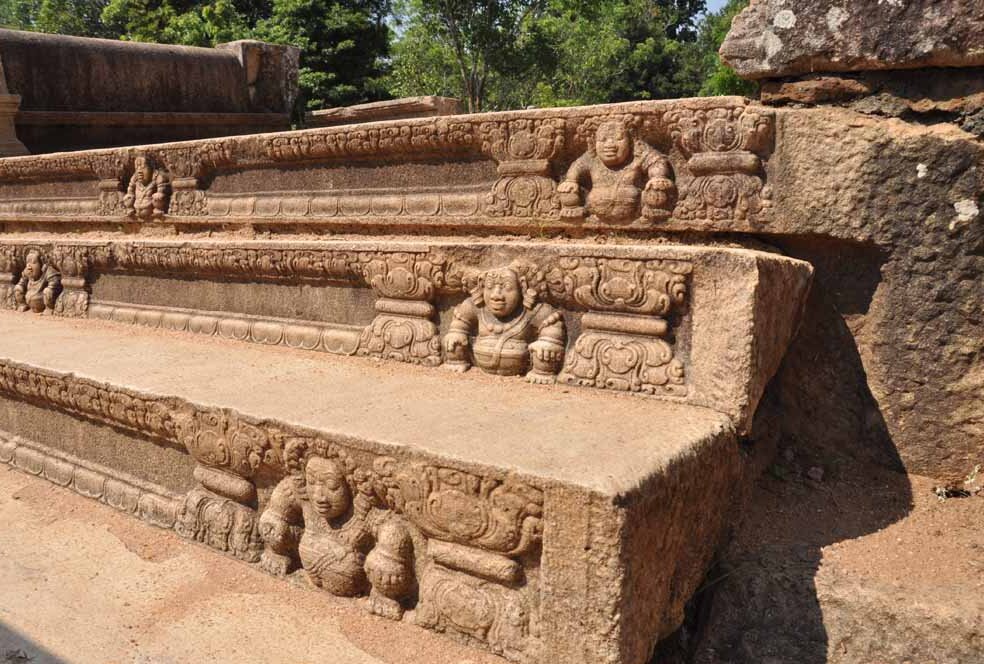 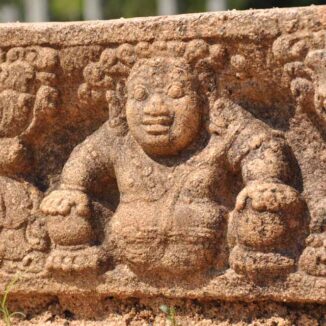 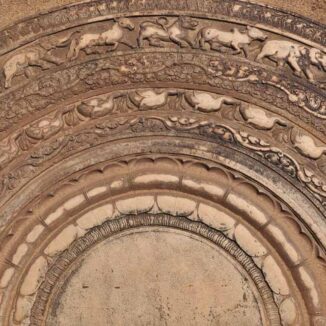 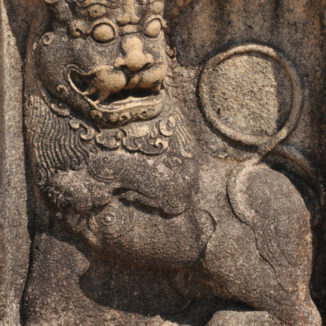 Thuparama is one of the oldest dagobas in Sri Lanka. It’s surrounded by two rows of stone pillars and has an orange band around the circumference of the dome. 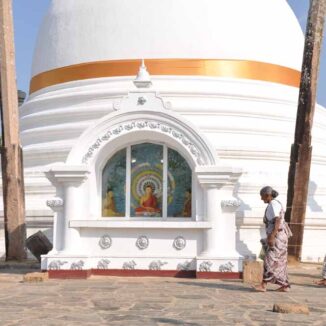 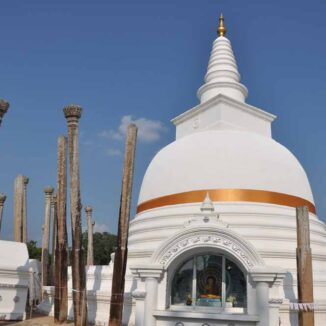 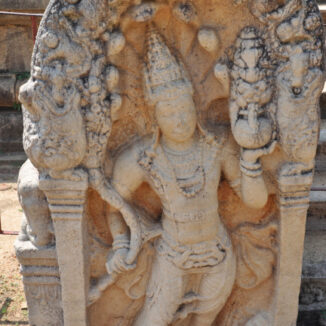 Being amid this living museum of  artifacts bestows a sense of reverence for human ability and achievement. Read more about my journeys through Sri Lanka, which remains one of the top three countries I’ve visited.