Jeju: Island of the Gods

The ‘Island of the gods’ is an appropriate name for Jeju – the largest island located off the southern tip of South Korea. The island is mostly made up of fertile igneous rock, which came about from a volcanic eruption. The subtropical climate cultivates luscious vegetation and so it’s no wonder that Jeju is also called the ‘Little Hawaii of Korea’. I spent five days weaving my way in and out of streams of newlyweds. The picturesque island is the most popular honeymoon destination for Koreans and attracts five million tourists each year.

As I arrived at Jeju Airport (a one-hour flight from Seoul) early on Wednesday morning, I happened upon four other international backpackers, or rather they happened on me. None of them had an international driver’s license (yes, it’s necessary, even on a small island such as Jeju) and I was more than pleased to half my costs. Together we navigated the winding, narrow roads with an incoherent, blabbering Korean GPS – all on the opposite side of the road. The coastal road carefully traced the perimeter of the island, like a young child learning to write. It protruded to offer us a sneak preview of the precipitous cliff faces and at times burrowed deep inland where we witnessed the locals’ rural way of life. Our adventure began in Jeju-si, the northern most tip of Jeju Island. 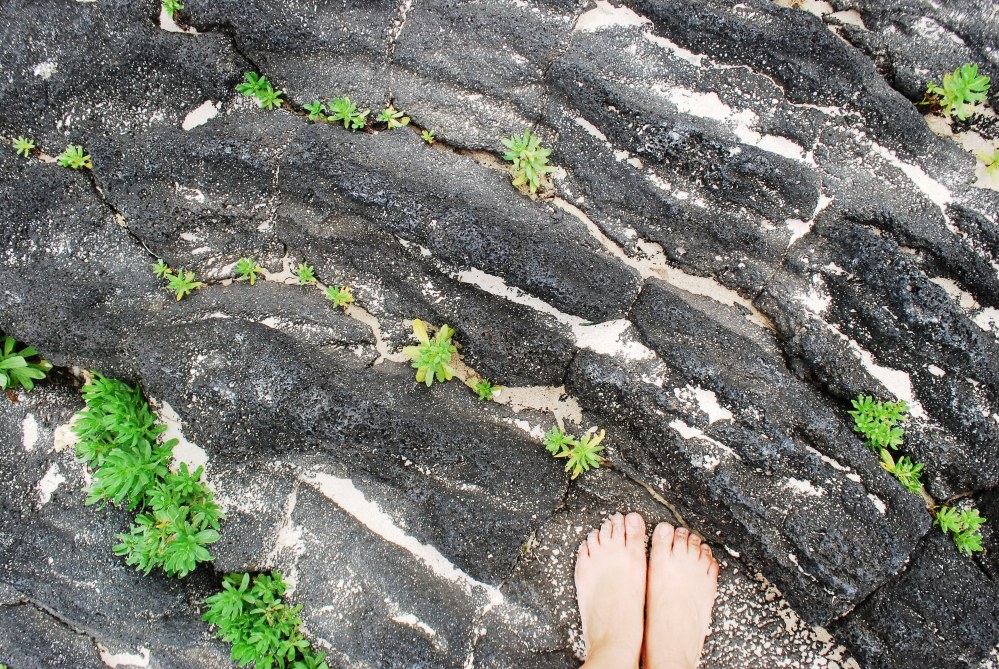 It soon led us to Yongdu-am: a dragon-shaped volcanic rock 10 metres high and 30 metres across. Locals reveal that the King sent his dragon to Halla Mountain to find a herb believed to give eternal life. However, an arrow from an angered guardian spirit protecting the mountain fatally injured the dragon. His body sank into the sea and turned into rock, the head remained above the water seemingly trying to return to the sky.

We drove from the northern most tip of Jeju, along the west coast and spent some time unwinding on the most popular beaches where we weren’t permitted to swim. The breakers were far out of sight and yet the red-clad lifesavers diligently patrolled the calf deep waters with a rescue buoy in hand and whistle in mouth. We defiantly wandered away from the main beach when we were pursued by local fishermen, presumably because we would scare away their catch, but on second thought perhaps because they were sincerely concerned for our safety. Swimming, it seems, is not the most popular pastime in South Korea, with most Koreans living in sky-high apartment blocks and many children attending academies or other popular extra-curricular activities, such as Taekwondo, art or piano. Once they were gone we naturally, almost instinctively, edged our way back into the waters, hoping we’d sneak beneath the watchful gaze of the lifeguard tower. 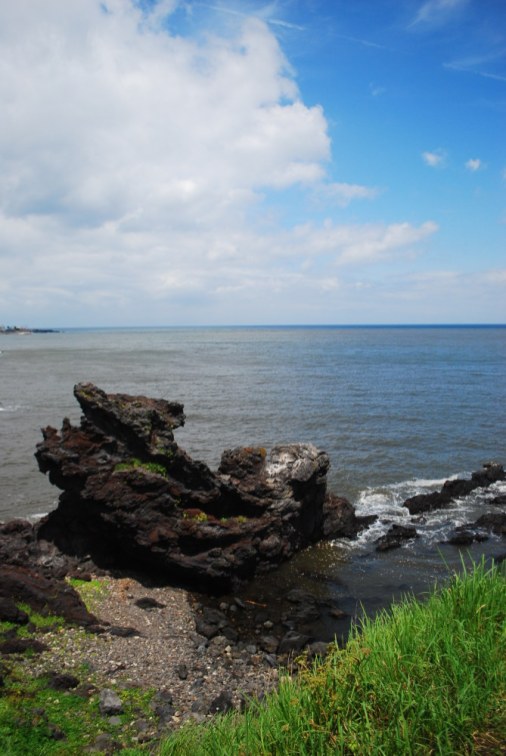 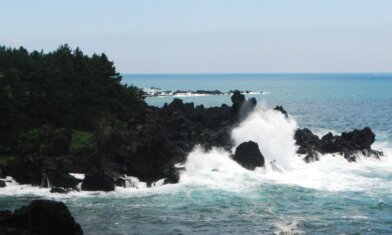 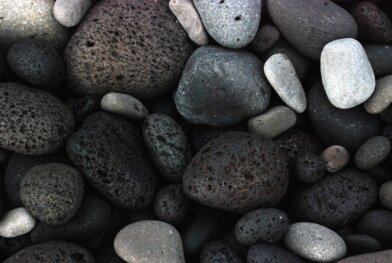 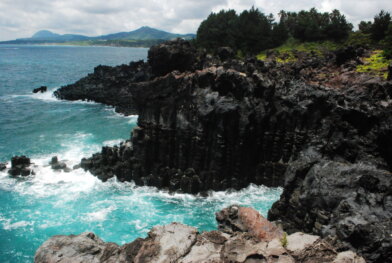 We reached Sanbang Mountain as the sea swallowed the sinking sun. Sanbang means ‘mountain room’. Its name refers to the cave that seems to have been meticulously carved out of the rock, so as to enclose a Buddhist statue. It stands beneath a trickle of fresh spring water, which collects in a marble basin below. The water bestows its drinker with a blessed, long and healthy life, which is why so many Buddhists come to this sacred place to pray. The 395-metre-high, bell-shaped mountain emerges, without warning, from the tranquil flat grasslands, breaking the harmonious flow of land into water. Its unusual shape is explained by the legend that a hunter, who was shooting arrows at a white deer near the peak of Halla Mountain, missed and shot the king of heaven in his bum (oops!). The Halla spirit ripped off the peak of the mountain and threw it at the hunter, killing him instantly. The resulting crater became the Baek-rok-dam Crater or Paengnoktam.

On the second day, we explored the numerous waterfalls of the region. We took a leisurely stroll through the exotic vegetation, which includes some of Korea’s rarest plants and has thus been proclaimed a Korean natural monument. The path led us to Cheonjiyeon Waterfall, which means ‘God’s pond’. The name derives from the folktale about the seven fairies who served the king of heaven. They graciously descended to earth on a stairway made from clouds to bathe in the sparkling pond – its pure water is designated as Natural Monument No. 27, in case you were wondering. It’s one of the few natural habitats of the Mutae eels, which are also proclaimed Natural Monument No. 258. Weird, right? But at least Korean are serious about preserving nature, which I deeply admire. 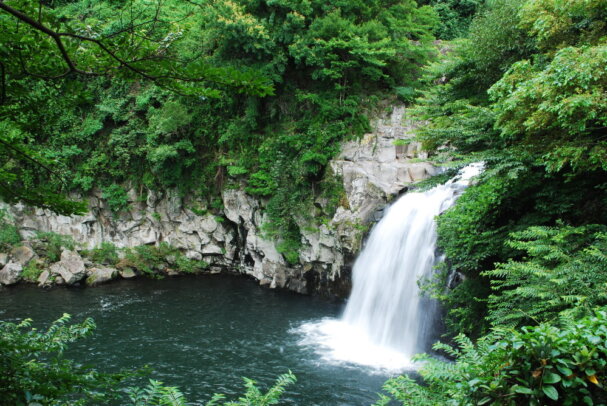 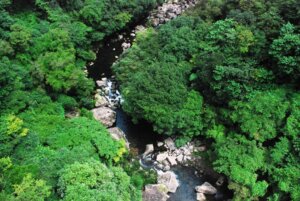 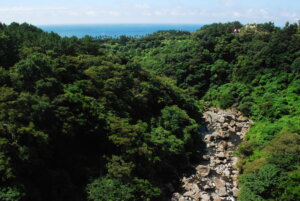 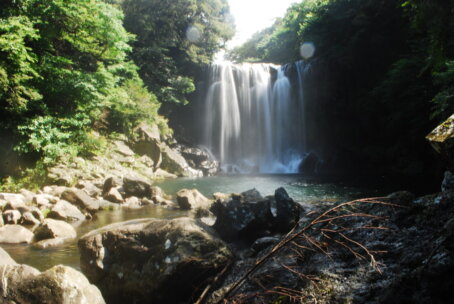 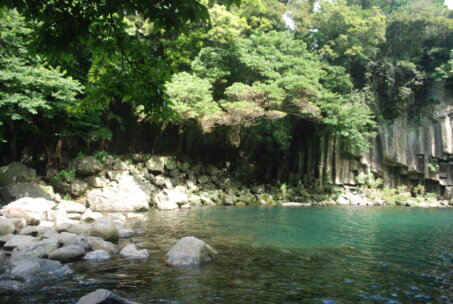 Jeongbang is the only waterfall in Asia, never mind South Korea, that cascades off a steep cliff and flows directly into the sea. It’s a view to behold. The sunlight pierced the water vapour created by the water’s tumulus fall, like scattered pick up sticks, only to disappear again once the mist rose skywards. This time completely ignoring the ‘no swimming’ sign, we took a dip in the nippy pool. It was revitalising after the humid heat had inadequately pasted our clothes to our skin. I was fascinated to see that once we took the plunge (you’ll have to excuse the pun, mind you, you’ll find many of them throughout this website) many Koreans soon followed suit. 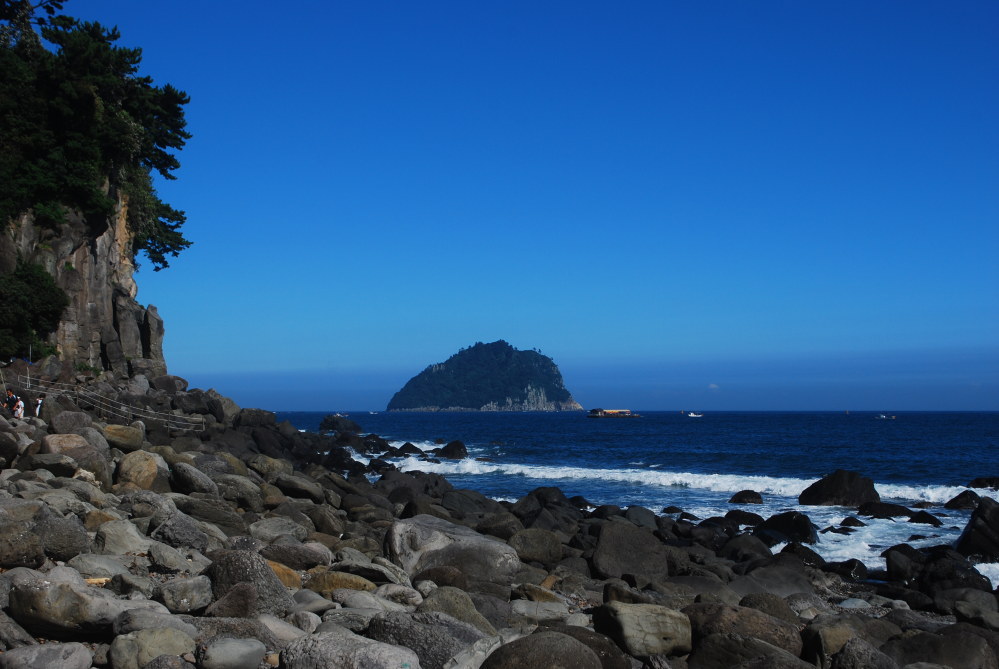 Jungmun on the southern coast of Jeju is known for its fascinating lava rock formations. The square, hexagonal and octagonal pillar shaped joints silently emerge from the sea until the crashing waves reveal their presence through loud splashes.

On the morning of our third day, we awoke grateful for the foggy relief and ready to climb Halla Mountain. It is South Korea’s highest peak and towers at 1,950 metres above sea level. On a clear day the mountain is said to be seen from anywhere on Jeju Island. The remainder of the island is speckled by about 360 smaller “Orum” cones, which surround Halla volcano. We were advised that a round trip would take us 9 hours. This was probably calculated according to ‘ajoshi’ standards (a middle-aged, married Korean man), whereby hiking is incomplete without stopping at each rest stop to have a mouthful soju (you guessed it, Korean rice wine). So, we were rather proud of ourselves when we returned to our starting point seven hours later, this considering that we spent at least an hour atop the peak. Although the ascent was very strenuous at times, the hiking trail on the eastern slope was 19km long, every step and drop of sweat was worth the view at the top. The volcanic crater that greeted us is over 400m in diameter and cradles a lake called Paengnoktam. Hallasan National Park is a UNESCO biosphere reserve as it houses over 1,800 kinds of plants, 4,000 animal species and 3,300 species of insects. It comes as no surprise that it too is a Korean Natural Monument (no. 182). 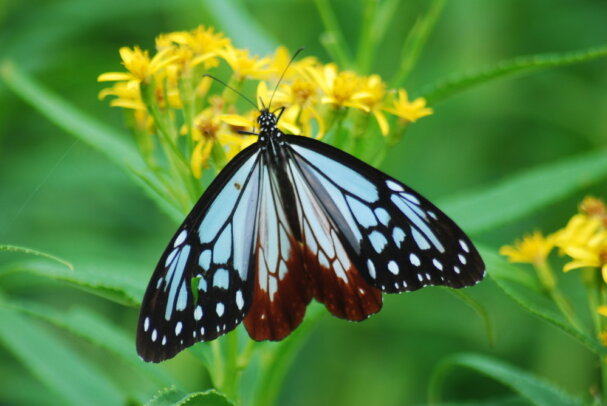 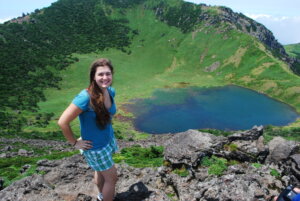 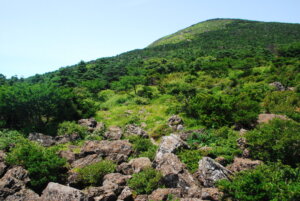 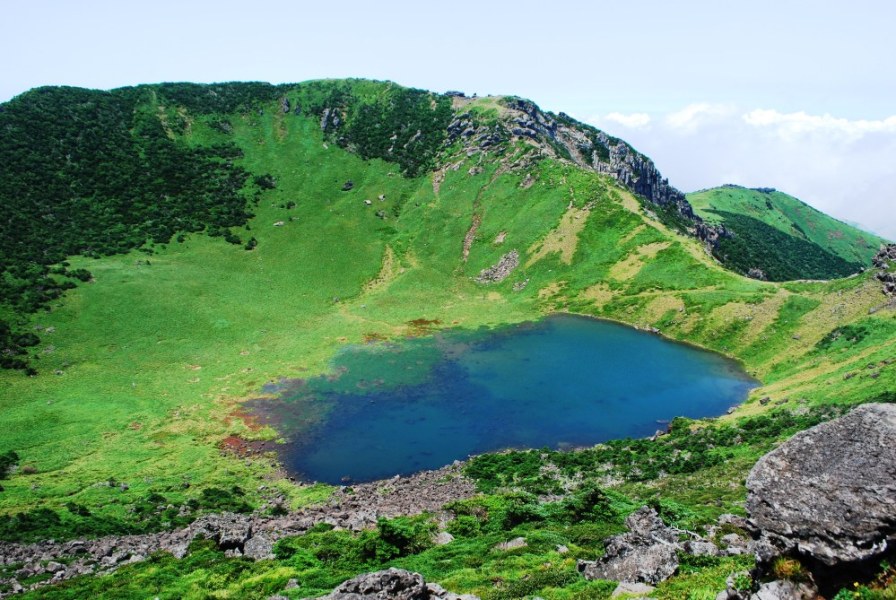 Songsan Ilchulbong, in south-eastern Jeju, is commonly referred to as Sunrise Peak because it’s a natural viewing deck of some of the most colourful sunrises and sunsets. It’s also a popular location of many Korean movies. It was our first stop on the morning of our fourth day. This dormant volcanic cone has a circular smooth concave crater that looks like an upturned palm. The brief yet strenuous ascent up the steep stairs was a reminder of the previous day’s exertion. 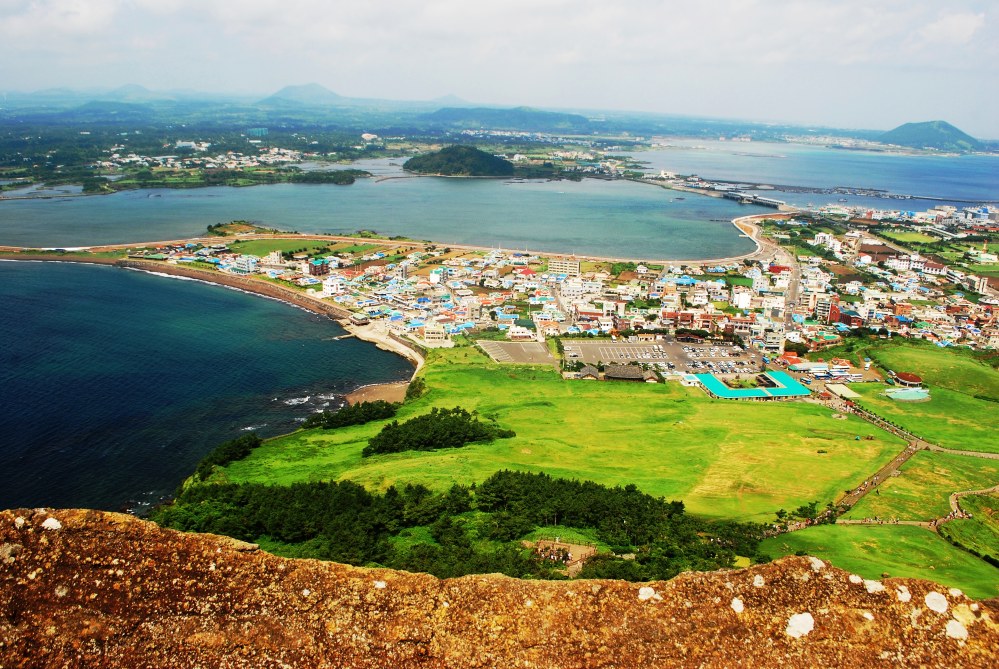 Later, we descended into the dark depths of Manjanggul – one of the world’s longest lava tubes. And guess what? Manjang lava cave is Natural Monument No. 98, due to their length (over 1km), massive volume, intricate passage configuration, well preserved internal lava features as well as their scientific and educational value. Lava lines are still visible on some of the cave walls.

We spent the rest of our day beach hopping along the north-eastern coast, which boasts a few of the most scenic beaches on Jeju island. The coral white beaches and black volcanic rock were contrasted with crystal clear turquoise water – this is not a convenient cliché. See for yourself. 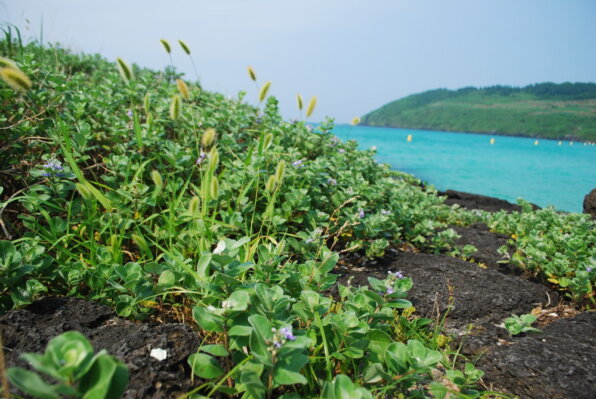 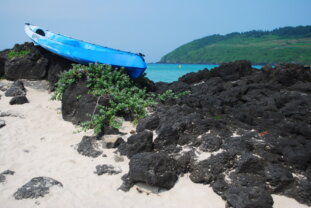 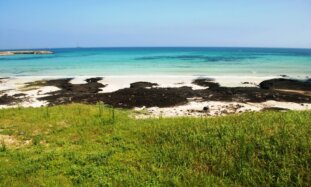 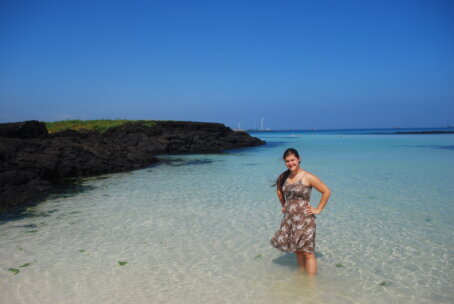 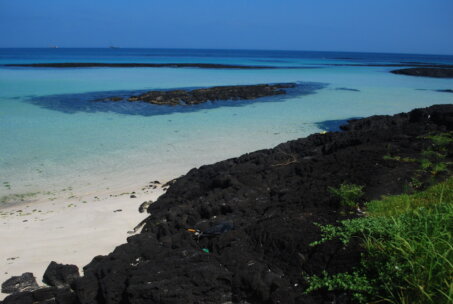