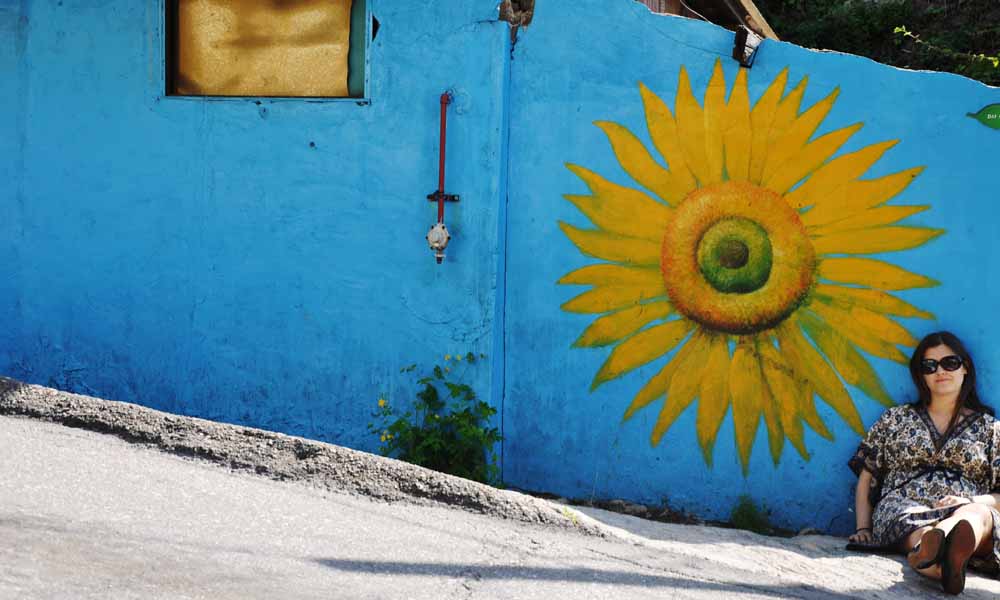 Captured by an age-old spell, Lilliput – also known as Gaemi Maeul or Ant Village to the locals – lies hidden in the hills near Bugaksan in northwestern Seoul. Once I passed through the portal, like the one found in The Lion, the Witch and the Wardrobe, I was greeted by Magnetism, who drew me in further with his charming smile.

In Gaemi Maeul, you will find whiskered flowers, larger than life Lego men, and characters from Alice’s Adventures painted on the walls of houses. It’s a place of wonderment, where the roofs of some houses, that are perched along a steep street, only reach my shoulders. In this dimension I am tall.

Ant Village is loved by keen-eyed observers, who run with anticipation as something intriguing catches their eye… pause… and continue on their way. Even the Gaemi Maeul village buses possess ant-like characteristics – they trudge up and down the hill on a regular basis like a worker ant delivering food to the ant hill and leaving in search of more. 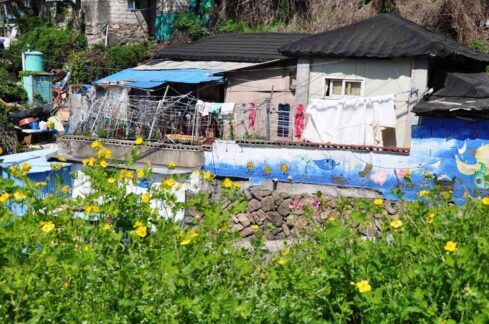 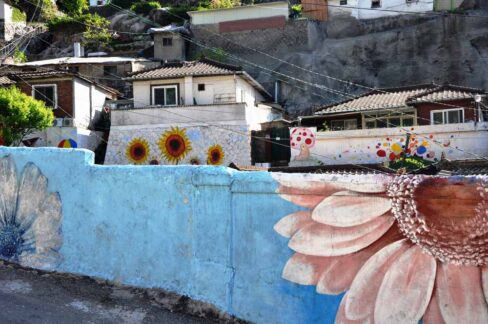 When I visited the flower murals coaxed Spring out of her winter retreat, and she emerged in an attempt to outdo them. Keep your eyes open and you might run into the Hookah-smoking caterpillar from Alice in Wonderland. In the tale he is three inches tall: “A very good height indeed,” he claims. And so he fits in perfectly in this miniaturised landscape. I felt as though I had eaten from his mushroom: I grew even taller as I ascended the hill. My heart warmed as I noticed a ‘half step’ staircase – a smaller step in the middle of a smaller-than-average step.

With a monarchical air about me I settled on one of the steps. As I sipped on the Gatorade a friendly local gifted to me (I never drink sports drinks, but the kind gesture was well-timed as I was thirsty), I observed the sun-drenched world around me. The houses were basking in the afternoon sun, while those ambling about below had shrunk to the size of Thumbelina and could fit between my forefinger and thumb. The nearby bobbing dandelions seemed to cue the faeries, goblins and butterflies to peer out from behind their hiding places. 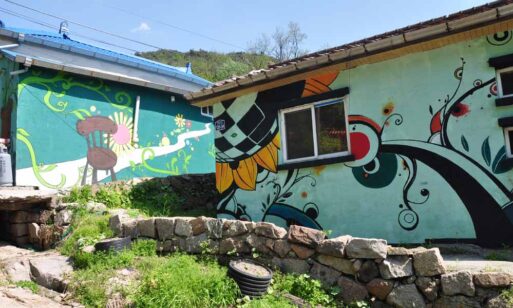 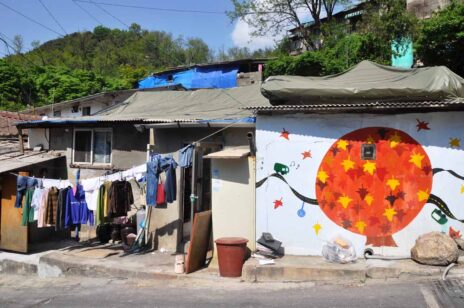 This whirlwind of seemingly psychedelic experiences was fueled by a Mazzy Star soundtrack and a combination of the rising heat and vivid colours. This Ant Village is a child’s dream-world playground as it’s filled with smiling clouds and origami animals in any direction you look. One mural on the main street is painted in colourful ddongs – the Korean ‘euphemism’ for your… you know, bowel movements. For some unknown reason Koreans are fascinated with this particular abject subject and ddong has entered into Korean popular culture. It is often the colourful subject of art. Children refer to it as D-D-O-N-G, for fear of saying the name in full. These particular colourful ddongs are disguised to look like paint samples.

Some of the streets are an ideal place for a learning driver to master clutch control, or for an athlete to train for a full marathon. The further you descend down the hill the more modernised it becomes, until finally you return back to reality.

There are a number of similar mural villages around Seoul. Why not visit Naksan Park too. And here are more ideas of what to explore while visiting South Korea. 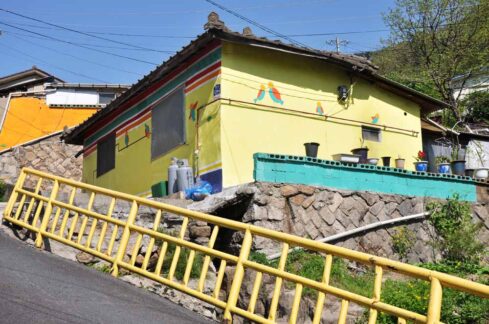 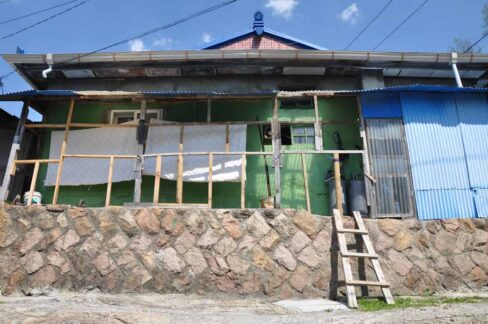 What you need to know before you visit Gaemi Maeul

Ant Village is located in Hongje-dong, in Seodaemun District in northwestern Seoul. Get out at Hongje Station (subway line 3, exit 2). Here’s the Hongje Station timetable to help you plan your journey and travel time. In front of you there is a bus stop. From there take the village ‘Maeul’ bus number 7. It takes less than 15 minutes to get there and Gaemi Maul is the last stop at the top of the hill. You’ll surely recognise it when you arrive.

How to get around Seoul

What I miss most about living in Seoul (well, one of the many things) is the cheap and efficient public transportation system. Yes, it may get rather packed especially in peak hours, but it sure works, is efficient and affordable. Be money-savvy and use the subway and/or the local buses to get around South Korea’s populous capital city. Here’s the official Seoul Subway website and map, which will help you work out a route that takes the shortest amount of travel time, the shortest distance or requires the least amount of transfers. A single journey ticket using a T-money card costs 1 250 won (R14.75 or $1.15 or £0.86) and 100 won more if you’re paying with cash or your credit card. Otherwise take a taxi (look out for the orange- or silver-coloured sedan taxis as the black ones are deluxe and come with a surcharge). 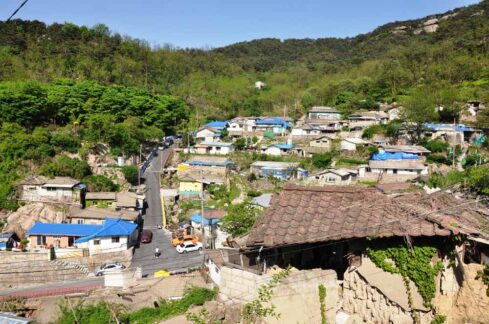 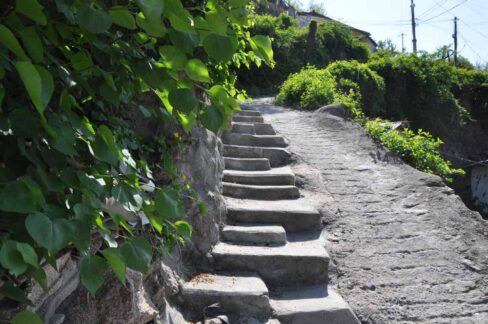 Are you lost en route to Gaemi Maeul? There’s always help at hand

Ask the locals, they’re super friendly and even if they don’t speak English they will find a way to help you out, whether it’s using Google translate on their smartphones or asking someone else nearby who does speak English. Also have a look at the Official VisitKorea website or call the multilingual, 24/7 Korea Travel hotline on 1330 (calling from South Korea) or +82-2-1330 (calling internationally) from a landline, smartphone or skype.

What else is there to do in Seoul?

I’m glad you asked, because there’s so much more to do and and explore in Seoul from tea ceremonies to traditional performances, hikes, temple stays and rooftop dinners. I made an effort to see and do as much as possible during my two years of living in Seoul. Some of my highlights include:

Otherwise read my archive of posts from South Korea. 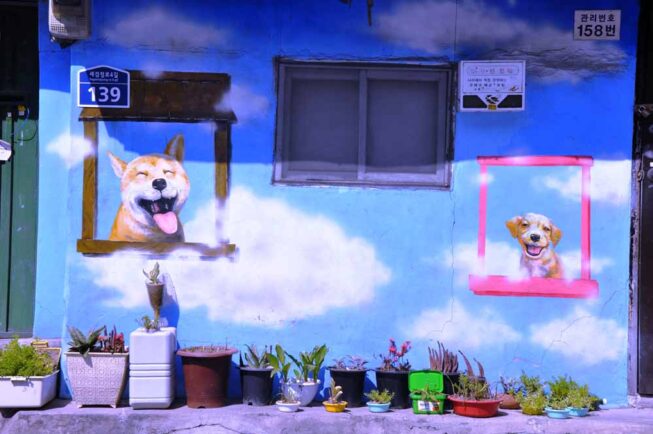 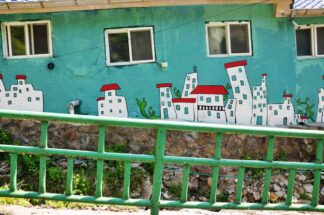 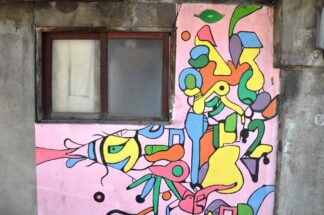 Do I need a visa for South Korea?

South African travellers are granted a 30-day visa-free entry to South Korea, alongside the residents of 105 other countries (depending on nationality and passport type), which are granted visa-waiver entry for the purpose of travel and tourism from 30 to 90 days.

When is the best time to visit Seoul?

South Korea has four distinct seasons. Spring (from late March/early April to late May) is spectacular for its cherry blossoms. Summer (June to August) is hot and very humid. Try to avoid the monsoon season (from early July to late August) if you can, as sometimes flooding does occur. Autumn (September to November) is beautiful with its colourful fall foliage and milder temperatures and minimal rainfall. Winter (December until February, though sometimes March can still be chilly) sees snow and low temperatures though public transport services continue and the underfloor heating is cranked up. 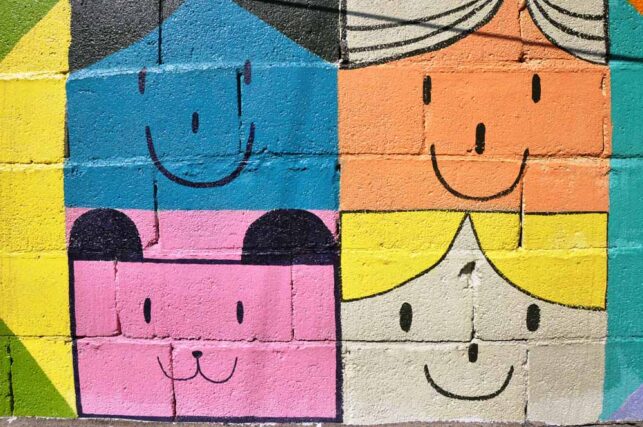 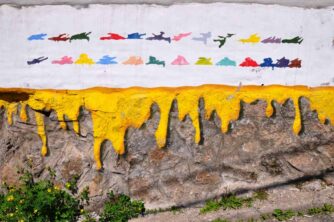 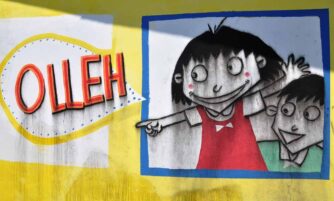